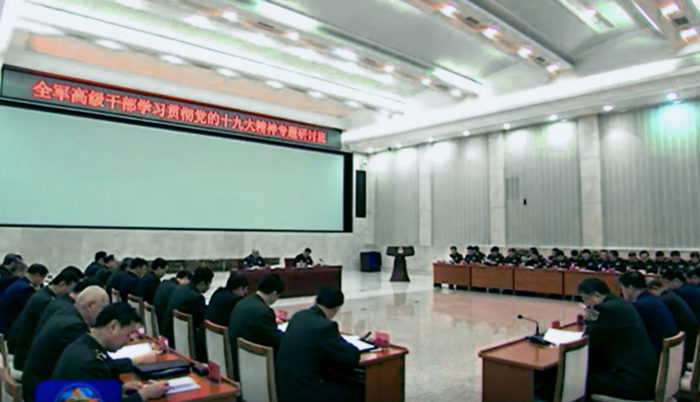 ◎ China’s top military brass was very likely summoned to Beijing for the study seminar to declare their loyalty to Xi Jinping following the death of Zhang Yang.

All senior military leaders attended an education course on “implementing the spirit of the 19th Party Congress” at the Beijing National Defense University from Dec. 4 to Dec. 9, according to state military media.

In total, 74 leading generals from the various key military work units and the Central Military Commission (CMC) were present for the six-day seminar. CMC vice chairs Zhang Youxia and Xu Qiliang separately addressed the opening session and the closing session, and they called on the military leaders to “resolutely obey Chairman Xi’s commands, be responsible to Chairman Xi, and let Chairman Xi be at ease.”

On Dec. 6, provincial-level officials attended the first round of compulsory education courses in Beijing at the Central Party School. In total, seven rounds of courses will be held from December to April.

Our take: China’s top military brass was very likely summoned to Beijing for the study seminar to declare their loyalty to Xi Jinping following the death of Zhang Yang. This development suggests that the political situation in China is presently unstable, and confirms our earlier analysis that the factional struggle between Xi and Jiang Zemin will escalate after the 19th Congress.

The Xi administration is now facing immense pressure from an unsettled military, mounting social friction, and increasing financial risks. In other words, the administration is in danger of incurring “grey rhinos,” or predictable, high-impact dangers that can cause severe damage in the event of insufficient preparation.