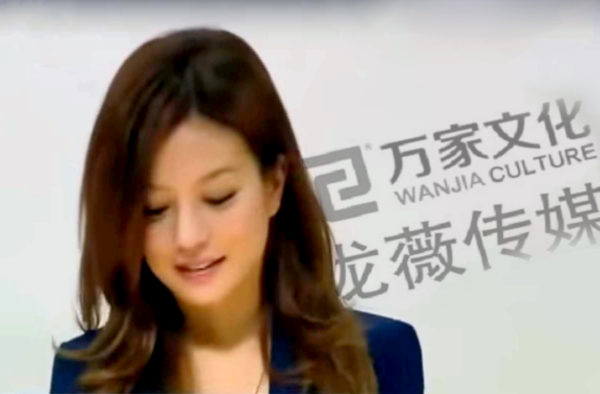 ◎ The probe of the financial sector will affect the princelings and other high-ranking CCP officials.

The China Securities Regulatory Commission punished well-known Chinese actress Zhao Wei and her husband Huang Youlong for several financial irregularities in a takeover bid on Nov. 8. Zhao, Huang and the company they controlled, Tibet Longwei Culture Media Co., were fined a total of 1.2 million yuan ($150,000), and the couple is barred from the mainland stock market for five years.

The backdrop: Tibet Longwei Culture Media Co. is a registered company with 2 million yuan in capital. In December 2016, the company announced that it would spend 3 billion yuan to acquire Zhejiang Sunriver Culture in a leveraged buyout, but gave up the bid for a 29 percent stake in February after Chinese regulators sought additional information on the deal.

According to various sources, the company advising Zhao Wei’s takeover bid is a subsidiary of the Tomorrow Group. Tomorrow Group’s owner Xiao Jianhua was arrested in January, and his arrest is reportedly connected with Zhao’s leveraged buyout.

Xiao is a known money launderer and front desk trader for the high-ranking members of Jiang Zemin faction. He is presently being investigated in Beijing and has reportedly made a full confession, according to intelligence.

Why it matters: Through fining and barring Zhao Wei (punishment that counts as a slap on the wrist), Chinese regulators are putting Chinese financiers on notice. The ongoing investigation of Chinese tech conglomerate LeEco is also another warning before the anti-corruption storm hits China’s financial sector.

Our take: We earlier wrote that Xi Jinping would focus the anti-corruption drive on the financial sector after the 19th Party Congress. This development is already underway following announcements by several ministries and departments, including the Ministry of Public Security.

The probe of the financial sector will affect the princelings and other high-ranking Chinese Communist Party officials, and should be a move that would be popular with the general public. We anticipate the arrest of prominent officials and princelings in the near future.