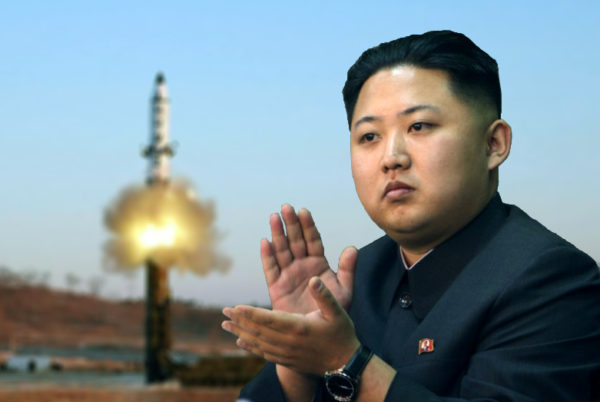 ◎ America has in recent decades been handling North Korea very carefully out of concern that China would intervene in the event of a conflict.

The North Korean regime continued with its nuclear brinkmanship on Sept. 22 with leader Kim Jong Un issuing a belligerent televised statement to President Donald Trump, and foreign minister Ri Yong-ho telling reporters in New York that North Korea might conduct the “biggest ever hydrogen bomb test in the Pacific.”

In response to Kim, who called Trump a “dotard” and promised the “highest level of hard-line countermeasure in history,” Trump tweeted that Kim is “obviously a madman” and “will be tested like never before.”

The big picture: The exchange between Trump and Kim came after the United Nations Security Council passed fresh sanctions on North Korea for testing its sixth nuclear bomb.

Trump and Chinese leader Xi Jinping also agreed over the phone on Sept. 18 to “maximize pressure” on North Korea by enforcing UN sanctions. On Sept. 21, the Chinese central bank told other banks to stop doing business with North Korea, a development that Trump praised as a “bold” and “somewhat unexpected move.” China is North Korea’s largest trading partner.

Why it matters: America has in recent decades been handling North Korea very carefully out of concern that China would intervene in the event of a conflict, leading to a second Korean War. But this scenario now appears unlikely given Trump and Xi’s warm relationship and the present level of cooperation between China and the U.S. on the North Korea issue.

Jiang normalized diplomatic ties between China and North Korea in 1999, establishing a cordial relationship between the Kim family and the Jiang faction. Jiang faction elites like Politburo Standing Committee member Zhang Dejiang and purged security czar Zhou Yongkang have made high-profile diplomatic trips to North Korea in the past, while Jiang Zemin has hosted Kim Jong Il, father of Kim Jong Un, in Beijing when he was leader.

On the other hand, Xi has never met with Kim Jong Un since taking office and has even expressed disdain for the incumbent North Korean leader. Sino-North Korean relationships have stayed frosty in the past five years. Meanwhile, Xi has been rooting out Jiang’s lieutenants and supporters through an anti-corruption campaign and military reforms, and he is poised to fully consolidate his control over the Party at the 19th Congress on Oct. 18.

With the Jiang faction at risk of greatly losing influence at the 19th Party Congress, there is a rising likelihood of armed conflict breaking out between North Korea and the U.S., particularly during the 10-day period before the Congress.

Contact us for more in-depth analysis about North Korea and China.