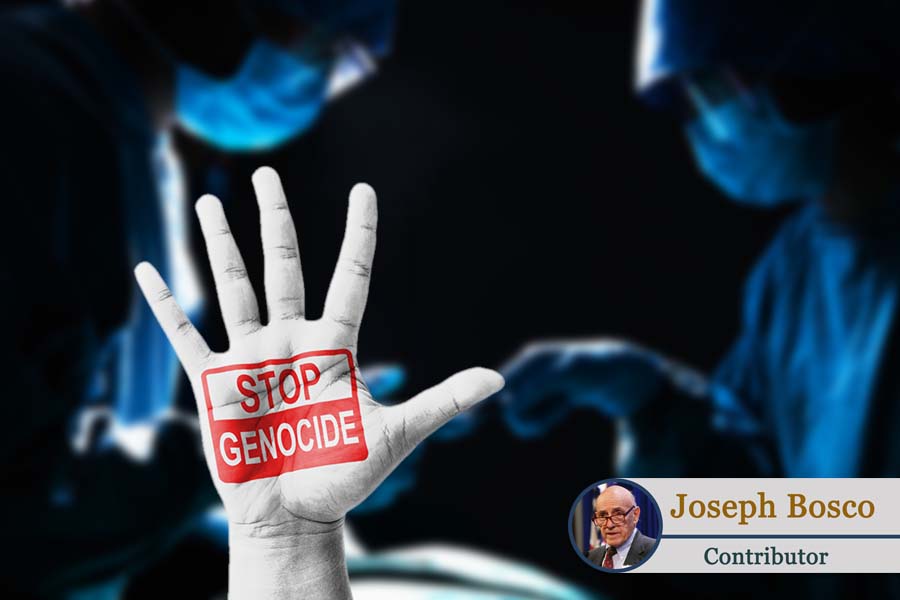 Communist China’s Genocide Must Be Stopped

◎ The world can can build a consensus that Communist China is rapidly approaching, or already has achieved, pariah state status.

After the full horrors of the Nazi Holocaust were undeniably clear even to the most obstinate deniers by the 1940s and 1950s, the international community created a host of institutions, legal codes and moral prescriptions to enshrine one overriding imperative: Never again.

The United Nations, under its charter, would protect international peace and security by regulating how nations treat each other. It prohibits the use of force except in individual or collective self-defense or as authorized by the Security Council. The Universal Declaration of Human Rights, International Covenant on Civil and Political Rights, and Genocide Convention would set standards for how governments treat their citizens and neighboring populations. All were intended to avoid the worst domestic and international abuses of the World War II era.

None of those high-minded aspirations prevented the new reign of terror perpetrated by the victorious Chinese Communist Party after China’s civil war, resulting in the deaths of an estimated 60 million Chinese. Nor did they stop the human outrages committed by the communist Khmer Rouge in Cambodia, the China-allied Slobodan Milosevic regime in Serbia, the Russian-supported Syrian murderer, Bashar al-Assad, or the China- and Russia-protected Kim dynasties in North Korea, which collectively killed millions more. All these humanitarian catastrophes, including Rwanda and Myanmar, repeatedly made a mockery of the world’s fervent promise of “never again” tolerating such atrocities.

To make matters worse, the humanitarian interventions that did occur during the post-Cold War era produced a decidedly mixed record. Arguably, the unhappy outcomes in Iran, Iraq and Libya were morally balanced by the Balkans rescue operations. Yet, the NATO military intervention in Kosovo was criticized by many as a violation of the U.N. charter because it lacked Security Council approval, blocked by China and Russia.

After wrestling for several years with the agonizing legal and moral quandaries presented by such situations, the full membership of the U.N. General Assembly bypassed the council and decided in 2005 that the international community no longer could tolerate particularly outrageous violations of human rights committed by governments against their own people. Moral paralysis must be overcome but, to be accepted by the nations of the world, humanitarian interventions needed to have the sanction of international law.

The U.N. adopted the doctrine of “the responsibility to protect” and said it “embodies a political commitment to end the worst forms of violence and persecution.” The General Assembly’s member states declared that, under the new international doctrine known colloquially as R2P, “We are prepared to take collective action, in a timely and decisive manner … including Chapter VII [authorizing the use of force] … should peaceful means be inadequate and national authorities manifestly fail to protect their populations from genocide, war crimes, ethnic cleansing and crimes against humanity.”

The world’s most flagrant contemporary case of a crime against humanity, shamefully matching the humanitarian outrages in North Korea, is China’s demonic mistreatment of the Muslim Uyghurs in Xinjiang Province. It is based on the operation of huge concentration camps where more than a million men, women and children have been incarcerated, tortured, beaten and relentlessly brainwashed to expunge the Islamic faith and Muslim culture. The U.S. government, under both the Trump and Biden administrations, has declared China guilty of genocide.

Amnesty International has described the situation as a “dystopian hellscape.” Human Rights Watch just released a 53-page report entitled, “‘Break Their Lineage, Break Their Roots’: China’s Crimes against Humanity Targeting Uyghurs and Other Turkic Muslims.” It states: “Coordinated international action is needed to sanction those responsible, advance accountability, and press the Chinese government to reverse course.” So far, all peaceful entreaties have proved entirely inadequate and the communist authorities have manifestly failed to protect their population as R2P requires.

Yet, recourse to the use of force against China, presumably led by the United States, is clearly out of the question under present circumstances. That does not mean, however, that the international community is powerless to do more than make moral appeals to the better angels of the Chinese communists. The public shaming of Beijing surely must continue and even be intensified and broadened.

For starters, China must be denied the financial and propaganda benefits of the upcoming Beijing Olympics, either by outright cancellation or by the “economic and diplomatic boycott” proposed by Sen. Mitt Romney (R-Utah). The International Olympic Committee and the world community need to recall the history of the 2008 Olympics that were awarded to China in return for its promise of unfettered access to the world press — a condition that was quickly and brazenly violated.

The world is even more deeply enmeshed in the economic allure of the huge Chinese market and cheap labor supply than it was a couple of decades earlier, so China’s economic leverage over others has increased immeasurably. Nevertheless, the world must either confront, or be permanently imprisoned by, the Hobson’s choice of its own making. It can continue on the present course, remonstrating fecklessly against China’s domestic and international depredations and, in effect, be parties to the destruction of the world order and the values it reflects, however imperfectly. Or, it can build a consensus that China is rapidly approaching, or already has achieved, pariah state status.

But, because of China’s economic, military and diplomatic power — facilitated by misguided Western policies — it will take wise, courageous and careful leadership to develop a non-kinetic resolution of the problem. It will not be easy to get there, but the end goal must be political reform in China. As Richard Nixon said a half-century ago, “China must change” or the world will face unprecedented danger. Instead, we followed policies that, year by year, incrementally increased the threat. Now the choices are much more difficult and painful. But continuing to avoid the reality of the nature of that regime will simply sink us deeper into the perilous morass as the prospects for a peaceful solution diminish.

Article VI of the Genocide Convention calls for a trial of those accused of genocide, either in a court where the crimes occurred or in an “international penal tribunal.” China certainly will not conduct such a proceeding, so the United States and others must muster the courage to begin arrangements for such a tribunal. The Genocide Convention and the Responsibility to Protect doctrine provide the least painful of the painful alternatives the Chinese government has placed before the international community.