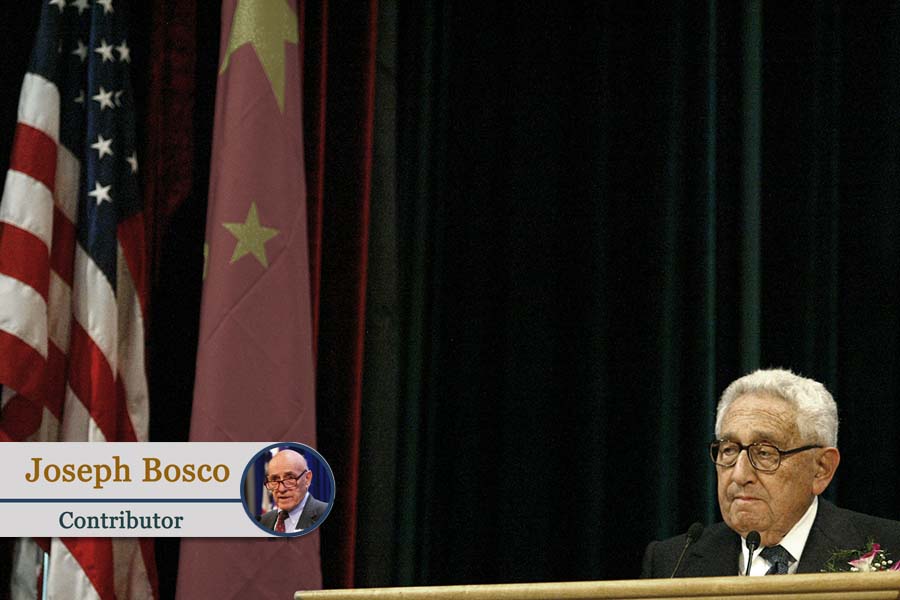 ◎ For Kissinger, there was never the right time or opportunity to promote change in China.

Former Secretary of State Henry Kissinger, 97, is still intellectually sharp enough to offer his insights on the security situation facing the world. Last week, in a virtual talk with the Economic Club of New York, he turned his attention to the increasingly dangerous confrontation between the United States and the People’s Republic of China. In his current view, if the two powers do not find a way to manage their rising tensions, “We will slide into a situation similar to World War I.”

But the legendary sage is more than a half-century late in recognizing the very real prospect of a violent turn in those relations — and still fails to acknowledge publicly the root cause of the problem: the inherently aggressive nature of China’s communist government.

By 1967, Kissinger had devoted none of his professional career or study to China, but Richard Nixon, who had spent a lifetime thinking and speaking about it, penned an article in Foreign Affairs that identified “Red China [as] Asia’s most immediate threat.” The future president, and soon-to-be China mentor to Kissinger, warned that conflict with China “will pose the greatest danger of a confrontation, which could escalate into World War III.”

Unlike Kissinger’s five decades of reticence and empathy toward China’s leaders, however, Nixon was not hesitant about identifying the source of the global peril: a communist regime that “nurtures its fantasies, cherishes its hates and threatens its neighbors.”

Having diagnosed the problem, Nixon went on to prescribe the solution, while warning that there was a right and wrong way to address the China challenge — in fact, there were several wrong ways. Preemptive war and its catastrophic consequences led the list. But Nixon also cautioned against over-eager accommodation with China: “[A]s many would simplistically have it, rushing to grant recognition to Peking, to admit it to the United Nations and to ply it with offers of trade — all of which would serve to confirm its rulers in their present course.”

But, once he became president, with Kissinger ensconced at his side as national security adviser, Nixon’s hardheaded cautions somehow disappeared into the ether. Convinced that “playing the China card” would give the United States leverage in achieving detente with the Soviet Union, a favorite Kissinger project, and a face-saving withdrawal from Vietnam — neither of which actually materialized to America’s advantage — the realist Nixon and uber-realist Kissinger made a series of preemptive concessions to Beijing, particularly on Taiwan.

As the years passed without changes in China’s behavior — toward its own people, its regional neighbors, or to the West generally — Nixon began to have serious second thoughts about the historic deal he had struck with China. In his Watergate-forced retirement, he told his former speechwriter: “We may have created a Frankenstein” (mistaking the monster for its creator).

Nixon initially advocated a “dynamic detoxification … to help draw off the poison from the Thoughts of Mao” as the way to achieve a peaceful modus vivendi with China. But, he later noted that Leonid Brezhnev, general secretary of the Soviet Union’s Communist Party, who would know about such things, had a different view. He once told Nixon that “Chinese policies would not change, even after Mao’s death; he was certain that the entire Chinese leadership was instinctively aggressive.”

The Tiananmen Square massacre in June 1989, under the great reformer Deng Xiaoping, provided a bloody demonstration of that truth. After a controversial post-Tiananmen trip to Beijing, Nixon told a Senate Committee that U.S.-China relations “are at the lowest point in my lifetime.”

Kissinger, by contrast, took the Tiananmen slaughter in stride. Deng, he asserted, had simply acted as any world leader would when confronted with such a massive public gathering. Never mind that the students and workers were peaceful, even festive.

When Kissinger was asked in a Wilson Center retrospective of his career whether he was disappointed that his work with Nixon had not produced any progress toward political reform in China, he responded: “We cannot solve all the problems of the world and the domestic structure of all the countries in the world. As a national effort, we must have objectives in that direction, and we must promote it where we can.”

But, it seemed for Kissinger there was never the right time or opportunity to promote change in China — which had been the entire purpose of Nixon’s project until the president linked up with the professor. But, whereas Nixon, out of office, seemed inclined to return to his original thinking about “Red China’s” danger to the world, Kissinger remained insouciant, because political reform in China never had been on his geopolitical agenda.

Their philosophical paths diverged even on Taiwan, which they both were willing to abandon in 1972. Taiwan’s democratization greatly impressed Nixon, who said in 1994 that China and Taiwan “are permanently separated politically.” No so Kissinger; he warned Taiwan in 2011 to move forward in submitting to Chinese communist rule because “China will not wait forever.”

In April, Kissinger wrote a Wall Street Journal article entitled, “The Coronavirus Pandemic Will Forever Alter the World Order.” It included no reference to China. Kissinger avoided any responsibility for blame-fixing with the assertion: “To argue now about the past only makes it harder to do what has to be done.”

Yet, he is prepared to invoke the conditions that led to World War I as a model to be avoided if China and the United States are not to repeat those mistakes. Too bad he didn’t notice what was happening with China over the past 50 years under the engagement policies he nurtured through eight U.S. administrations and five Chinese communist dictators.