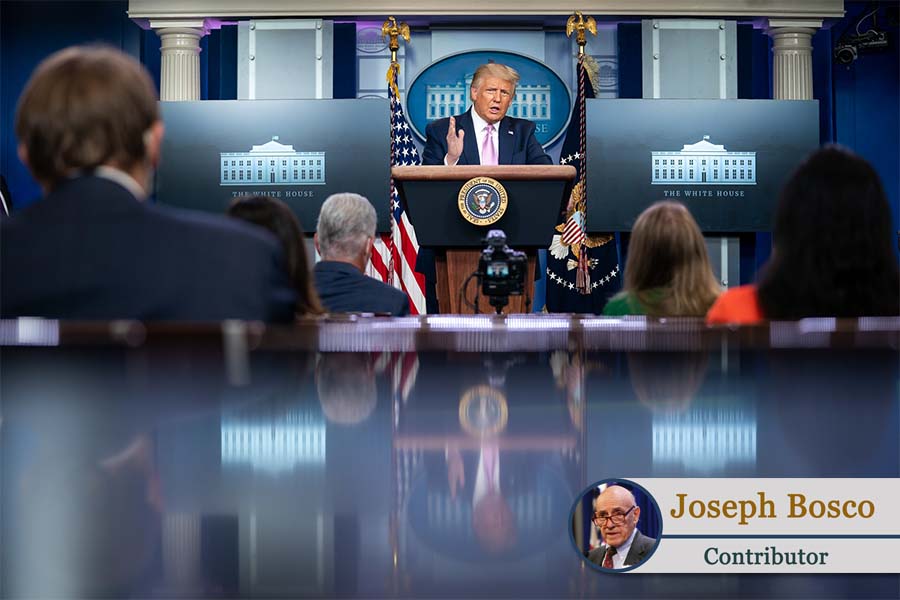 The charges start with the president’s attacks on members of the North Atlantic Treaty Organization (NATO) for failing to meet their agreed contributions to the common defense.

Yet, after the controversy erupted, Secretary General Jens Stoltenberg praised the U.S. president: “Let me thank you for the leadership you show on the issue of defense spending. … It is really having an impact because … allies are now spending more on defense.”

The military threat that NATO budgets are intended to repel, of course, is aggression from Russia. The president also has opposed member policies that strengthen Russia, including Germany’s support for Russia’s undersea gas pipeline. Chancellor Angela Merkel is now reconsidering.

Merkel and other Europeans also see the danger emerging from the Indo-Pacific, adopting the Trump administration’s term for the region.

The pandemic has opened European eyes to the nature of the Chinese Communist regime. An EU study last year labeled China a “systemic rival.”  On both interests and values, Europeans now challenge China in the same terms the Trump administration uses, providing the basis for a  strong trans-Atlantic response.

That censure will be dramatically refuted this week when Israel and the United Arab Emirates (UAE) formalize mutual relations, the first breakthrough since Jordan recognized Israel in 1994.  The Trump team achieved the historic event through years of quiet negotiations. Last week, Bahrain prepared to become the fourth Arab state to normalize relations with Israel, further breaking the Mideast logjam that has stymied U.S. administrations for decades.

Earlier, Trump’s team skillfully invigorated the complex coalition, including Sunni Gulf states and Israelis, in the regional alliance against Iran and ISIS. (A Norwegian legislator has nominated Trump for the Nobel Peace Prize, an honor more richly deserved than some earlier awards.)

Trump’s demand that South Korea boost its share of defense costs is blamed for alienating a loyal security ally. But the fivefold jump is under negotiation and the parties may settle on a more modest increase.

Yet, the real issues in the relationship go beyond respective financial burdens. The administration of Moon Jae-in is clearly more conciliatory toward both Pyongyang and its Chinese Communist ally than Washington deems prudent — a  problem that helped precipitate Trump’s harsh demand.

The Trump administration has greatly intensified America’s pushback against China’s expansionism in the South China Sea. In both the quantity and quality of Freedom of Navigation Operations (FONOPS), it has discarded the Obama approach of limiting transits to “innocent passage,” which implicitly conceded China’s territorial claims.

The Trump team’s maritime leadership and encouragement of allies to join the effort are paying off; the United Kingdom, France and Australia have undertaken their own FONOPS in the South China Sea.

China’s aggressive economic and diplomatic behavior, and its grossly irresponsible and opportunistic handling of the coronavirus pandemic that originated in Wuhan, have helped garner international support for Trump’s confrontational response.

In his Nixon Library speech last month, Secretary of State Mike Pompeo articulated the need for global cooperation against China: “I call on every leader of every nation to … insist on reciprocity, transparency and accountability from the Chinese Communist Party. … Maybe it’s time for a new grouping of like-minded nations, a new alliance of democracies.”

In an international security conference last week, an Indian scholar echoed the idea: “We need an Indo-Pacific Charter like the Atlantic Charter.”

Several Asian and European countries have directly supported America’s confrontation of China (United Kingdom, France, Vietnam) or have grouped with other like-minded partners (India, Japan, Australia) or acted independently in the same direction (the Czech Republic, Germany, Indonesia). The South Pacific island of Palau has invited Washington to establish an active military presence on its territory.

Vietnam, chair of the Association of Southeast Asian Nations (ASEAN), said its members are “open to cooperation with the U.S. We welcome a constructive U.S contribution in the South China Sea.”

In 2010, China successfully bullied the ASEAN, declaring: “China is a big country and other countries are small, and that’s just a fact.” In the Trump era, a mayor in a small country such as the Czech Republic defied China’s threats over a visit to Taiwan. Germany’s foreign minister confronted his visiting Chinese counterpart and sided with the Czechs. He also said, “We want to help shape the order in the Indo-Pacific region with countries that share our democratic and liberal values.”

The geopolitical returns from around the world demonstrate growing understanding that “America first” does not mean America alone. The Trump administration’s leadership by example has laid the groundwork for a multi-regional, even global, coalition of like-minded nations determined to stop China’s expansionist and exploitative behavior.

Trump critics are right that, since his three major speeches on North Korea’s atrocious human rights record and his meetings with North Korean defectors, he has not personally spoken out forcefully on human rights. But, once again, it is important to look at the president’s actions and those of the people he has appointed and enabled.

Over Beijing’s vehement objections, Trump has signed every piece of human rights legislation sent to his desk: on the Uighurs, Tibet, Hong Kong, and enhancements to Taiwan’s democratic status. Using executive orders, he has imposed economic sanctions on scores of China’s human rights violators.

Further, he has given unfettered authority to Secretary Pompeo and his colleagues to launch a broad information offensive against China’s human rights abuses. Pompeo has gone so far as to challenge the political legitimacy of the Chinese Communist Party, and called for a joint effort by the Chinese people and the international community to change the regime’s behavior.

In American politics, demonizing an opponent is fair game, and sometimes deserved. But the devil — to many, that would be Donald Trump — should be given his due when it comes to judging the effectiveness of his foreign policy and national security team, and the policies he has directed or enabled.

What was said about Wagner’s music also applies to the Trump foreign policy record: It is better than it sounds.