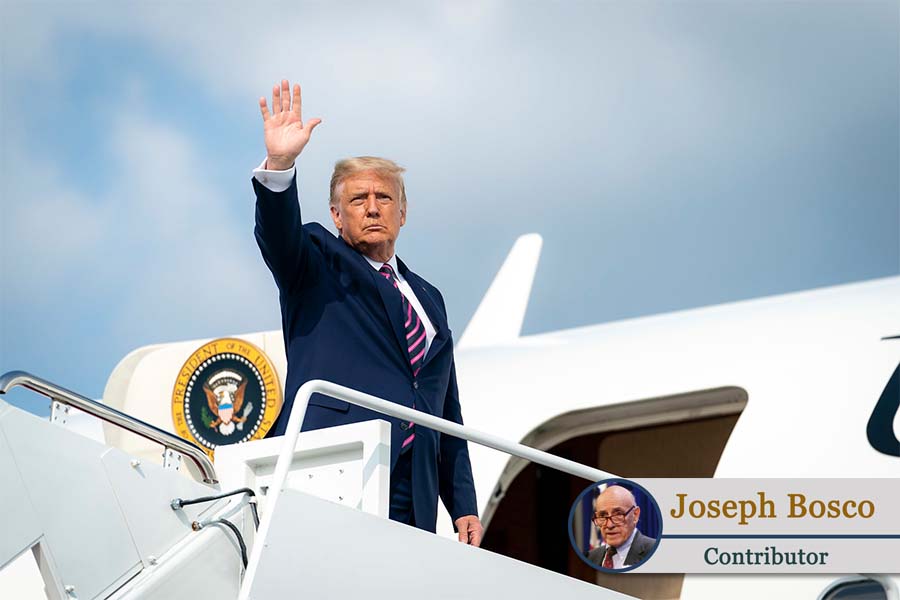 ◎ China is conducting its most serious military escalation against Taiwan since it fired missiles across the Taiwan Strait in 1996.

China is conducting its most serious military escalation against Taiwan since it fired missiles across the Taiwan Strait in 1996 to protest the country’s first direct presidential election. Over the weekend, China flew 18 People’s Liberation Army aircraft, both bombers and fighters, provocatively violating Taiwanese airspace. Does China perceive that the window of opportunity to get away with an attack on Taiwan is closing or opening? It’s not yet clear whether Beijing views the costs and risks of aggressive action are increasing or decreasing.

Its upscaling of preparations for an assault could mean either that (a) it believes time is running out and it must act sooner rather than later, or (b) it has greater latitude to move any time it chooses and should continue its preparatory planning while desensitizing Taiwan and the United States to the increased frequency of mere “training” exercises.

China has expanded its military forays around Taiwan since Tsai Ing-wen’s reelection as president in January, and as the Trump administration broadens its efforts to enhance Taiwan’s relations with the United States and the international community.  Under a second Trump administration, America’s economic, diplomatic and security relationship with Taiwan only promises to deepen.

The U.S. presidential campaign presents Beijing with both opportunity and danger. It may believe that President Trump is so preoccupied with fighting off the challenge from former Vice President Joe Biden that he would be unable to respond coherently to a sudden move against Taiwan. It also may minimize the risk of a strong U.S. response because of Trump’s frequent touting that he has kept the United States out of another “endless foreign war” — though a U.S.-China conflict is unlikely to be protracted.

Trump’s political task has been made exponentially more daunting by the ongoing economic crisis generated by the coronavirus pandemic. Conveniently for China, the virus that originated in Wuhan spread at a time when Trump’s trade pressures were succeeding in extracting significant economic concessions that, if continued, would have forced regime-threatening political reform in China.

Beijing clearly would welcome a change of leadership in Washington instead. But attacking Taiwan before Nov. 3 might reveal an unpleasant surprise for China. Rather than being paralyzed by hesitation, Trump may be quite prepared to react swiftly and decisively, especially given his resentment at China’s handling of the virus outbreak and Xi Jinping’s deceitful representations.

The president recently suggested as much, saying that his trusting feelings toward Xi had changed and that his administration has forewarned Beijing of his retaliatory intentions. He said, ominously, “China knows what I’m gonna do. China knows.” The open question is whether Xi and his colleagues are deterred by a commitment not made publicly and not subject to condemnation if unfulfilled, as was President Barack Obama’s evanescent “red line” over Syria’s use of chemical weapons.

This time, however, a firm, forceful response by Trump would be strongly supported by an American public equally resentful over the impact of the virus on their lives and favorably disposed toward the people of Taiwan.

The rallying of public opinion behind the president would boost his prospects for reelection, precisely the opposite result that Beijing desires.

Under that analysis, China is unlikely to make a move before Nov. 3 and instead will first await the election results. If the vote is close, with a disputably narrow margin for either Trump or Biden, great civil discord in America is likely. With an escalation of domestic protests and disorder, Beijing may decide that would be the time to act while the administration and the nation are distracted and divided.

But, again, a president under siege domestically might well seize upon an external challenge to mobilize public support behind his domestic position. His political opponents almost certainly would accuse him of a “wag the dog” tactic and it could well exacerbate bitter internal divisions — an outcome that would please not only China but Russia, Iran, North Korea and other regimes that do not wish this country well. Beijing would have to decide whether the perceived benefits of a quasi-civil war in America would outweigh the incalculable costs to China of outright conflict with an aroused United States.

If either candidate were to win the election with a clear and definitive margin, most of the country would accept the result and civil unrest would be muted. If the winner is Biden, China would have no incentive to move against Taiwan before he takes office in January. With the disruptive Trump out of the way, Beijing would expect a gradual reversion of American policy back to the softer, less confrontational 24 years of the Clinton-Bush-Obama period, and the prospect that it could win without the need for fighting — on Taiwan, the South China Sea, trade, and other contentious issues.

If Trump wins convincingly, Beijing would be back to its assertiveness dilemma — whether to move aggressively now, before Taiwan and the United States further build their defensive posture, or to hope the triumphant reelected president would feel vindicated rather than vindictive toward the Chinese Communist regime that has done so much to undermine him and the country he governs.