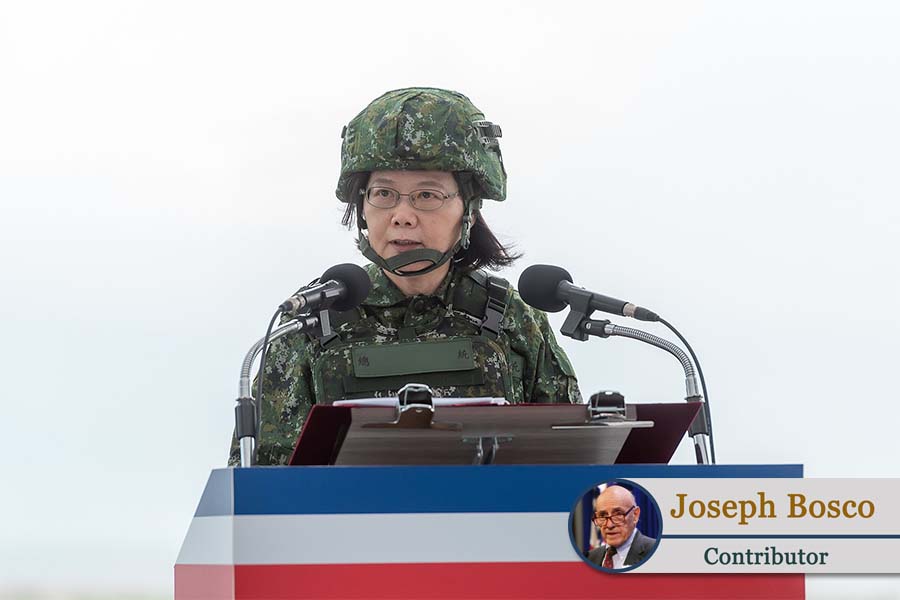 ◎ China’s increasingly aggressive behavior is motivating America’s allies, friends and security partners to cast a wary eye toward China and grasp the revived advantages of collective security led by the United States.

Recognizing that what is at stake is not only Taiwan’s own political independence and security, but a major front in China’s existential challenge to the rules-based, Western values-oriented international order, Tsai pledged that Taiwan will carry its share of the democratic burden.

She noted the increases in Taiwan’s military budget, including purchases of defensive weapons from the United States, as a reflection of the reality that “strength can be correlated with deterrence.”

The acquisition of weapons systems and military hardware not only enhances material defensive capabilities but also conveys will, the overarching psychological component of all political struggles. China focuses intensively on that aspect of confrontation, drawing both on Sun Tzu’s teachings in the art of war and on more than a century of communist doctrine and practice starting with Vladimir Lenin. It hopes to coerce Taiwan into submission and to intimidate  Washington into letting it happen. (Non-communist totalitarians such as Hitler have used the same techniques.)

Unfortunately, some voices in Taiwan and the United States have cast doubt on Taiwan’s resolve to stand up to a Chinese attack, no matter how many American weapons systems it buys.  Several years ago at a Washington conference on Asian security, a military officer from Taiwan reacted to American critics of Taiwan’s level of defense spending.

Taiwan could never hope to match China’s overwhelming and growing advantage in military capability, he argued, and without assurance of timely American intervention, it would be futile to resist a Chinese attack. And, he pointedly noted, no such U.S. commitment to directly defend Taiwan currently stands.

President George W. Bush’s statement in April 2001 that Washington would do “whatever it took” to defend Taiwan was quickly extinguished by the foreign policy establishment and never repeated. Instead, both Taipei and Beijing are left with Washington’s “strategic ambiguity” as most succinctly articulated in the Clinton administration: We might or might not come to Taiwan’s defense, “depending on the circumstances.”

That middling posture — half deterrence, half defeatism — was reflected in Clinton’s on-again, off-again deployment of U.S. aircraft carriers to the region when China fired missiles toward Taiwan to protest the country’s first direct presidential election. The ships headed for the Taiwan Strait but turned away when Beijing threatened a “sea of fire.” A traumatized Clinton official later described the episode as “our own Cuban missile crisis — we had stared into the abyss.”   Clinton explained in his memoir that the United States was not committed to directly defend Taiwan under the Taiwan Relations Act (TRA), only to provide it with defensive weapons.

However, the TRA also states Congress’s intention “to maintain the capacity of the United States to resist any resort to force or other forms of coercion that would jeopardize the security, or the social or economic system, of the people of Taiwan.”

In light of Beijing’s escalation of both rhetoric and military activities directed at Taiwan, Congress is now urging this administration and whichever one takes office in January to demonstrate that the United States does possess the capacity to defend Taiwan, so there will be no last-minute scrambling as there was after North Korea’s sudden invasion of South Korea.

Republican and Democratic members of the House and Senate have introduced the Taiwan Invasion Prevention Act to eliminate any doubt that the United States has both the ability and the resolve to defend Taiwan. President Trump and former vice president Joe Biden — separately or jointly — should declare their support for the bipartisan legislation.

The debate on the bill should serve as a congressional authorization to use military force.  Otherwise, as Ma warned, once a Chinese attack starts, there is no time to debate pros and cons of resistance: “Taiwan would have no chance to wait for the U.S. military to assist.”  U.S. strategic clarity could help alleviate his trepidation, which some in Taiwan have called defeatism that weakens Taiwan morale and tempts China — the opposite of Tsai’s peace-through-strength message.

But there are Americans who prefer continuing ambiguity, asserting that it has managed to preserve the status quo. Except that it hasn’t. While there has been no cross-Strait war yet, China is advancing inexorably in that direction. Beijing doesn’t just want Taiwan to stop moving away from China; it wants it to move affirmatively toward it. That’s why its 2005 Anti-Secession Law threatens war if Taiwan takes too long to accept “peaceful” unification — and why Henry Kissinger warns Taiwan, “China will not wait forever.”

Ambiguity advocates also offer contradictory rationales for keeping it. On one hand, they warn that a clear U.S. commitment to Taiwan would increase the likelihood China would attack it — as if Beijing is perversely looking for an opportunity to get into a war with America. On the other hand, they say our allies would not support us and we would not undertake the mission alone, so China would see it as an Obama-like “red line” it could cross without risk.

In fact, China’s increasingly aggressive behavior is motivating America’s allies, friends and security partners to cast a wary eye toward China and grasp the revived advantages of collective security led by the United States.

Finally, opponents of strategic clarity argue that Taiwan matters more to China than it does to the United States, so we can’t risk World War III over it. But Chinese graduate students and scholars confide to Americans that they do not believe Taiwan is worth a war, let alone one with the U.S.  The task of American leaders is to convince Chinese civilian and military hardliners that the costs and risks of conflict with the U.S. would be catastrophic for China, destroying all they have spent 70 years building up.

Meanwhile, aside from the intrinsic worth of 23 million democratic Taiwanese, Americans need to be reminded that there are larger geostrategic stakes at stake. On Dec. 7, 1941, when Japanese planes bombed Pearl Harbor from aircraft carriers in the Pacific, the attack on the Philippines was launched from the unsinkable aircraft carrier, Formosa. U.S. regional credibility and global security are very much linked to Taiwan’s fate.