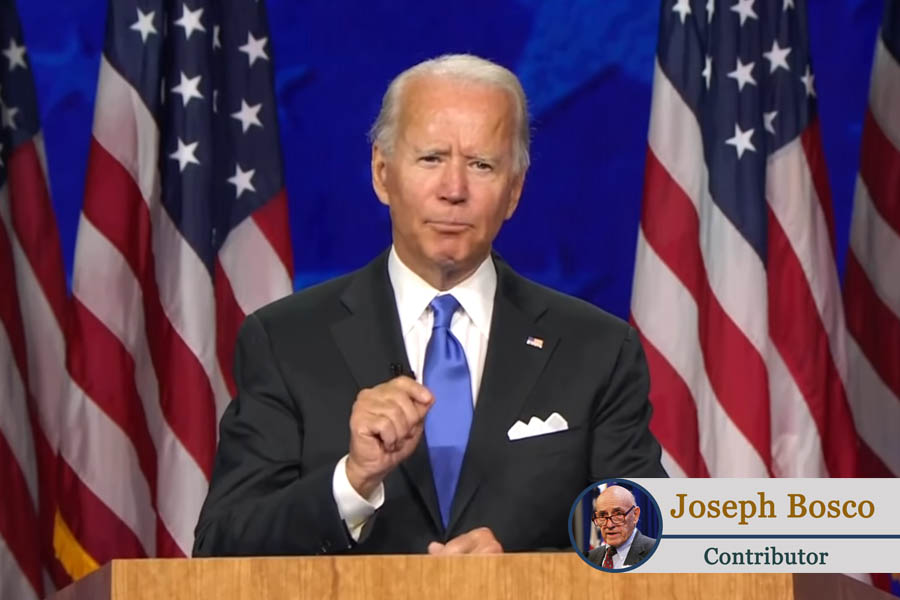 ◎ The fact that Biden’s position on Communist China and Taiwan remains a matter of conjecture at this point in his 50-year government career is concerning.

With the 2020 Democratic Convention in the books, editorialists and foreign policy experts are speculating on where the party’s standard-bearer, Joe Biden, stands on the most critical and pressing national security issue of our time — America’s relationship with Communist China — and on Taiwan, the most dangerous flashpoint in U.S.-China relations.

The fact that Biden’s position remains a matter of conjecture at this point in his 50-year government career, including as a member of the Senate Foreign Relations Committee and as vice president, is concerning. He has made a number of inconsistent, sometimes incoherent, statements about China. President Trump is guilty as well of uttering or tweeting confusing or erroneous things on these subjects, either publicly or as reported by former aides.

But Trump also heads an administration whose actions and words have defined a pretty clear policy of active resistance to China’s worst depredations: on trade, economic and intellectual property issues; on maritime and airspace aggression, seizure of national resources, and environmental destruction in the South and East China Seas; on Hong Kong, where the people’s limited democratic rights are being extinguished; on the destruction of the human rights of Uighurs, Tibetans, Falun Gong, Christians and dissidents; and on the expanding Chinese threat to Taiwan.

Yet, Biden mentioned none of those security, environmental and human rights matters in his speech accepting his party’s nomination. Nor did he talk about the effects of China’s malign behavior closer to home: its extensive efforts to infiltrate and subvert major American educational, scientific and governmental institutions and telecommunications systems, and to interfere in the U.S. election (which  China wants Biden to win, according to U.S. intelligence).  The only Chinese threat he found worthy of a passing reference was that we must “never again be at the mercy of China” for the supply of medical equipment. You wouldn’t know from his speech that the Obama-Biden intelligence director called China “America’s greatest mortal threat.”

In 2001, Biden criticized President George W. Bush for saying, briefly, that the U.S. would do “whatever it took” to assist Taiwan if it were attacked by China. Even though the offhand remark was retracted within hours, Biden felt compelled weeks later to set Bush straight in a Washington Post opinion piece. He lectured that it was better to preserve “strategic ambiguity under which we reserved the right to use force to defend Taiwan but kept mum about the circumstances in which we might, or might not, intervene in a war across the Taiwan Strait.”

The policy was first articulated by the Clinton administration in 1996 when China was lobbing missiles toward Taiwan to protest its first direct presidential election. The problem with the Clinton-Biden approach is that it virtually invited Beijing to create the “circumstances” that would deter U.S. intervention. Ever since, China has been following an area-denial/anti-access strategy, building an arsenal of anti-ship missiles and attack submarines, while periodically threatening to sink U.S. ships and kill thousands of American sailors and airmen. At the same time, it has escalated its aggressive movements of naval forces and aircraft in the Taiwan Strait.

As Biden noted, Section 3C of the Taiwan Relations Act (TRA) directs the president “to inform the Congress promptly of any threat to the security or the social or economic system of the people on Taiwan and any danger to the interests of the United States arising therefrom.” It does not say the president must wait to consult Congress until a Chinese attack actually occurs or is imminent — only that the threat to Taiwan’s democratic security and the danger to U.S. interests be identified. They are hardly disguised, having been asserted by Beijing repeatedly, even enshrined in China’s 2005 Anti-Secession Law.

Even without the TRA, should an actual Chinese attack on Taiwan occur, the president would be well within his constitutional powers as commander in chief to respond militarily and then consult with Congress regarding further action. Yet, Biden apparently believes the TRA constricted the president’s inherent powers when applied to Taiwan as a U.S. national security concern. In the event of a sudden attack by China on Taiwan, consultation with Congress prior to responding would cause disastrous delay, allowing China to overrun Taiwan.  So much for Taiwan’s democracy and for America’s strategic interests under that scenario.

But the Biden consultation trap need not paralyze America’s ability to save its democratic security partner from being swallowed by China. Since the TRA’s preconditions of “threat” and “danger” have been met, the president is free to seek congressional authorization now for a possible future use of military force to defend Taiwan. He can hold that security chit in reserve to exercise immediately, if and when needed — and let China know he’s prepared to do so.

As it happens, there is pending in Congress a legislative instrument that could accomplish that purpose without the president having to ask. The Taiwan Invasion Prevention Act (TIPA) establishes a limited defensive authorization for the president to use military force for the specific purpose of securing and protecting Taiwan against armed attack. That legislative action complies in advance with the TRA and avoids the fatally costly step of further congressional consultation after an attack actually occurs.

President Trump and former Vice President Biden, jointly or separately, should support the legislation and state their intentions, whoever is elected, to exercise the authorization to defend Taiwan. It would go a long way toward deterring a Chinese attack by preventing the strategic miscalculation that triggered the Korean War in 1950. As Henry Kissinger has written: “We didn’t expect the invasion; China didn’t expect our response.” This time, Beijing would know the dire consequences of its aggression.

Yet, in his article, Biden was worried about Taiwan, as much as China, getting the U.S. into a conflict: “The president should not cede to Taiwan, much less to China, the ability automatically to draw us into a war across the Taiwan Strait.”

But Taiwan wants to avoid a war on its soil even more than America does. For that matter, China does not want war, either — it just wants to threaten it so that Taiwan and the U.S. will surrender the democracy and independence of 24 million free Taiwanese. America’s political leaders must make clear to Beijing that we will do “whatever it takes” to prevent that from happening, and stop tempting it with the ambiguity that only invites strategic miscalculation and calamity.