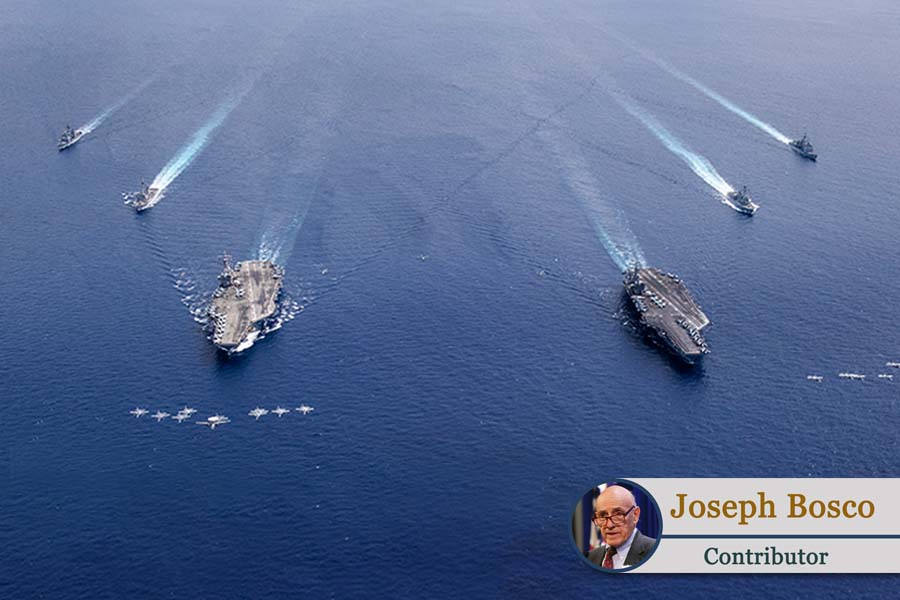 ◎ The Nimitz and Ronald Reagan strike groups are on station in the South China Sea carrying out Freedom of Navigation Operations.

The U.S. Navy’s aircraft carrier battle groups are the most dramatic symbol of American military and geopolitical power. They were critical to winning World War II in the Pacific and they have since been deployed in the Indo-Pacific to communicate U.S. resolve against potential adversaries.

The presence or absence of the Seventh Fleet — the configuration of Navy ships and aircraft in the Indo-Pacific built around the carriers — generally determines whether war or peace prevails in the region. In the immediate post-war period, Washington’s strategic planners in the Truman administration shockingly determined that America’s Pacific security perimeter could exclude Taiwan and South Korea.

Washington’s civilian and military leaders then — Secretary of State Dean Acheson and Gen. Douglas MacArthur — conveyed that lack of strategic concern by pointing out lines on a map and backing up the perverse decision by withdrawing the Navy from the Taiwan Strait and the immediate environs. The communist dictators in Moscow, Beijing and Pyongyang welcomed what they saw as a green light for aggression, and the Korean War was on.

President Harry Truman, rueing his administration’s grievous mistake, announced, “[T]he occupation of Formosa by Communist forces would be a direct threat to the security of the Pacific area and to United States forces performing their lawful and necessary functions in that area. Accordingly, I have ordered the 7th Fleet to prevent any attack on Formosa. As a corollary of this action, I am calling upon the Chinese Government on Formosa to cease all air and sea operations against the mainland. The 7th Fleet will see that this is done.”

Henry Kissinger wrote of the reciprocal strategic miscalculations that precipitated the war: “We didn’t expect the invasion; China did not expect our reply.”

After the “Korean Conflict” ended with an armistice, President Dwight Eisenhower dispelled further confusion over America’s security commitment to both South Korea and Taiwan. In 1954, his administration executed identical Mutual Defense Treaties with the Republic of Korea and the Republic of China. The Navy carriers and their supporting complements were, again, the designated enforcers.

Almost two decades later, President Richard Nixon, who had been Eisenhower’s vice president, decided to shake things up. The lifelong anti-communist would open relations with a hostile “Red China” because “[w]e simply cannot afford to leave China forever outside the family of nations, there to nurture its fantasies, cherish its hates and threaten its neighbors. … China must change.”

Nixon and his national security adviser, Kissinger, decided that preemptive concessions were the way to win Mao Zedong’s trust. Since Mao understood the strategic significance of the Seventh Fleet and those carrier strike groups, he demanded their removal from the Taiwan Strait before talks could begin. Nixon complied, setting the stage for his historic trip.

The carriers stayed out of the Strait for 23 years. In 1995, China showed its displeasure at then-President Lee Teng-hui’s reunion visit to Cornell by firing missiles toward Taiwan. President Bill Clinton dispatched the USS Nimitz through the Taiwan Strait. Beijing protested the incursion into “Chinese waters” and the Clinton administration  “explained” the transit as a “weather diversion.”

Months later, as Taiwan’s first direct presidential election approached, China again fired missiles across the Strait. Clinton sent two carriers this time, the Nimitz and the Independence. Beijing said they would face “a sea of fire” if they entered the Strait. They stayed out.

The carriers avoided the Strait for another dozen years, as did all other Navy ships. In 2005, President George W. Bush’s defense secretary, Donald Rumsfeld, learned of the self-imposed Strait aversion and directed the Navy to resume normal operational transits.

But it was not until two years later that a carrier battle group made the passage, after Beijing abruptly cancelled a Thanksgiving port visit to Hong Kong by the Kitty Hawk. The rejected ships turned around and returned to home port in Yokosuka, Japan, by passing through the Strait.

Beijing voiced its predictable protest. Initially, the Navy again cited weather as the operational reason for the transit, but Beijing was not satisfied with the explanation. Adm. Timothy Keating, head of the U.S. Pacific Command, then gave a less ambiguous response: “We don’t need China’s permission to go through the Taiwan Strait. We will exercise our free right of passage whenever we need to — correct that — whenever we choose to.”

The White House spokesperson, however, took a more conciliatory tone: “[T]he president believes we have good relations with China. We work cooperatively with China on so many different issues. This is one small incident. And in the big picture, in the big scheme of things, we have very good relations.”

For the rest of the Bush administration, then through eight Obama years, and so far during the Trump term, the Navy apparently has felt neither the need nor the desire to send a carrier strike group through the Strait — though single ships have been transiting at an increasing pace under President Trump.

Reports suggest the administration has contemplated sending the carriers but has been reluctant to “provoke” Beijing while the trade deal remains unconsummated. During that same period, China has been less inhibited about asserting its growing naval power, twice sailing its own newly-minted carrier, Liaoning, through the Strait, and its planes frequently have violated Taiwan’s airspace. In the past seven years, China has made more carrier Strait transits than the U.S. has in half a century.

While the Navy reinforces the principle of free navigation, and the U.S. commitment to Taiwan, every time an individual cruiser or destroyer traverses the Strait, nothing will reinforce that dual message more than the transit of a carrier strike force or two. China measures the depth of an adversary’s resolve in millimeters, and may question Washington’s will to confront it in a potential conflict situation when it is manifestly reluctant to make a perfectly legal passage in peacetime.

As it happens, the Nimitz and Ronald Reagan strike groups are on station in the South China Sea carrying out Freedom of Navigation Operations. They also support Secretary of State Mike Pompeo’s recent warning to China that its illegal claims and aggressive actions in that sea no longer will be accepted by the United States and the international community. But only two U.S. carrier passages in 48 years could help explain why China believes it can succeed with its aggression against Taiwan.

The Nimitz would be an appropriate candidate to complete the deterrent mission a spooked Clinton administration aborted in 1996. (One former official called the incident “our own Cuban missile crisis; we had stared into the abyss.”) And a warship carrying the name of Ronald Reagan has special meaning in the new cold war against a hostile communist power.