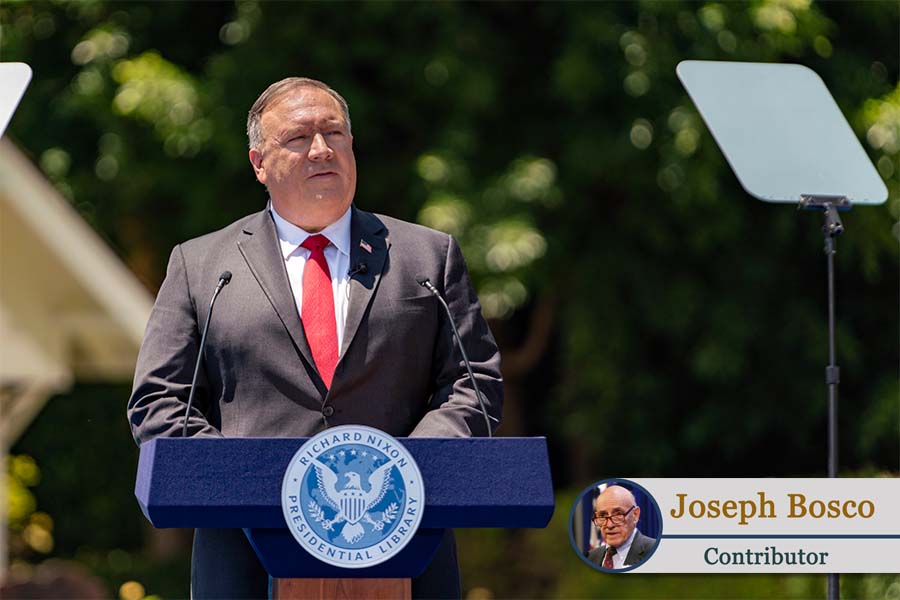 ◎ Pompeo called on free nations to join the United States—and the Chinese people—in changing the behavior of the ruling communist regime.

In his recent speech at the Richard Nixon Presidential Library and Museum, Secretary of State Mike Pompeo effectively declared a new cold war with Communist China, which has been waging one against the West unchallenged for decades.

Pompeo called on free nations to join the United States— and the Chinese people — in changing the behavior of the ruling communist regime, or, failing that, in changing the regime itself.

His language invoked the original Cold War struggle against communist tyranny in the Soviet Union and Eastern Europe. A similar campaign of internal and external pressure against China would be more complex and daunting now, because of the entwining of investments, trade and technology flow.

Beijing has learned to apply the old “Godfather” maxim: Keep your friends close and your enemies closer. China doesn’t really have friends, just business partners, supplicants and victimized debtors. But it has plenty of enemies, and thanks to its communist ideology, the United States and the West are at the top of the list. Yet, intricate economic relationships, cemented over decades of misguided engagement policies, have made China, for some, too close to punish.

At least that is what Beijing has been counting on, successfully so far, and it is what the Trump administration has committed to halt. But, as Pompeo acknowledged, getting allies to go along with this economic distancing strategy won’t be easy. He obliquely chastised Germany for its self-defeating “timidity” in challenging China for fear of losing access to its huge markets.

Hong Kong is the first test of the administration’s bold new China policy and, if it fails, it could be the last attempt for a long time. Like Germany, the United States is reluctant to use all the legal, diplomatic and economic instruments at its disposal and, for the same reason, the reciprocal economic costs it will impose on us.

So far, China is winning its gamble that Washington and its allies lack the nerve to deploy the powerful weapons in their hands and undermine Hong Kong’s special status as a global financial center. Western threats to cut off Hong Kong’s two-way street to profit always seemed a bit hollow to Beijing. Now, with its Kafka-like National Security Law, it has called the West’s bluff and is confident that is all it was.

Regarding the overall China threat, Pompeo made it clear that (a) the United States expects the Chinese people to undertake the long and dangerous struggle to rid themselves and the world of the odious Chinese Communist Party, and (b) the international community has both a moral and self-interested obligation to support them in that effort, just as it helped the oppressed peoples under Soviet communism liberate themselves.

Hong Kong neatly fills the bill as the first candidate to challenge China’s communist system, because the people have been doing it for years — every time Beijing tightened its grip on the territory’s semi-autonomy and violated the binding legal promise of “one country, two systems.”

Hong Kong is also the “easiest” venue in which the liberation project could launch. The mainland population, subject to China’s propaganda machine for generations, is starved for the truth that’s necessary to help it find its moral and political moorings. That can only come from the mind-opening influence of a Western information campaign.

But Hong Kongers, thanks to the mixed legacy of British colonial rule, already know the blessings of democracy and know they do not want to surrender them. Generations of its young people have expended their blood, sweat and tears to demonstrate their commitment to political freedom. Waving American flags, they plead for Western help — not through military intervention but with the diplomatic and economic tools readily available. They know they will pay a price if the West deploys stringent measures against their homeland, but they are willing to accept it for the sake of their freedom and that of future generations. They have made clear they will sacrifice livelihood to achieve liberty, and they grasp Pompeo’s message that it will be “the furthest from easy.”

Yet, Western institutions still maneuver to preserve their financial advantages in Hong Kong.  The main players are the banks — the very entities now targeted for sanctions by Congress for funding Beijing’s crackdown and enabling China’s spreading dictatorial rule over Hong Kong.

Will Hong Kong be another Berlin, where the West saved a brave but besieged democratic city from communist aggression? Or another Budapest, where we encouraged its residents to resist for their own freedom and in the larger geopolitical cause — and then abandoned them to their tragic fate?

Hong Kong’s plight implicates the larger question of American and Western credibility because China’s appetite for territorial control and political power extends far beyond that city.

Days before his landmark Nixon Center speech, Pompeo delivered another precedent-shattering address that gave reassurance, hope and resolve to small, relatively weak Southeast Asian countries that live in fear of China’s bullying in the South China Sea. He ended decades of Washington’s reluctance to state unequivocally that it rejected China’s overreaching maritime claims as utterly meritless and unenforceable. But Beijing’s mounting aggressiveness, under cover of the coronavirus pandemic’s distractions, could well end in a military clash that would test American resolve to meet force with force.

For Taiwan, the most volatile of the China-U.S. flashpoints, a Chinese seizure of one of its islands could be deemed below the threshold for a possible U.S. response, and as a salami slicing tactic, provide a launching platform for more robust military action later.

Washington refuses to say it will defend Taiwan or any of the Southeast Asian countries — even our Philippines ally — against Chinese aggression. Only that “it will depend on the circumstances.” That strategic ambiguity, if coupled with a failure to use all available non-kinetic measures to support the people of Hong Kong, would demoralize those looking to America for leadership in the existential geostrategic challenge of our time.

It will tempt, not deter, Communist China and it will undercut Pompeo’s declaration: “The free world must triumph over this new tyranny.” To do so, the West must make Hong Kong the Berlin, not the Budapest, of the 21st century.