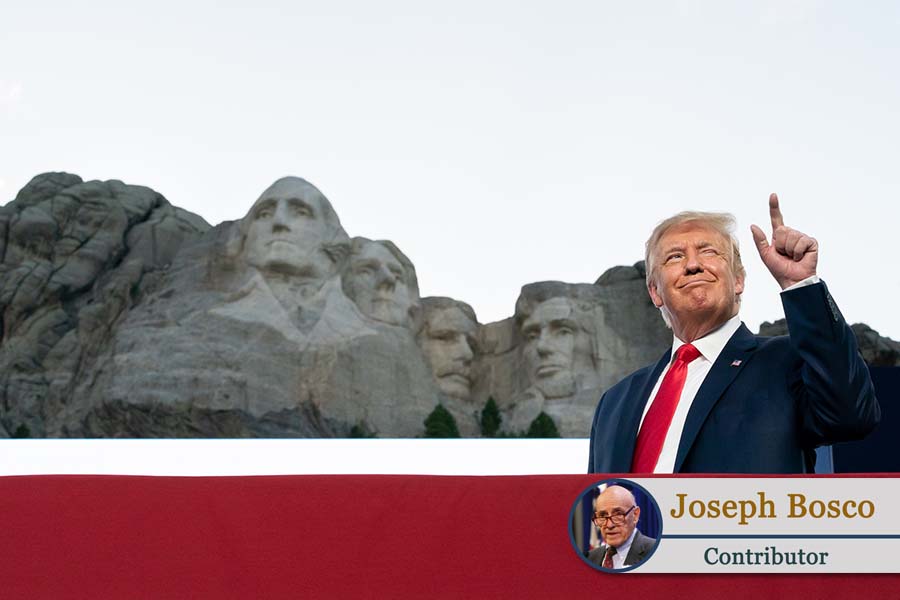 ◎ With nations distracted by the coronavirus, Beijing is vigorously at work consolidating and spreading an even more deadly virus—communist totalitarianism.

In his Independence Day-eve address at Mt. Rushmore, President Trump paid tribute to each of the four political giants of American history whose images grace the mountain. He also lauded national heroes from the worlds of science, entertainment, sports and the military.

Presidents have unique opportunities to impact not only the lives of contemporary Americans but the course of human history. All face challenges for their time. But this president holds office at a moment in history that may prove to be comparable to either the beginning of World War II or the end of the Cold War.

The existential danger, and the historic opportunity, emanate primarily from the People’s Republic of China, established and ruled by the Chinese Communist Party (CCP).

The peoples and economies of the world are deeply enmired in a deadly global pandemic that originated in Wuhan, China, and was disseminated internationally not by random, innocent mistakes of local officials but by deliberately deceptive actions of the CCP, the same pattern of behavior that ill-served the world in earlier epidemics and pandemics.

With nations distracted, meanwhile, Beijing is vigorously at work consolidating and spreading an even more deadly virus — that of communist totalitarianism. The immediate victims of the subjugation are Muslim Uighurs, Buddhist Tibetans, Christians, spiritualist Falun Gong, and political dissidents and independent thinkers.

Radiating out from China, the targets of Beijing’s ideological and military aggression are Hong Kong and Taiwan. The Western world appears united in condemning Beijing’s blatant attempt to impose its dictatorship on the people of Hong Kong.

Congress has risen to the challenge. The House and Senate unanimously passed legislation to impose sanctions on Chinese officials involved in crushing Hong Kong’s semi-autonomy. Sen. Pat Toomey (R-Pa.), who co-sponsored the legislation with Sen. Chris Van Hollen (D-Md.), explained its larger significance: “It’s a message that the United States and the free world are no longer willing to look past some of the worst behavior that’s been occurring. It’s a message that our patience has run out.”

The legislation places mandatory penalties on Chinese officials, police units that suppress the protesters, and banks that finance China’s crackdown. The bill awaits the president’s signature, providing him the opportunity to accept the leadership role the rest of the world eagerly seeks in trying to cope with Beijing’s latest outrage.

Only the United States can stand up to the mounting CCP threat, but others appear ready to follow America’s lead — especially since the international response does not involve going to war over Hong Kong but, rather, taking administrative and financial actions against Beijing.

The president also should begin immediately to enforce the sanctions Congress mandated in the Uighur Human Rights Policy Act he recently signed into law. Once again, this reflects the bipartisan consensus that a major economic power such as China — having benefited so immensely from Western trade, investment and transfer of intellectual property — cannot be allowed to continue violating international norms with impunity.

In addition, Trump should follow through on his prudent action limiting China’s access to U.S. securities and financial markets. By executive order last month, he stopped the Thrift Savings Board from compelling federal government pension fund investment in Chinese companies that help the communist government suppress its population and build weapons to attack Taiwan and the U.S. Seventh Fleet.

Now the Pentagon — finally complying with an act of Congress ignored for 21 years — has released a list of 20 Chinese companies affiliated with the Chinese government’s military-industrial complex and doing business in the United States. The president has the executive power to end that malign activity and should do so forthwith, despite Wall Street’s self-interested objections.

There will be internal resistance. Because Beijing presents the Western world with an array of security and economic challenges, responding to any one of them can be seen as undermining potential progress on other fronts. In the past, this has resulted in political and policy paralysis.

The Trump administration has substantially broken that mold, but not entirely. For decades, Beijing played the North Korea card to induce U.S. inaction on trade, Taiwan, maritime aggression in the South and East Seas, and human rights. Now the script has flipped, and trade is the leverage point on the rest.

But the trade deal cannot be allowed to reduce U.S. resistance to Chinese pressure in other problem areas. While bloodless, the needed punitive measures are not cost-free. They will inflict added economic pain on an international community already reeling from the vast disruptive consequences of the pandemic. Trump, who showed political courage in igniting the trade war in the first place, can ill afford more economic damage to his base.

Yet, the ability of the Western world finally to act in a unified fashion to China’s rapidly increasing threat, with revived U.S. moral and political leadership, will demonstrate a resolute will that Beijing for too long has found missing among its democratic adversaries.

President Trump should seize the opportunity to show that, whatever his earlier reservations, making America great again necessarily involves a global leadership role that will not be forfeited to the CCP, whose actions have been so devastating to countries around the world.

On the security side as well, the administration is responding to China’s challenge, with more to be done. In a welcome policy change, the U.S. Navy is doing its part in the waters of the Western Pacific to confront communist expansionism.

Still, a declarative Taiwan defense commitment from Washington would strengthen U.S. deterrence against Chinese adventurism and potentially obviate the need for increased naval operations. If Beijing knew with certainty that war with Taiwan means war with America, it would see the danger and futility of continued arms buildup and threatening operations. U.S. strategic clarity would fortify Chinese moderates and weaken ambitious, but not suicidal, hardliners.

Ultimately, the West must conclude that the long-term prospect for a peaceful world with an aggressive, communist China is not achievable. For that outcome, as Richard Nixon said a half-century ago, “China must change.” Given the abysmal failure of engagement policies, the international community instead must work with the Chinese people to change the regime from within.

An invigorated information campaign would serve a preemptive and defensive purpose, by directing Beijing’s attention to domestic concerns instead of foreign adventures. Otherwise, the inevitability of another world conflict between democracy and tyranny will need to change the regime from without, but at a tragically greater cost to all. Better the cold war than a world war.