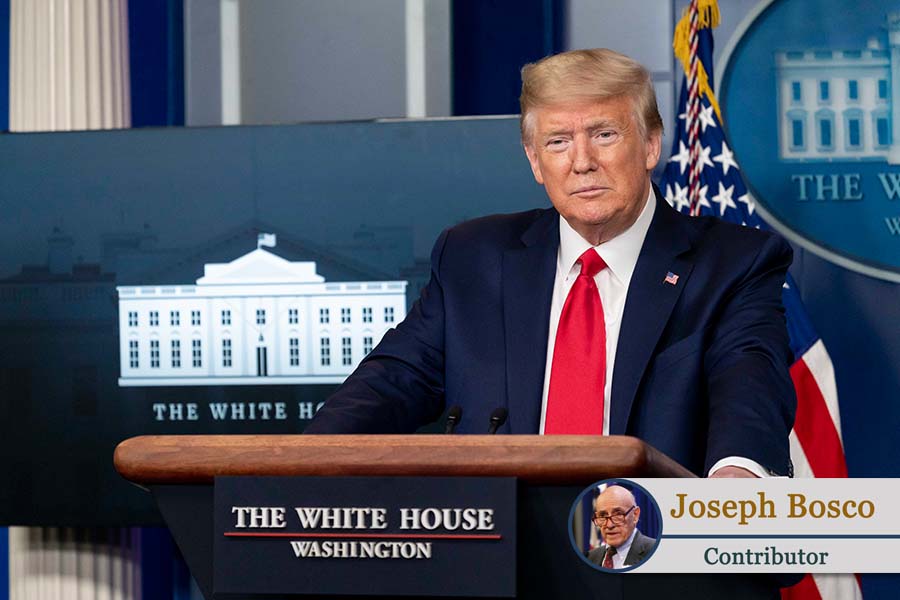 ◎ The Trump team’s record on security and human rights vis-à-vis China to this point surpasses anything done in prior administrations.

Together with its National Defense Strategy, the administration laid its policy cards on the table: For all the strategic moderation, goodwill and cooperation that were supposed to follow decades of generous Western engagement, but did not, China (and Russia) must be treated henceforth as “strategic competitors” and “revisionist powers.”

Trump took on the heavy lifting on trade, the bounty from which enables all the other manifestations of increased Chinese power. After arduous negotiations for nearly two years, he and his trade team succeeded in achieving a Phase 1 agreement that would begin to eliminate inequities that have greatly advantaged China, such as its theft of intellectual property.

The promised structural changes to the Chinese economy would generate a loosening of the communist system, critical to building a healthier worldview in Beijing. The COVID-19 pandemic has put an abrupt stop to that dynamic.

While Trump focused on trade, and on cultivating what he hoped would be a productive personal relationship with Chinese leader Xi Jinping, he enabled other officials to fashion the administration’s responses to the security and human rights dimensions of the relationship, tasks they took on with evident relish.

Taiwan long has been a strategic flashpoint in U.S.-China relations. Encouraged by President-elect Trump’s defiant acceptance of a congratulatory call from Taiwan’s President Tsai Ing-wen, the State and Defense departments, supported by the office of the national security adviser, instituted diplomatic and military initiatives that expanded Taiwan’s status as an important Indo-Pacific security and democratic partner.

Reversing decades of skittishness about sending the United States Navy into the Taiwan Strait, the administration set in motion a program of routine transits and encouraged allied navies to do the same.

Beijing has asserted outlandish claims to sovereignty over the South China Sea, which a United Nations arbitral tribunal ruled unfounded under international law. China rejected the decision and continued expanding its activities in the region, including militarizing artificial islands, and has paid no price for its blatant violations of international law and norms. But, since 2017, the U.S. Navy has challenged China’s maritime lawlessness by conducting regular freedom of navigation operations through the waters, more robust than the “innocent passages” to which it had been limited during the previous administration.

On democracy and human rights, the Trump administration has been on the right side of history and the right side of American values — not only on Taiwan, but also on Hong Kong, on religious and political freedom in China, and on the treatment of Tibetans and Uyghurs.  Secretary of State Mike Pompeo and others have called the world’s attention to China’s obscene concentration camps in Xinjiang.

In light of these and other examples of the Trump administration’s vigorous resistance to unacceptable Chinese Communist behavior long tolerated by his predecessors, the allegations reported to be in John Bolton’s book strike a dissonant note.

In leaked excerpts, the former national security adviser accuses the president of sacrificing America’s national interests with China to benefit his own reelection prospects. But he offers scant evidence to support the charge, and others who seemingly were in a position to know the facts dispute his version.

According to published accounts, Bolton says Trump urged Xi to have China buy more American agricultural products and that would help his reelection prospects. It is an allegation of a non-misdeed. You didn’t have to be in the room to know that Xi cut off Chinese purchases of soybeans and wheat to retaliate against Trump’s tariffs — punishing farmers economically and Trump politically — or that Trump had been pressuring China publicly to reverse that action.

Restoring the purchases would (a) be good for farmers, (b) be good for the U.S. economy, and (c) retain Trump’s tariff leverage over China — all in the U.S. national interest. That those positive results also would help Trump’s popularity and his reelection is obvious, unremarkable, and consistent with the reality that successful presidents tend to get reelected.

While it would be inappropriate and, depending on the circumstances, potentially illegal and even impeachable, to request any kind of foreign intervention in America’s democratic process, the wheat and soybean saga, as reported, does not appear to rise to that level.

What would be more problematic are two other scenarios, which Bolton does not allege. The first would be if Trump asked China to do something that was not in the national interest. The other would be if he asked China to interfere directly in America’s electoral process, either during the political campaign or in the election itself.

Underlying the inappropriateness of seeking any kind of foreign participation in America’s national decision-making would have been a faulty Trump assumption that China actually wants him reelected. That may have been Beijing’s thinking at the beginning of his term, when he seemed personally malleable, and before the extent of his delegation on security and human rights powers to committed subordinates was clear.

It surely has occurred to Xi and his colleagues that this administration is seriously bent on changing the game that has benefitted China for so long, and that the return of more traditional foreign policy establishment figures would work to China’s advantage.

The second of Bolton’s reported allegations against Trump is more disturbing — that he gave a green light to the Uyghur detention camps. If true, that would make Trump potentially complicit in what may be proved one day to be China’s crimes against humanity and cultural genocide. At the least, it would be a clear betrayal of American values.

What makes the charge seem implausible is that it runs counter to the Trump administration’s declared policy of opposition to what China is doing to the Uyghurs, as expressed in speeches by Pompeo and others. Moreover, while the Uyghur Human Rights Policy Act of 2019 was wending its way through Congress, providing for serious sanctions against China’s human rights offenders, at no time did the Trump administration express any misgiving about the legislation, and Trump just recently signed it into law.

While more can and must be done to resist and push Beijing, the Trump team’s record on security and human rights vis-à-vis China to this point surpasses anything done in prior administrations.