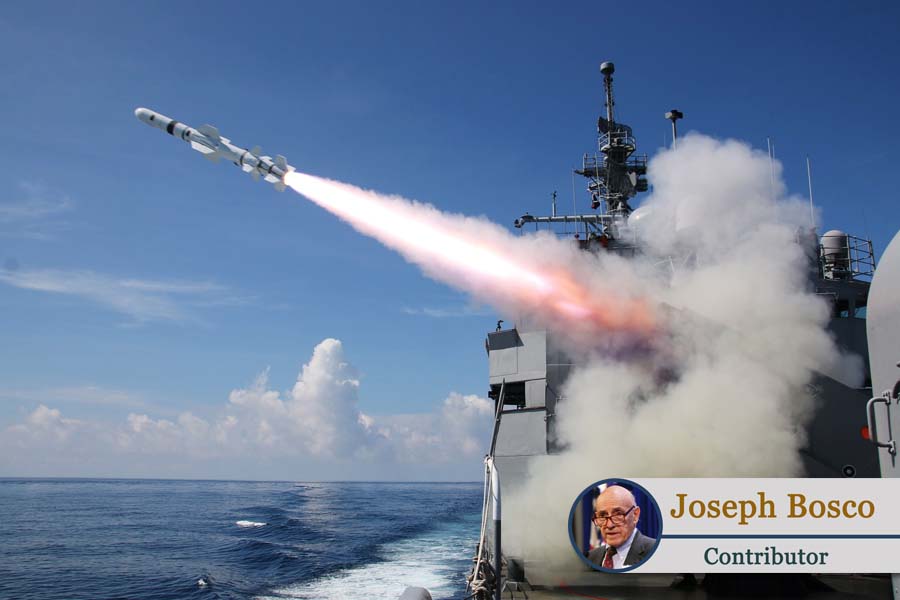 ◎ By requiring a constant strengthening of U.S. capabilities, explicitly devoted to the defense of Taiwan, the Taiwan Defense Act would signal clearer U.S. intentions.

Even before taking office, President-elect Donald Trump signaled China’s communist government that the old ways of doing business were ending. He shocked Beijing and the U.S. foreign policy establishment when he accepted a congratulatory call from Taiwan’s President Tsai Ing-wen and made a dismissive comment about the once-sacrosanct “One China” policy.

Since then, the Trump administration has taken unprecedented actions to deepen America’s security and diplomatic relationship with Taiwan. On a separate but parallel course, Congress passed a succession of broadly bipartisan bills further strengthening America’s moral and diplomatic support for democratic Taiwan in the face of ever-increasing Chinese pressure.

As each landmark piece of legislation sailed virtually unopposed through the House and Senate and was signed into law without reservation by the president, Beijing’s frustration and annoyance levels mounted. It accused America’s political leaders of interfering in China’s domestic affairs and encouraging the Tsai administration to harden its opposition to unification with the communist dictatorship.

The coronavirus pandemic that originated in China and was spread globally by the Chinese government’s inept, reckless and even willful policies severely damaged Beijing’s international reputation. By contrast, democratic Taiwan’s disciplined, transparent and eminently sensible approach to the pandemic earned accolades from the international community. Beijing made   matters worse by churlishly opposing Taiwan’s participation in the World Health Organization, which had rejected Taiwan’s early warning of human virus transmission in China.

Beijing’s chagrin and anger recently boiled over, and it issued a naked threat of force against Taiwan. People’s Liberation Army (PLA) General Li Zuocheng, chief of the Joint Staff Department and member of the Central Military Commission, stated: “If the possibility for peaceful reunification is lost, the People’s armed forces will, with the whole nation, including the people of Taiwan, take all necessary steps to resolutely smash any separatist plots or actions.”

The occasion was the 15th anniversary of China’s Anti-Secession Law (ASL) that purportedly provided a “legal” basis for China to attack Taiwan, not only if it declared formal independence but also if it simply took too long to accept Chinese Communist rule. Henry Kissinger, who once jokingly chided Mao Zedong for saying China could delay using force for 100 years, was less patient and warned Taiwan in 2007 that “China will not wait forever.”

The ASL was Beijing’s answer to America’s Taiwan Relations Act (TRA), which Congress passed near-unanimously in 1979 to pledge a continued moral commitment to Taiwan after official diplomatic relations were terminated. It stated America’s “expectation that the future of Taiwan will be determined by peaceful means” and declared that the use of force or coercion would be seen as “a threat to the peace and security of the Western Pacific area and of grave concern to the United States.” It committed to provide arms “of a defensive nature” to Taiwan.

However, the TRA is not as forthright in stating that America will defend Taiwan as the ASL is in declaring China’s determination to attack it. The U.S. itself would “maintain the capacity of the United States to resist any resort to force or other forms of coercion” against Taiwan. It addressed only the capacity to intervene, not the intention to do so.

That question was put directly by Chinese military officials to Assistant Defense Secretary Joseph Nye in 1995, between episodes of Chinese missile firings toward Taiwan: What would the U.S. do if China attacked Taiwan? Nye’s response: “We don’t know and you don’t know; it would depend on the circumstances.”

From that moment on, China’s strategic planners have been preparing “the circumstances” that will deter U.S. intervention in a cross-Strait conflict. Known as the anti-access, area denial strategy, it relies on a fleet of attack submarines and anti-ship ballistic missiles to keep the U.S. Navy out of the Taiwan Strait where they could expect “a sea of fire.” For the next two decades, the ships made only rare transits until the Trump administration changed the paradigm and made them a relatively routine operational practice, with one exception: The last passage through those international waters by a carrier task force, America’s ultimate show of force, was in 2007.

Enter Congress at another pivotal moment in U.S.-China relations. Around the same time that General Li was issuing his inflammatory threat against Taiwan, Sen. Josh Hawley (R-Mo.) introduced the Taiwan Defense Act that would bolster the TRA’s reference to “resist[ing]” Chinese aggression against Taiwan. The act would require the Department of Defense to demonstrate to Congress that it is actually preparing to undertake that mission.

The Hawley bill focuses on the danger of a PRC “fait accompli” strategy. That could involve a lightning strike to decapitate the Taiwan government and/or immobilize its defenses together with a special operation to capture key governmental and installations — all as Washington was enmired in mulling “the circumstances” for a possible U.S. intervention.

While the TDA may be seen as adding little to the TRA’s call for contingency planning, it highlights the intimate and sometimes conflictual relationship between capabilities and intentions. It was not for nothing that Deng Xiaoping told his colleagues to “hide our capabilities and bide our time.” He knew that capabilities also convey intentions, and he deemed it too soon to alert the West on what the communist regime intended. Xi Jinping has been less shy.

The TRA spoke vaguely about capabilities to “resist.” The Chinese defense officials who confronted Nye in 1995 wanted to know what Washington actually would do. His hesitant, ambiguous response (and silence on the TRA) was given when America enjoyed unchallenged military superiority over the PLA and its meager naval elements.

Now, a quarter-century later, the situation, the circumstances, have dramatically changed and whatever trepidation Washington’s officials may have felt then about conflict with China over Taiwan have compounded exponentially. At least, that’s what PLA officials and Communist Party hawks say they believe when they talk of sinking one or two carriers to kill up to 10,000 sailors and “teach America a lesson.” For them, the capabilities ratio has been so radically transformed where China already has an asymmetrical regional advantage, that U.S. intentions have also been affected — as have Beijing’s.

By requiring a constant strengthening of U.S. capabilities, explicitly devoted to the defense of Taiwan, the TDA would signal clearer U.S. intentions. The very filing of the legislation puts the China-Taiwan-U.S. triangular relationship at a new inflection point. If it passes Congress and is signed into law by the president, it will move U.S. policy just one step short of an open defense commitment to Taiwan, equivalent to the former U.S.-Republic of China Mutual Defense Treaty.

If it is withdrawn or fails to pass Congress because of perceived administration opposition, or if it does pass and the president refuses to sign or vetoes it, the signal to Taiwan, China, the region and the world would be devastating to American credibility. Now that the TDA exists, it must be enacted and signed into law.