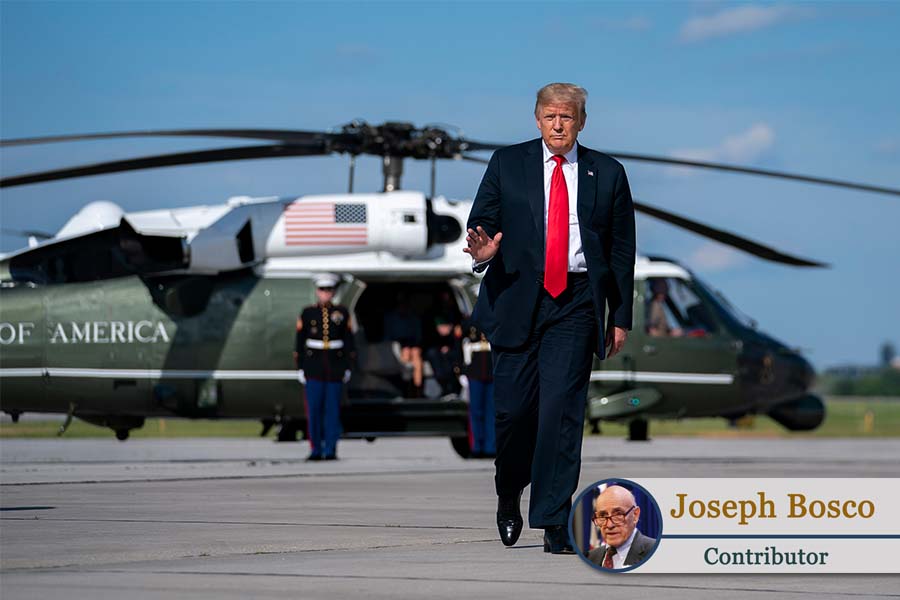 ◎ If Trump continues to approve his team’s substantive approach in implementing his policy objectives, the free world’s prospects will continue to improve.

It was not a proud moment for Trump or for America. Yet, just three days later, Bolton’s replacement as director of the National Security Council, Robert O’Brien, delivered a powerful indictment of the Chinese Communist government and criticized prior administrations’ “passivity” in the face of Beijing’s violations of international law and norms.

Months earlier, O’Brien gave a scathing critique of the international community’s failure to respond to the Uyghurs’ plight: “Where is the world? We have over a million people in concentration camps. I’ve been to the genocide museum in Rwanda. You hear ‘Never again, never again is this going to happen,’ and yet there are re-education camps with over a million people in them.”

No administration member was muzzled or reprimanded, despite ongoing trade talks and Xi’s deep resentment at America’s “interference in China’s domestic affairs.” As Congress moved legislation to do just that, Trump offered no objection and did not press Republicans to oppose it.  The bill sailed through and he signed it into law with a strong supporting statement.

How to square this circle?

Trump campaigned as a transactional operator who could significantly change the status quo in ways his predecessors could not or would not. He was a master of high-stakes negotiations: demanding much and settling for less, playing mind games, all to keep his opponents off balance.  He argued in 2016 that those same business methods would work in foreign policy.

For the first two years, Trump’s disruptive approach succeeded moderately well with China and even better with North Korea. But, in Xi and Kim Jong Un he faced dedicated communist opponents whose coin of the realm was deception and deceit, operating at a sophisticated level of psychological intimidation, and for life-and-death/war-and-peace stakes that more than matched Trump’s real estate acumen and prowess.

The Xi-Kim partners, confident they had taken Trump’s measure, executed a tag-team routine.  Xi abruptly intervened when the Trump-Kim rapprochement threatened a denuclearization breakthrough, summoning Kim to Beijing. He directed a return to the decades-long hard line that had proved so useful with other U.S. administrations. (Pyongyang reciprocated earlier this year, defending Beijing against U.S. criticism over Hong Kong.)

But the two dictators did not immediately give up on Trump and directed their venom at his national security professionals. The bifurcation was modestly successful. The president seemed quite willing to play the role of accommodator-in-chief, if it meant gaining his objectives on trade.

After Commerce Secretary Wilbur Ross banned Chinese communications giants ZTE and Huawei from the U.S. market, Xi asked Trump to reverse the decisions. The president acquiesced in both cases, citing “my personal relationship” with Xi and saying “too many jobs [would be] lost in China.”

Trump followed a similar path of generous rapprochement with Kim. In 2017, he excoriated the North Korean regime for causing the death of American student Otto Warmbier. But, to assuage Kim’s feelings after walking away from the Hanoi summit, Trump declared,  “I don’t believe he knew about it. He tells me that he didn’t know about it, and I will take him at his word.”

The statement drew strong bipartisan criticism in Congress and cannot have pleased administration officials. Strongly supportive of the president’s overall national security goals in the Indo-Pacific — a denuclearized, prospering North Korea and a peaceful, reforming, fair-playing China — they often are caught unprepared by his short-term tactical maneuvers.

More importantly, on the connective tissue between tactics and end goals — the strategy that knits them together — their thinking has substantially diverged. Trump’s more transactional approach assumes that positive personal relations between leaders and mutually beneficial economic arrangements can bridge nationalist and ideological differences. Despite his dramatically different operating style, his basic policy orientation is not fundamentally different from that of prior administrations. It is the Cold War concept of “peaceful coexistence.”

By contrast, from the start of the administration — and with the president’s approval — Trump’s key national security and foreign policy people have enunciated a coherent set of principles and positions on human rights and security issues that address essentially unbridgeable conflicts with the communist regimes in China and North Korea.

Trump himself stated, in announcing America’s new National Security Strategy in 2017, that it was a return to “principled realism.” That meant being “clear-eyed about global competition [and] the central role of power in world affairs [but] grounded in the knowledge that promoting American values is key to spreading peace and prosperity around the globe.”

Both Trump’s personal-centric methods and his administration’s concept-driven approach pursue the same goal: disrupting the disruptors of the post-World War II, U.S.-led international order and their existential threat to the values and interests it protects.

The protracted and disastrous public health, economic and security consequences of the China-originated coronavirus pandemic seem to have caused some presidential rethinking about the value of cultivating personal “friendships” with the likes of Xi and Kim, given the nature of the political systems they head.

With the policy base Trump and his administration have built, they are uniquely positioned to advance the evolving geopolitical dynamic in ways that favor the United States and the West.  Despite the widespread criticism of Trump’s unilateralism and brusque treatment of allies, NATO Secretary General Jens Stoltenberg credits the U.S. president for the allies’ increased contribution to the alliance’s common defense against the immediate threats from Russia and Iran.