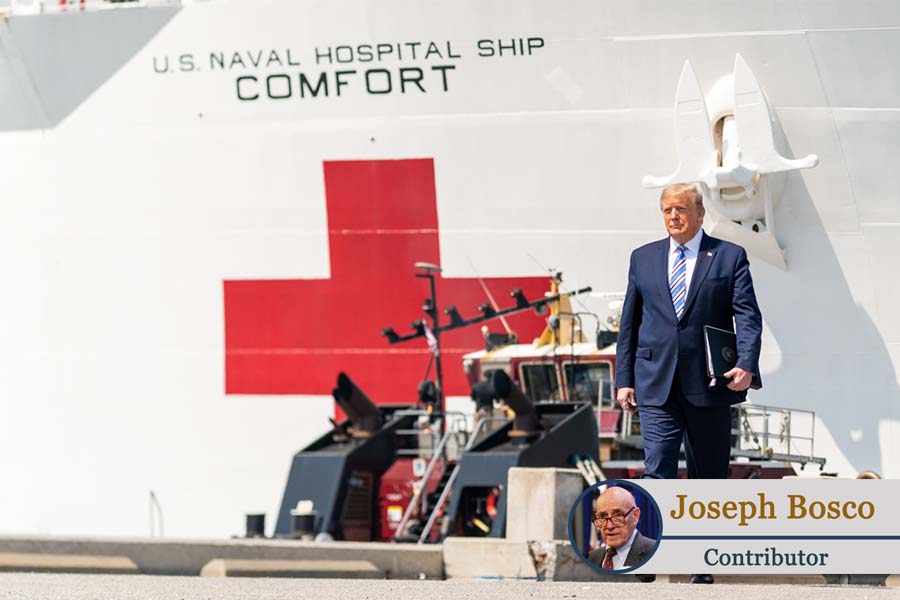 ◎ President Trump has frequently expressed frustration over China’s dishonesty and noncooperation from the start of the coronavirus outbreak.

Cui Tiankai, China’s ambassador to the United States, has said the two countries need to look beyond the pandemic controversy and undertake “a serious rethinking of the very foundations of this important relationship.” The next day, President Trump reportedly declared: “I’m getting tired of China.” Neither Cui nor Trump elaborated.

The Chinese emissary knows that the Trump administration has upended “the very foundations” of U.S.-China relations, from trade to Taiwan to the East and South China Seas to human rights.  Under the least ominous interpretation, he was advocating a return to the arrangements that prevailed before Trump took office.

Those were heady decades for China. Western policymakers bent over backward to accommodate Beijing as it set about rearranging the world order in its favor. Longtime China experts such as Henry Kissinger said this was the correct and natural thing to do in “peacefully” transitioning from the outmoded U.S.-dominant international order.

It was the period during which one assistant secretary responsible for China affairs, when China was firing missiles toward Taiwan, said that Washington was undecided about defending Taiwan.  Another assistant secretary, years later as China was claiming sovereignty over and militarizing the South China Sea, found it impossible to refer to communist interlocutors as anything but “our Chinese friends.”

Trump has broken the accommodationist mold by insisting on new trade arrangements that no longer allow the People’s Republic to lie, cheat and steal with impunity, as Ronald Reagan once said of the Soviet Union’s international practices. But this administration has targeted unlawful and norm-breaking Chinese behavior beyond trade and economics.

Trump has directed the U.S. Navy to resume its monitoring and enforcing role in ensuring freedom of the seas in the Indo-Pacific region far more vigorously than his predecessors. He has advanced the cause of Taiwan in upholding its democratic identity, ensuring its national security as a sovereign and independent state, and gaining the dignity and recognition it has earned as a model international player.

Most significantly in the long run, his administration has shined a light on China’s miserable human rights record, whether in oppressing the culture and people of Buddhist Tibet, imprisoning Muslim Uighurs in Soviet-like gulags, persecuting Chinese Christians and political dissidents, and destroying even the limited political autonomy enjoyed by the people of Hong Kong.

All of these tangible changes in U.S. policy are encompassed in the administration’s National Defense Strategy, which labels China and Russia as “revisionist powers” intent on destroying America’s economic and military power and undermining its democratic model.

Cui and his boss, Xi Jinping, want at least to return to the way things were before Trump disrupted their trajectory — back to the “new type of Great Power relations” Xi offered President Obama at the same time that he falsely promised not to militarize the South China Sea. But under these unprecedented circumstances, the ambassador may have been saying something different and even more threatening for U.S. interests and values.

With the devastation inflicted on the U.S. economy by the coronavirus pandemic, the blow to America’s self-confidence amidst even deeper political disunity, and potentially diminished U.S. military capability, Beijing may feel that it has regained the upper hand in the bilateral relationship.

Cui may have intended to convey to Washington that Beijing expects to dictate more of the terms of the post-pandemic world order. That means, at a minimum, Chinese domination in the Indo-Pacific region. The tangible consequences of this would be:

If Cui’s “rethinking” really means a fundamental reset of bilateral relations in China’s favor, deciphering what Trump meant when he said he is “getting tired of China” is all the more important. The phrasing is subject to at least two conflicting understandings — with diametrically opposite consequences.

The president may have been signaling his anger over the turn of events the pandemic has engendered — wiping out the economic gains for America’s workers and businesses that his policies created over the past three years, accomplishments he saw as setting the stage for a smooth reelection campaign. He frequently has expressed frustration over China’s dishonesty and noncooperation from the start of the outbreak, charging that this was an avoidable world crisis.

Even the U.S.-China trade deal, a crowning achievement of his term and the product of arduous negotiation, has been greatly devalued. The promised $250 billion in purchases of U.S. goods now pales in comparison to the trillions of dollars in losses to the U.S. economy and stock market.

But Trump also has hinted at doubts that China will deliver on the deal: “Let’s see if they do that. Now, if they don’t produce or if we find out bad things [about the handling of the virus] we’re not going to be happy.” The problem with that formulation, and with the reality it reflects, is that Xi Jinping apparently now believes he has the upper hand. He is likely to demand that compliance with terms of the trade deal will depend on Washington not pressing for economic, diplomatic, or even reputational costs on the Chinese government for mishandling the public health crisis.

But Trump has ways out of the dilemma that he partially created by relying so heavily on a congenial personal relationship with Xi. He can make clear to the Chinese dictator that any resort to force or to threats of force against any U.S. ally or security partner, or any further interference with freedom of navigation and overflight, will bring a disproportionate U.S. response that could threaten the regime’s survival. Trump should declare that time has expired on the promise of political reform and that the Chinese Communist Party must start down that painful but peaceful path with the generous support of the West. Xi must confront the choice of having America as China’s best friend or its worst enemy.

The alternative, more pessimistic interpretation of Trump’s “tiredness” remark is that he is psychologically exhausted from navigating the complex and troubled relationship with China, along with the pandemic, and that the steady, death-by-a-thousand-cuts Chinese strategy has finally worn down his resistance. Xi and Cui would wish that were so.

Based on Trump’s past performance, however, and the mood of Congress and the American public, Beijing would be making a major strategic blunder if it adopted this second view of Trump’s likely frame of mind. As for Cui’s re-thinking proposal, he and Xi probably need to think again.