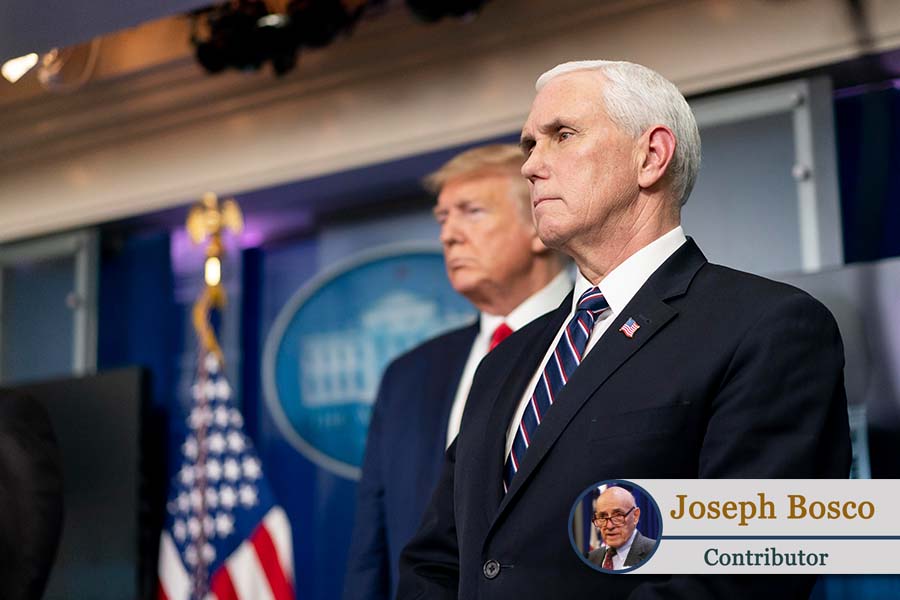 The Information Component of Cold War II with China

◎ President Trump has assembled and enabled a national security team that is focused on China’s existential threat to America’s core interests and is attuned to engage it on the information and values front.

Well before the coronavirus fuse was lit in Wuhan and exploded into a global pandemic, the Trump administration was moving toward a confrontation with the People’s Republic of China in the realm of information warfare. Communist China has waged the ideological component of Cold War II for decades without a serious response from the United States — until now.

President Trump has assembled and enabled a national security team that is focused on China’s existential threat to America’s core interests, and Western values generally, and is attuned to engage it on the information and values front.

From the outset, the president and his economic adviser, Peter Navarro, launched negotiations to achieve balance in U.S.-China trade relations. Concurrently, the administration released its National Security Strategy (NSS) in December 2017 identifying China and Russia as “revisionist powers that use technology, propaganda and coercion to shape a world antithetical to U.S. interests and values.”

The NSS reflected American disillusionment and sense of betrayal with China’s anti-Western hostility, unchanged despite President Nixon’s historic opening in 1972: “For decades, U.S. policy was rooted in the belief that support for China’s rise and for its integration into the post-war international order would liberalize China.”

Like the anti-West campaign the Soviet Union conducted during the Cold War, China and Russia today rely heavily on information warfare. According to the NSS, both “weaponize information to attack the values and institutions that underpin free societies, while shielding themselves from outside information. …  They disseminate misinformation and propaganda.”

The NSS faulted past U.S. efforts in the information competition and pledged new efforts to address the challenge: “The United States must empower a true public diplomacy capability to compete effectively in this arena. … We will craft and direct coherent communications campaigns to advance American influence and counter challenges from the ideological threats that emanate from … competitor nations. These campaigns will adhere to American values and expose adversary propaganda and disinformation.”

The theme was repeated in the administration’s National Defense Strategy document in January 2018 and the Indo-Pacific Strategy Report in June 2019.

Putting declaratory policy into action as the president and his economic team were tightening the screws on Beijing in the trade negotiations, Vice President Pence fired the first direct shot across the bow in the arena of diplomacy and information warfare. In a speech at the Hudson Institute in October 2018, he started by noting the “strong personal relationship forged” between Trump and Xi Jinping.

But he repeated America’s disappointment at China’s unreformed attitude and aggressive behavior even after it was brought into the World Trade Organization: “Previous administrations made this choice in the hope that freedom in China would expand in all of its forms — not just economically, but politically, with a newfound respect for classical liberal principles, private property, personal liberty, religious freedom — the entire family of human rights. But that hope has gone unfulfilled. The dream of freedom remains distant for the Chinese people. [W]hile Beijing still pays lip service to ‘reform and opening,’ [it] now rings hollow.”

The pace of U.S. public diplomacy on China picked up considerably last year. In late October 2019, just a year after his Hudson speech, Pence returned to the subject of China in a major policy speech at the Woodrow Wilson Center. It was a veritable declaration of Cold War II, certainly on the information front.

Pence ticked off the list of China’s human rights depredations: “To uphold the values of freedom-loving people everywhere, we’ve also called out the Chinese Communist Party [CCP] for suppressing freedom of religion of the Chinese people. Millions of ethnic and religious minorities in China are struggling against the Party’s efforts to eradicate their religious and cultural identities.”

He talked about Beijing’s intense persecution of Christians, and recounted Trump administration sanctions and visa restrictions on Chinese governmental and business entities responsible for the internment of Uighurs and other Chinese Muslims. Pence also reaffirmed U.S. support for “Taiwan’s hard-won freedoms [as a] beacon of Chinese culture and democracy.” He noted the demonstrations of over a million people and called on Beijing to respect “the rights of the people of Hong Kong.”

Just a week after Pence’s sweeping declaration of human rights as an essential component in a new U.S.-China relationship, Secretary of State Mike Pompeo delivered a major foreign policy speech in New York.

Like Pence, he traced the disappointing record of four decades of U.S.-China relations and found not only Beijing at fault but also U.S. policymakers for turning a blind eye to China’s manifold violations of human rights: “We all too often shied away from talking directly about the human rights issues there and American values when they came into conflict, and we downplayed ideological differences, even after the Tiananmen Square massacre and other significant human rights abuses.”

Pompeo announced that he would be making a series of speeches addressing each of the areas where China’s conduct has violated international norms and damaged relations with the United States.

In past months, Secretary of Defense Mark Esper and national security adviser Robert O’Brien, both newly appointed to their positions, also have made speeches directly challenging China’s conduct that adversely affects U.S. and global security interests, ranging from the Huawei 5G network to the coronavirus pandemic.

The most recent address on China by a Trump administration official was made by deputy national security adviser Matt Pottinger on May 4, to commemorate that date in Chinese history when young people in Beijing gathered to protest the unfair treatment of China in the post-World War I Paris Peace Conference. The subject would not be on the tips of many people’s tongues except for the fact that Pottinger delivered it in fluent Mandarin. It was favorably received by ordinary Chinese citizens, though CCP spokespersons told Pottinger to “mind his business.”

It is clear that the Chinese people hunger for honest information and friendly communication with the American people, including U.S. officials when possible. The administration should enable Pottinger and other Mandarin speakers to do so on a regular basis. This would be a supplement to, not a substitute for, an expanded and invigorated effort by Radio Free Asia and Voice of America.

The incompetent and/or ill-intentioned actions of the CCP that spawned the pandemic demonstrate conclusively that the Chinese people and people throughout the world are all the Party’s victims and, like victims of the pandemic itself, deserve mutual moral support.

A U.S. administration is finally leveling with the American people on the existential threat posed by China’s communist government. Now the Chinese people are also owed the truth.