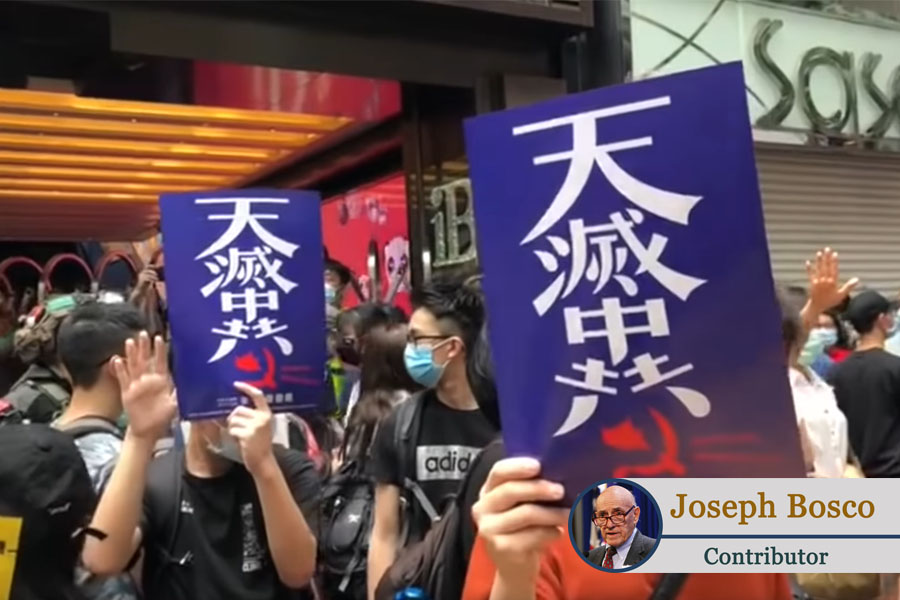 ◎ The failure of past U.S. administrations to confront the communist regime for the sake of expected reforms through engagement has only whetted its appetite for further advances against Western interests.

For decades before the coronavirus emerged from Wuhan and exploded onto the rest of the world, China has been waging a cold war against the United States and the West on a number of fronts: trade and economics, intellectual property, Taiwan’s democratic security, maritime freedoms in the South and East China Seas, proliferation, cyber security and human rights. It has supported North Korea and Iran, and sided with every rogue regime seeking to undermine the West and challenge the global order and its moral underpinnings. On virtually every international norm, Beijing has been aggressively on the wrong side of history.

The failure of past U.S. administrations to confront the communist regime for the sake of expected reforms through engagement has only whetted its appetite for further advances against Western interests. The Trump administration emphatically declared an end to the one-sided relations, and was beginning to make progress on curtailing China’s exploitation in the trade area with its Phase 1 agreement.

The eruption of the coronavirus pandemic stopped that progress in its tracks while destabilizing the global economy and much of the international social order. The outbreak’s origin and the dubious circumstances of China’s handling of it have aroused suspicions that even if its beginnings were purely accidental and innocuous, its spread to the outside world was clearly avoidable and therefore plausibly intentional.

Countries in Asia, Europe, Africa, and Latin America — which had allowed themselves to be seduced by the lure of lucrative economic arrangements with Beijing through the Belt and Road initiative — were already beginning to have second thoughts about China’s intentions. Its gross mishandling of the pandemic — and worse, its sinister exploitation of it — have alarm bells sounding even louder.

Beijing has now chosen the situation in Hong Kong as the focus of its confrontation with world public opinion. It no doubt reasons that other governments, particularly the United States, have their hands full coping with the national health and economic emergencies created by the pandemic to be overly concerned with China’s “internal” problems in Hong Kong.

It has effectively scrapped the “one country, two systems” arrangement that undergirded the turnover of the territory from the United Kingdom to the People’s Republic in 1997. That Joint Declaration and the Basic Law — Hong Kong’s mini-constitution — guaranteed  a special status for Hong Kong for 50 years with civil and political rights not enjoyed by citizens in the rest of China. In other words, freedom and tyranny were expected to coexist harmoniously under one dictatorial government. The incentive for Beijing to honor the arrangement was the West’s assurance that it would treat Hong Kong’s economy and financial system as effectively an extension of the West’s.

But the Chinese Communist Party (CCP) has proved itself to be truer to its authoritarian roots than to its solemn word expressed in international agreements. Not content to wait until 2047 to absorb Hong Kong into its Greater China empire, it has gradually squeezed the territory’s autonomy and reneged on the promise of full self-government on purely local domestic issues. The constrictions on Hong Kong’s limited freedoms — such as a proposed law last year allowing extradition to China — sparked massive protests by Hong Kong residents. The demonstrations have been supported morally and rhetorically by Western governments and media, which Beijing has seized upon to charge foreign interference — a “black hand” — in China’s internal affairs.

The U.S. Congress responded to the CCP’s creeping crackdown by passing unanimously in the Senate, and 417-to-1 in the House, the 2019 Hong Kong Human Rights and Democracy Act. It requires the State Department to certify annually that the Hong Kong authorities are honoring the legal documents that guarantee its semi-autonomous status and provides for the imposition of sanctions against officials violating individual citizens’ civil and political rights.

National security adviser Robert O’Brien warned on Sunday that Washington will do just that if Beijing proceeds with its sweeping new national security law that effectively ends Hong Kong’s special status under one country, two systems. It can be assumed, however, that Chinese leaders anticipated that result and calculated that the cost of sanctions against individuals, or even banks doing business with them — all no doubt indemnified by the central authorities and the CCP — is a price worth paying to “solve” the Hong Kong problem.

The U.S. response that would really send shockwaves through the Chinese government would be the curtailment of Hong Kong’s special economic, financial and visa status under U.S. law and the end of its role as a “cash cow” conduit to the West. Such a Draconian action, however, would have serious consequences for U.S. businesses operating in Hong Kong, and they can be expected to lobby vigorously against it.

But, just as the president was willing to bite the bullet on the imposition of tariffs in the service of securing a favorable trade deal, his national security advisers may well conclude that this is an additional sacrifice worth making in the larger national interest. It would not only serve America’s long-touted commitment to democracy and human rights, especially in the face of China’s many depredations, but also would demonstrate to Beijing that in the current test of wills — the new cold war — it no longer can outlast U.S. policymakers. That message of U.S. resolve could pay important dividends in the military arena where China’s aggressive moves increasingly challenge America’s allies and security partners in the South and East China Sea and the Taiwan Strait.

China’s willingness to escalate the situation in Hong Kong demands a decisive and unanticipated response from the West. It is an existential matter for the people of Hong Kong. Washington needs to convince Beijing that it also will become one for the Chinese Communist Party if it does not quietly recede from this opportunistic and reckless provocation.