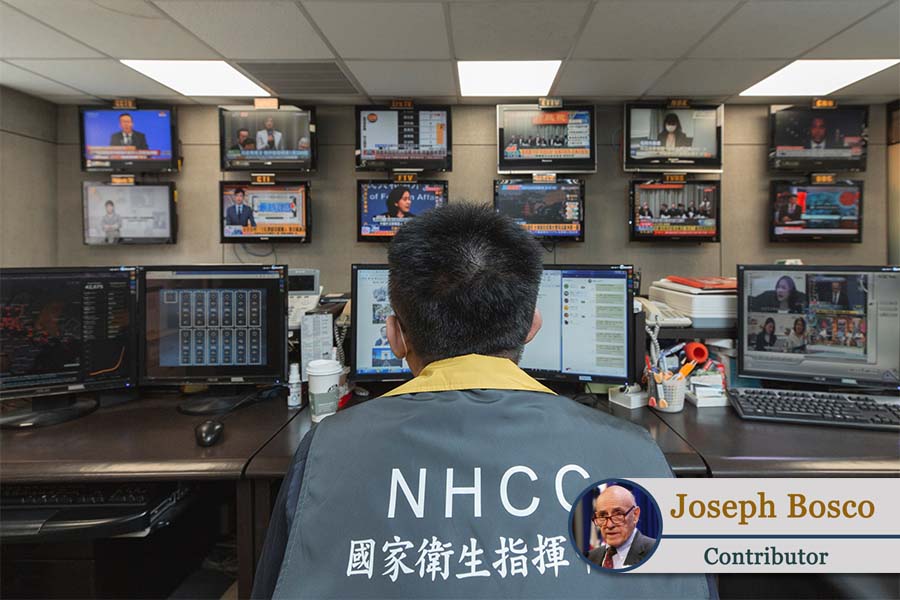 Taiwan: China’s Nemesis Could be the WHO’s Salvation

◎ Taiwan’s can-do spirit has enabled it to stay healthy and safe without having to close down its economy during the coronavirus epidemic.

While schoolchildren in the United States and most of the world are learning their lessons remotely, schools in Taiwan reopened after the Lunar New Year holiday on Jan. 25. So did Taiwan’s businesses.

Taiwan’s baseball season opened on schedule on April 11, though the fans, including President Tsai Ing-wen, have been watching the games on television and online and listening on the radio rather than sitting in the stands.

But the rest of Taiwan’s society and commercial activity are humming along relatively normally, despite — or rather, because of — scrupulous compliance with social distancing; the wearing of surgical masks both inside and outdoors; special attention to hygiene through frequent surface cleaning and hand-washing; and temperature checks and hand sanitization before entering office buildings and shops.

Taiwan’s can-do spirit has enabled it to stay healthy and safe without having to close down its economy. The population of 24 million has reported fewer than 400 cases of COVID-19 and only six deaths.

The prudent, disciplined management of the crisis was made possible because the virus was largely kept out of Taiwan in the first place. Despite disinformation from China, and the apparent complicit misinformation from the World Health Organization, the government began screening passengers from Wuhan, where the virus originated, as soon as human-to-human transmission was detected there on Dec. 31.

Taiwan ignored the representations from Beijing and the WHO that there was nothing to worry about, because it had seen this movie before, many times. Whenever an epidemic or pandemic either originated in China or was exacerbated by its mishandling of it — SARS, MERS, H1N1, avian flu, HIV/AIDS — China has used the same playbook.

Chinese authorities would first deny or minimize the outbreak, then say it was under control, withhold critically-needed information from the international community, or fabricate it and mislead the world. In each case, China’s dishonesty confused and immobilized other countries from taking timely action as the diseases spread, sometimes “only” as an epidemic, at other times exploding into a full-blown pandemic.

This time, Taiwan was prepared. Based on its prior experiences, it had stockpiled the necessary protective gear and resources for medical and frontline personnel. As the virus spread globally, it was even able to donate 10 million masks to the hardest hit countries, including 2 million to the United States.

When Taiwan incrementally sealed off its borders from the affected areas of China, it considered not only the need to protect its own population. Acting in the same spirit of international civic responsibility it consistently shows as a democratic society, Taipei’s health officials immediately notified the WHO of the disturbing reports from Wuhan. Tragically for the world, the WHO’s leadership ignored Taiwan’s warning and continued to echo Beijing’s line.

The WHO’s pathetic performance in enabling China’s massive deception contributed decisively to the eruption of the pandemic and stands in stark contrast to the competence and public-mindedness of Taiwan. Yet, in the bitterest of ironies, Taiwan, the model international citizen, is excluded from participation in the WHO because of China’s absurd objections. That the WHO’s leadership would carry what President Trump has called its “China-centric” bias to the extreme of rejecting critical reality confirms its moral and professional bankruptcy.

When Taiwan’s Foreign Minister Joseph Wu spoke to the Hudson Institute last week, he outlined the methods that established the successful “Taiwan Model” for dealing with the pandemic. But he also noted how Chinese authorities are exploiting the very global crisis they created.

“[F]rom conspiracy theories about the origins of the coronavirus to fabricated government proclamations, China has clearly shown that they do not want this crisis to go to waste. I think the United States these days is also having a small dose of what we have been encounter[ing] in Taiwan for some time.”

President Trump has shown that he recognizes what Beijing and its WHO ally did, and plans to take decisive action. He has said he will start by using the leverage inherent in Washington’s disproportionate financial contribution to the WHO.

He has a range of available options, from cutting off funding, withdrawing and creating an alternative organization, or demanding that Taiwan be admitted as a full participating member despite China’s likely threat that it will not remain in the WHO if Taiwan is there. Another opportunity for reform of the WHO will be available next month when the World Health Assembly, its governing body, could appoint a new director-general.

The incumbent, Tedros Adhanom Ghebreyesus of Ethiopia, appears to have overtly colluded with China before and during the pandemic, has consistently supported Taiwan’s exclusion, and added insult to injury by accusing Taiwan of racism when it disclosed its December warning of an impending crisis. He needs to be replaced by a competent public health specialist who is experienced in pandemics and immune from China’s politicization.

The perfect candidate could come from among Taiwan’s many experts, including its team of Centers for Disease Control officials who detected and reported to the WHO the ominous signs from Wuhan. It would be fitting to replace someone who did almost everything wrong during the pandemic with a person who did everything right.