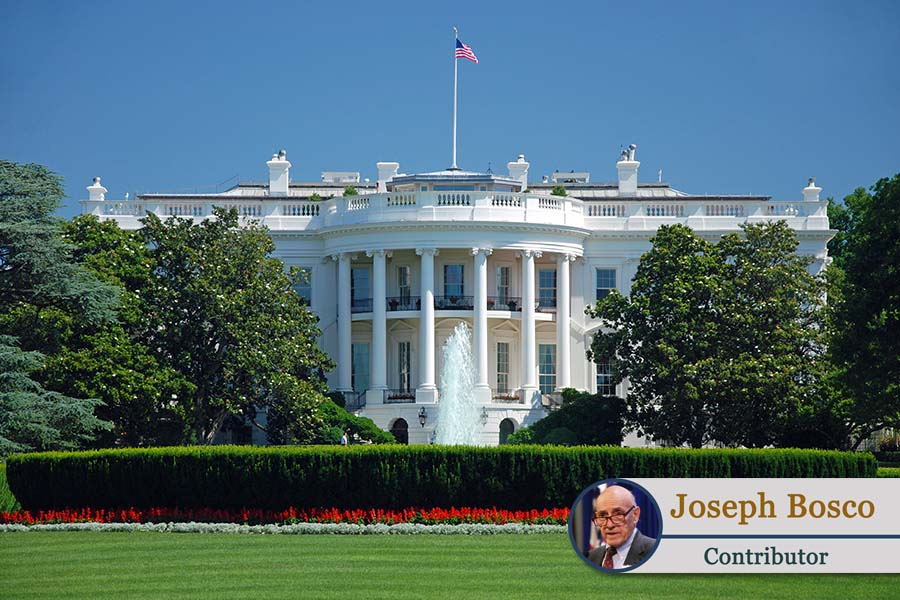 The Wuhan Virus and Regime Change in Washington

◎ Things are happening on a range of contentious issues in the U.S.-China relationship.

The novel coronavirus known as COVID-19 — or the Wuhan virus, after the Chinese city from which it emerged — could not have come at a more advantageous time for China’s communist government. Not for the Chinese people, of course, thousands of whom have perished because of Beijing’s lack of transparency, disinformation and cruel refusal to cooperate with international public health organizations.

No, the advantage goes exclusively to Xi Jinping and the ruling Chinese Communist Party (CCP), whose deceptive practices unleashed the deadly virus to the world. To understand how Beijing benefits from the pandemic, it is necessary to review the geostrategic environment in the months just before the outbreak started.

China and the United States had just completed “phase one” of a long, intense trade negotiation conducted under the mounting pressure of President Trump’s relentless campaign of tariffs and economic restrictions. It was accompanied by a skillful deployment of strategic communications that highlighted the long history of Communist China’s cheating and violations of international trade norms.

Never intended by the U.S. president to be accomplished in phases, his goals were so sweeping and impactful that Beijing could swallow the bitter medicine only in smaller doses to avoid self-destruction. It had to tolerate the reality that China’s economy was slumping under U.S. tariffs, while the U.S. economy and stock market were booming.

Other bones in Beijing’s throat were the U.S. administration’s crackdown on ZTE and Huawei, two telecommunications giants that made inroads into U.S. and European markets and posed major security concerns.

Trump recognized that he may have pushed China as far as it could go on the economic front at this time. In the interest of achieving significant, if imperfect, progress during the lead-up to the 2020 election, and to keep the U.S. stock market soaring, he overcame objections from a few economic hawks and accepted a protracted Chinese submission in the trade negotiation and some limited restraint on telecoms.

For his part, Xi also faced some internal Communist Party dissent over his concessions to the United States, though it did not immediately threaten his hold on power. Meanwhile, things were also happening on a range of other contentious issues in the U.S.-China relationship.

On Taiwan, the most prickly and potentially dangerous of these, both Congress and the Trump administration demonstrated a renewed, even expanded, American commitment to the security and enhanced status of democratic Taiwan.

Trump, perhaps inadvertently, had presaged the new U.S. pro-Taiwan impulse by accepting a congratulatory telephone call from President Tsai In-wen after his election, shocking Beijing and the U.S. foreign policy establishment. Rejecting their concerns, the president-elect tossed off a dismissive remark about the sacrosanct “one China” policy. Though it was soon modulated, the signal had been sent to Beijing that it was about to confront a very different American president with a more confrontational agenda.

Once in office, the Trump administration showed its friendly attitude toward Taiwan by releasing a major arms package that the Obama team had held up for years, conducted higher-level “unofficial” contacts with Taiwan, and began sending U.S. ships and planes through the Taiwan Strait and encouraging America’s allies to do the same.

Another important front in the new multidimensional U.S.-China cold war is the South China Sea, where Beijing has asserted an outlandish claim to the entire body of international waters. It has ignored a United Nations tribunal ruling on the sheer illegality of the claim and the artificial islands China built to advance it.

The United States has played its traditional role since World War II, ensuring freedom of the seas by conducting Freedom of Navigation Operations through international waters adjoining islands Beijing claims as its own. The U.S. Navy has ignored China’s protests and defied its warnings and harassment of ships, consistent with the Trump administration’s National Defense Strategy that labels China and Russia as “revisionist powers” intent on upending the international order and its governing rules and norms.

Washington has lent diplomatic and moral support to the citizens of Hong Kong, who have risen up against Beijing’s blatant reneging on its promise of greater autonomy under the “one country, two systems” formula. And it has publicly condemned China’s expanding human rights violations against the Uighurs, Christians, Falun Gong and other minority or dissident groups.

Trump also has called out Beijing for undermining U.S. and U.N. sanctions on North Korea for its nuclear and missile programs, while temporarily excusing the violations in the context of the broader agenda.

All in all, the Trump administration has opposed China’s aggressive global overreach more directly and openly than any U.S. administration since Richard Nixon’s 1972 opening to China, notwithstanding the president’s lavish praise for Xi’s leadership skills and their supposed friendship. More ominously, from Beijing’s perspective, is that Washington’s more confrontational policy toward China has been succeeding in large part. No longer does most of the world see the 21st century as destined to be led by a wealthy, powerful and authoritarian China. U.S. policy under the Trump administration has begun to bend the arc of history in Asia in a more rules-based and less dangerous direction.The Trump team refuses to accept Beijing’s restrictions on U.S. press and diplomatic freedoms and now demands reciprocity in both, depriving China of a distorted advantage it has enjoyed under prior administrations.

Xi and his colleagues see what is happening and most certainly do not approve. It will be perfectly natural for them to conclude that China’s future would be better assured by a different administration. Beijing wants regime change in Washington.

Enter, serendipitously or otherwise, the Wuhan virus. It has rampaged into Europe and the United States and been awarded an anodyne clinical name by the China-supportive World Health Organization. The way has been opened for Beijing to change the narrative and posture as a responsible international stakeholder, rather than an irresponsible global power-seeker.

Beijing offers ambiguous “aid” to Italy, a tragic victim of Beijing’s incompetence and callous disregard. It denies the disease came from China, or claims if it did, it was the result of a U.S. military plot. It watches with Communist Chinese schadenfreude as the virus spreads through the United States, the stock market crashes calamitously, and the U.S. economy teeters toward recession. As they are shouting from windows of quarantined apartments in Italy — supposedly without bitter irony — “Grazie, Cine.”

Xi might well have asked his colleagues: Who will rid me of this troublesome president? Suddenly, thanks to the export of China’s virus, Trump’s reelection prospects seem considerably less favorable than they did just a few months ago. And a return to a more accommodating U.S. China policy with a new president seems disturbingly more likely.