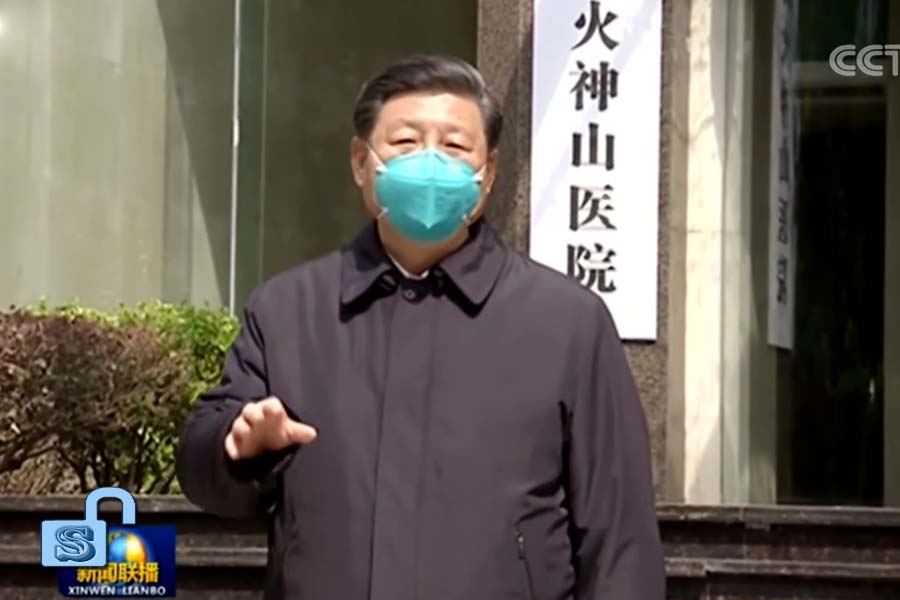 Late February saw an upswing in novel coronavirus cases outside China, with major outbreaks in South Korea, Japan, Iran, and Italy followed by growing public health crises in Germany, France, the United States, and other countries. On March 11, the World Health Organization declared that COVID-19 had become a “global pandemic,” after delaying such a designation for weeks.

At the same time, the People’s Republic of China (PRC) has been on a public relations offensive to promote the communist superpower’s ostensible success in combating the deadly virus. In particular, Chinese leader Xi Jinping’s March 10 tour of Wuhan — the central city where the epidemic began in late 2019 — was widely interpreted as a sign that the tide is turning thanks to the Chinese Communist Party’s decisive leadership.

Reuters, while noting that the PRC had been criticized “at home and globally over its early response to the outbreak, suppressing information and downplaying its risks,” praised Beijing’s “draconian efforts at control” as being instrumental in “curbing” the coronavirus.

It remains to be seen whether mainland China has truly managed to overcome the epidemic, or if the CCP’s recent moves have set the country up for potentially even larger outbreaks in the near future.

Reading the Party’s narrative
Taking into account the CCP’s characteristics as a Leninist regime, official data provided by PRC sources can almost never be taken at face value. For the Communist Party, protecting its image and legitimacy takes precedence over all else, including the well-being of Chinese citizens.

However, hints of the true nature and scale of the crisis can be gleaned by reading between the lines in official CCP propaganda, spotting irregularities in the official narrative, and studying unofficial information, such as insider sources or social media posts.

Footage from Chinese cities shows long lines outside hospitals, sometimes stretching hundreds of meters, raising doubts about the PRC’s ability to provide effective care for coronavirus patients. More worryingly, some videos show people collapsing in the streets or in factories.

On March 4, semi-official Chinese outlet The Paper reported that a patient released without symptoms not only suffered a recurrence of COVID-19 and succumbed to the disease, but also served as a possible asymptomatic carrier. The report was quickly deleted by censors.

Reports by state media show that the PRC continues to mobilize resources to build more makeshift hospitals. In February, the authorities announced the deployment of dozens of “mobile incinerators” to Wuhan, ostensibly for the purpose of medical waste disposal. However, comparing the number of incinerators with the probable amount of waste produced by the claimed total of patients shows that the latter number is far too small to warrant rolling out the new equipment.

The behavior of local governments similarly indicates that the COVID-19 epidemic has yet to reach its peak. Caught between pressure from Party Central to get residents back to work, and the risk of sparking a second wave in the epidemic by doing so, many local authorities are putting up passive resistance to central directives.

In February and March, reports began surfacing that factories have been faking production by turning on lights and machinery simply to meet electricity consumption benchmarks, while the workers themselves stay home.

Reinforcing these stories, local officials in Zhejiang and Hebei provinces admitted to mainland media outlet Caixin that they were faking production data in order to avoid responsibility for subsequent coronavirus outbreaks. Faced with this disobedience, Party Central has had to dispatch inspectors to ensure that work is really being performed.

A Feb. 26 report by The Epoch Times cited insider information as saying that the Shandong provincial Centers for Disease Control and Prevention had tested and confirmed 49 new cases of the coronavirus on Feb. 19. The provincial government, however, only announced two new cases that day.

Factional fighting
The coronavirus epidemic has placed both the CCP and Xi Jinping in an increasingly precarious position. Factional struggle in the Party leadership has intensified further as Xi’s rivals find ways to undermine him amid the crisis.

After Xi’s March 10 tour of Wuhan, Chinese state media portrayed the trip as a brave foray by the CCP “core” leader into the heart of the epidemic and a sign that China was well on its way to overcoming the virus. However, scrutiny of Xi’s trip reveals extreme cautionary measures taken by the Chinese leader and his entourage; suggesting that the epidemic has yet to be quelled in the city. For example, Xi maintained several meters’ distance from the Wuhan medical staff and troops sent to greet him. And while state reports boasted of how Xi visited Huoshenshan, the hospital complex built specifically to handle the coronavirus, they neglected to mention that he had in fact gone to the hospital’s epidemic command center, housed in an unaffiliated sanatorium hundreds of meters away from the Huoshenshan complex.

Because of factional struggle within the Communist Party, it is imperative that Xi score a “victory” in the epidemic that bolsters his authority, and find ways to turn the crisis into an opportunity for the CCP to strengthen its domestic and international standing.

Last month, we wrote about the disastrous impact of the coronavirus epidemic on the already-weakened Chinese economy. The CCP cannot afford to keep the people quarantined until it is safe for them to return to work. Neither can Beijing allow a prolonged delay in economic activity: the longer global supply chains remain disrupted, the likelier multinational companies will accelerate efforts to relocate part of their manufacturing outside mainland China.

On Jan. 24, we published an emergency warning in which we analyzed possible strategies the CCP could take to allay the effects of, or even benefit from the coronavirus epidemic. We wrote that “from the CCP’s perspective, when other countries are distracted with an epidemic, then there will be less international pressure on the PRC and the regime’s internal problems.”

In mid-February, the CCP began to roll out a new propaganda narrative extolling the effectiveness of its epidemic control measures. State media outlets are claiming that “China has bought the world time” to get ready for a pandemic, a propaganda narrative that depicts the PRC as the world’s “savior.”

Meanwhile, the CCP has shifted from covertly promoting conspiracy theories about the origins of the coronavirus, to using its official diplomatic organs to accuse the United States of bringing the pathogen to Wuhan.

Staying ahead
CCP propaganda may seem ineffective and even brazen. But the Party appears to have been largely successful in getting the world to accept its official epidemic figures, as well as in shifting the media focus from the PRC’s botched handling of the initial outbreak to the deficiencies of public health in liberal democracies. This narrative is particularly effective in targeting the United States, where topics like affordable healthcare weigh heavily in domestic politics.

But looking at the global spread of the coronavirus shows that the countries with the worst outbreaks like Iran, Italy, and South Korea tend to be those that have closer political, economic, or diplomatic ties with the PRC, or are looking to establish better relations with the regime. The need to maintain or build “guanxi” with the PRC may have caused those countries to be less skeptical of regime coronavirus data and the true epidemic situation in China, leading to a slowness in enacting necessary epidemic prevention and control measures at home.

Regions like Taiwan and Hong Kong provide strong contrast. More than half of the politicians and the public in Taiwan are very wary of the CCP, especially after a defecting Chinese spy in Australia exposed the Chinese communist regime’s efforts in recent years to subvert Taiwan’s democracy and elections in late 2019. Meanwhile, the pro-democracy movement that began in Hong Kong last year has seen millions of the city’s residents reject local pro-Beijing politicians and champion the end of CCP rule. Distrust of the CCP prompted both territories to react quickly to the coronavirus outbreak, significantly limiting the number of cases and deaths.

Businesses, investors, and governments should not be deceived by CCP propaganda and disinformation. Instead, they should regard official information from the PRC with appropriate skepticism, and look to the examples of Taiwan and Hong Kong in boosting precautions against the coronavirus.