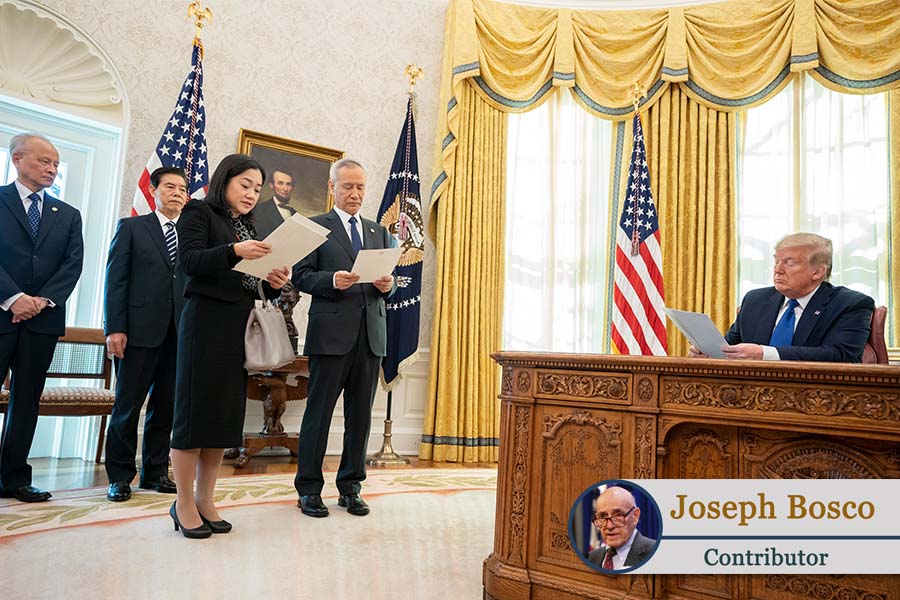 ◎ While the gyrations of U.S.-China relations may seem unpredictable sometimes, the Trump administration clearly recognizes the unprecedented existential threat that Communist China poses to American values and interests.

Even before Donald Trump took office, his approach to China promised to be disruptive and unpredictable in ways that alternately disturbed and reassured foreign policy elites and Communist China leaders.

He accepted a congratulatory telephone call from Taiwan’s President Tsai Ing-wen, shocking not only Beijing but governments and scholars around the world who had grown comfortable with Taiwan’s diplomatic isolation. Trump dismissed their concerns, saying he can speak with anyone he chooses, and that he did not feel hamstrung by the “one China” policy that would be undermined by such high-level contact with Taiwan.

The incident seemed to suggest two steps forward in updating Washington’s relations with both Beijing and Taipei.

But, after a conversation with China’s Xi Jinping, with whom the U.S. president-elect intended to make momentous changes on trade and other economic relations, Trump said he would not talk with Tsai again without first checking with Xi. He didn’t commit to giving Xi a veto, just a heads up. He also indicated that the fundamentals of U.S.-China policy were unchanged for now.

One step back, or tactical retreat?

Once in office, Trump launched his trade war, demanding major structural changes in the Chinese economy and an end to China’s intellectual property theft. He imposed punishing tariffs on several sectors of Chinese imports to the United States. But after months of tedious negotiations and retaliatory Chinese trade actions, including curtailment of U.S. agricultural exports, Trump acceded to a limited “phase one” deal, deferring basic changes in China’s economy to the indefinite future.

With U.S. tariffs remaining substantially in place, it was one step back from economic confrontation with China.

During the trade talks, the president imposed penalties on ZTE, China’s leading telecommunications company, for violating sanctions against North Korea and Iran, preventing it from acquiring American components for its equipment. But, after a call from Xi, his newfound “friend,” Trump relented and lifted the ban to save thousands of Chinese jobs.

Alarmed at the security threat from another Chinese telecom giant, Huawei, the Trump administration prohibited U.S. companies from supplying it with essential components for its equipment. Once again, responding to Beijing’s pleas, the ban was substantially modified but the threat of U.S. retaliation was now out there. As with ZTE, two steps forward, one step back.

The pattern of advance and partial retreat also characterized the Trump administration’s approach to the growing nuclear danger from North Korea. Trump’s initial “maximum pressure” campaign — sanctions, “fire and fury,” delegitimization — caught Kim Jong Un’s attention. But, thanks to Xi’s last-minute intervention and Trump’s diplomatic lovefest with Kim, the kinetic and ideological components of U.S. strategy quickly faded and the situation drifted back to the 30-year negotiating stalemate.

Like the China tariffs, the sanctions on North Korea remain in place, though significantly vitiated by Chinese and Russian subterfuge and smuggling. Kim’s escalating missile launches and curtailment of joint U.S.-South Korea military exercises constitute significantly more than one step back in the Trump denuclearization strategy. Unless the president (a) reasserts pressure on Pyongyang and (b) imposes punishing secondary sanctions on China, it will amount to a complete U.S. backsliding to the feckless pre-Trump era.

But, throughout the ups and down, the twists and turns of U.S.-China and U.S.-North Korea relations, the core of American policy toward China has remained firm. The National Defense Strategy, the Indo-Pacific Strategy Report, and a series of speeches by Vice President Mike Pence and Secretary of State Mike Pompeo have made clear that the Trump administration regards China as America’s most threatening adversary.

In June, Pompeo focused on the government’s assault on religious freedom in China: “The Chinese Communist Party has exhibited extreme hostility to all religious faiths since its founding.”

Last week, the State Department excluded Taiwan from the International Religious Freedom Alliance. Unlike the World Health Organization and the International Civil Aviation Organization, from which Taiwan also is barred because of Chinese pressure, the alliance is entirely a U.S.-created group. Was this a shameful kowtow to Beijing or a bureaucratic oversight? Either way, it’s a definite step backward. Still, over China’s strong objections, the administration has advanced Taiwan’s security position and international status in several incremental but important ways, including approving long-delayed arms sales and elevating official contacts.

But China sees enemies abroad as well as at home. So, also last week, in the latest iteration of administration policy, Pompeo opened a new chapter in what amounts to China’s new cold war against the United States, though he avoided the term. He warned the nation’s governors that China has brought its ideological confrontation directly into the country, targeting individual states and cities as well as Washington, D.C.: “Competition with China is happening inside of your state, and it affects our capacity to perform America’s vital national security functions. … [I]t’s a competition that goes to the very basic freedoms that every one of us values.”

He made clear, however, that China’s campaign is not a true “competition” because China enjoys access to American society and institutions that it denies foreigners in China. “President Trump has talked about reciprocity in trade. We should have reciprocity in all things. Today they have free rein in our system, and we’re completely shut out from theirs,” he said.

Yet, some double standards enjoyed by China are self-imposed by Americans. Highlighting the pervasiveness of China’s infiltration into U.S. institutions, Pompeo related that the U.S. stock exchanges give preferential treatment to Chinese firms by excusing them from the reporting and accountability requirements that all U.S. entities must meet. And they often are bad actors who help oppress the Chinese people and endanger America’s military.

“The Florida Retirement System is invested in a company that in turn is invested in surveillance gear that the Chinese Communist Party uses to track more than 1 million Muslim minorities. California’s pension fund, the largest public pension fund in the country, is invested in companies that supply the People’s Liberation Army that puts our soldiers, sailors, airmen and Marines at risk,” Pompeo said.

He described how reality has dashed America’s hopes for engagement with China: “We thought that the more we interacted, the more it would become like a liberal democracy, like us here in the United States. It didn’t happen, and you all know this. Indeed, under Xi Jinping, the country is moving exactly in the opposite direction — more repression, more unfair competition, more predatory economic practices; indeed, a more aggressive military posture as well.”

While the gyrations of U.S.-China relations may seem unpredictable sometimes, the underlying guiding principles of American policy set forth in national strategy statements and the speeches of the vice president and the secretary of state clearly recognize the unprecedented existential threat that Communist China poses to American values and interests.