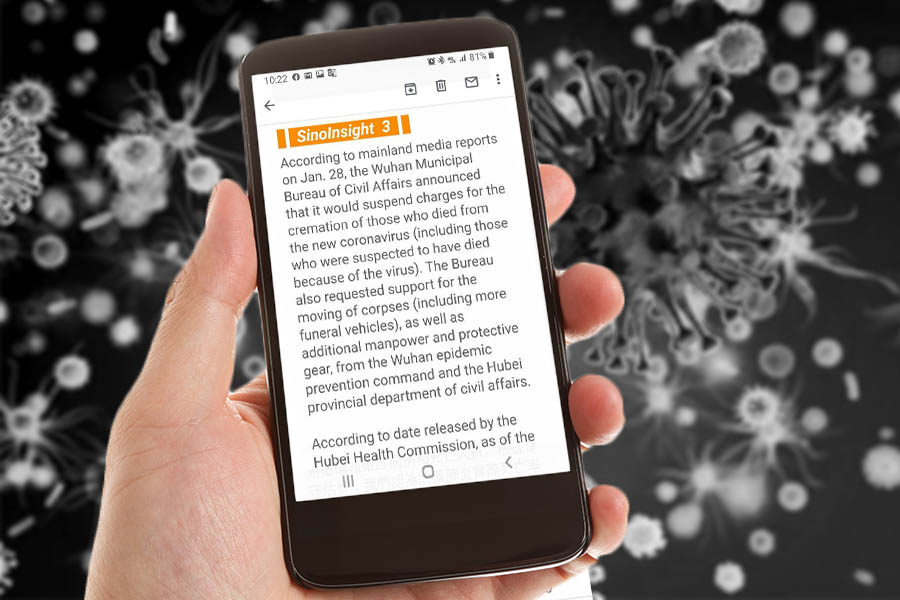 ◎ The following analysis was first published in the Jan. 30 edition of our subscriber-only SinoWeekly Plus newsletter. Subscribe to SinoInsider to view past analyzes in our newsletter archive.

According to mainland media reports on Jan. 28, the Wuhan Municipal Bureau of Civil Affairs announced that it would suspend charges for the cremation of those who died from the new coronavirus (including those who were suspected to have died because of the virus). The Bureau also requested support for the moving of corpses (including more funeral vehicles), as well as additional manpower and protective gear, from the Wuhan epidemic prevention command and the Hubei provincial department of civil affairs.

According to data released by the Hubei Health Commission, as of the end of Jan. 29, Hubei Province had 4,586 confirmed coronavirus cases and 162 deaths; Wuhan City saw 2,261 confirmed cases (49.3 percent of confirmed cases in Hubei) and 129 deaths (79.6 percent of deaths in Hubei). The provincial health authorities are also tracking 28,780 people who have been in close contact with infected persons and 26,632 people have been placed under medical observation.

Our take:
1. In studying official figures provided by the CCP regime, other open source information, and information circulated by Chinese citizens on social media, we have strong reason to believe that the regime has been grossly underreporting the number of confirmed cases and deaths caused by the new coronavirus. By conservative estimates, we believe that the actual death rate is 35 times or greater than the official figure.

A survey of the publicly available information on virus deaths and cremation in Wuhan paints a telling picture:
– On Jan. 20, the CCP officially acknowledged the existence of a new coronavirus that can be passed from person-to-person and that Wuhan is ground zero of the epidemic. That day, the Wuhan authorities said that four people had died from the virus; the authorities ordered a lockdown of the city three days later. On Jan. 29, the Wuhan authorities reported that there were 129 virus deaths—a suspiciously low figure in considering other information.

– According to reports in overseas Chinese language media, funeral homes in Wuhan are operating their cremation furnaces for 24 hours a day; previously, cremations are carried out only after 12:00 p.m. every day. Funeral homes are also reportedly short of funeral vehicles, personnel, and protective gear.

– According to other Chinese language media interviews and disclosures on social media, a total of 700 corpses from local hospitals were “disposed of” by funeral homes on Jan. 24; it is unclear how many of the “disposed” corpses belonged to victims of the coronavirus.

– According to an account this week by a person claiming to be a medical staff at an undisclosed Wuhan hospital, more than a hundred people die “every day” at their hospital (with the implication that the deaths are related to the coronavirus).

– According to a social media post published this week by a person claiming to be a worker at the Qingshan Funeral Home in Wuhan, “the number of dead bodies our work unit has hauled in the past couple of days has soared.” The person claimed to be “hardly able to carry on” and that the funeral home “does not even give us protective clothing.” The person also noted that “Wuchang Funeral Home and Hankou Funeral Home cannot hold any more corpses.”

– According to the Wuhan Bureau of Civil Affairs website, there are seven funeral homes in the city. In compiling publicly available data made available by the seven funeral homes, those funeral homes operate about 80 furnaces and cremate about 60,000 corpses each year. Hankou Funeral Home, one of the seven funeral homes, has 14 furnaces available, according to Hong Kong news website Initium Media. Hankou Funeral Home claims on its website that it has 30 furnaces, cremates about 20,000 corpses a year, and owns 20 funeral vehicles. If we presume that Hankou has 14 instead of 30 furnaces and carries out cremations for 300 days a year, then the 14 furnaces cremate nearly five corpses a day each. And if we presume that only half of Hankou’s 20-funeral vehicle fleet is in use, then each vehicle carries an average of seven corpses to the funeral house every day.

– In August 2016, Wuhan Evening News published an article about how cremation technicians have created a so-called “five-step combustion method” to shorten the average time of cremation from 50 to 60 minutes to about 45 minutes. Assuming that actual cremation time is double what the cremation technicians claim (90 minutes) and that only half of the 80 furnaces in Wuhan are working (40 furnaces), then the city can “dispose of” 640 corpses a day via cremation. This figure is close to the 700 corpses “disposed of” on Jan. 24, according to the account from media interviews which we wrote above.

– According to publicly available data made available by the seven funeral homes, the funeral homes cremate 60,000 corpses annually on average. After accounting for the average death rate of 200 per day (60,000 corpses divided by 300 days), there has been an increase of at least 440 deaths per day in Wuhan since the CCP officially acknowledged the coronavirus outbreak. That is, the increased death rate over the ten-day period from Jan. 20 to Jan. 29 could be 35.2 times that of the official 170 coronavirus deaths (as of Jan. 29), or 5,984 deaths.

– According to a Jan. 30 paper in British medical journal The Lancet, the paper’s authors examined 99 patients who were infected with the Wuhan coronavirus between Jan. 1 to Jan. 20 and found a mortality rate of 11 percent at the cutoff for the research study (Jan. 25). Michael Ryan, executive director of WHO’s Health Emergencies Programme, said that the fatality rate of known cases and deaths is around 2 percent. In extrapolating from 5,984 deaths between Jan. 20 to Jan. 29, the actual number of confirmed cases could be between 54,400 (11 percent mortality rate) to 299,200 (2 percent mortality rate).

2. In comparing central government and local government data on the coronavirus, there are obvious signs that one side or all sides are actively partaking in fraudulent behavior.