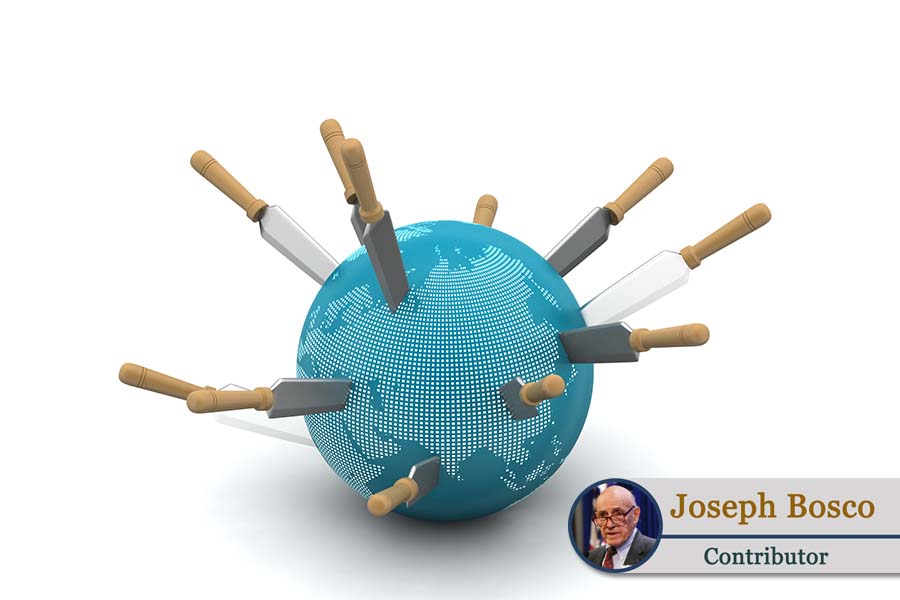 ◎ The threats to global security go beyond those from the major “revisionist” powers.

Channeling Ronald Reagan’s condemnation of the Soviet Union as an “evil empire,”  George W. Bush’s 2002 State of the Union address labeled North Korea, Iraq and Iran an “axis of evil.”

As with Reagan’s moral proclamation, Bush’s use of the term “evil” to describe recognized states scandalized some in the international community, although it accurately described the nature of those regimes. All three brutally mistreated their populations and were complicit in acts of terrorism and/or aggression.

But any suggestion that Pyongyang, Baghdad and Teheran were linked at that time in a coordinated strategy, similar to the original Berlin-Rome Axis pact in World War II, was a bit of an overstatement.

For one thing, Iraq and Iran had just fought a six-year war at the collective cost of up to a million dead. Nor was there then credible evidence of Pyongyang colluding operationally with either Baghdad or Teheran against the West beyond harsh rhetoric and the occasional arms sales it routinely carried on with several Middle Eastern states.

Today, however, the four states named above that see themselves as implacable adversaries of the United States are, in fact, cooperating to oppose American interests whenever and wherever possible.

They clearly adhere to the realpolitik principle that “the enemy of my enemy is my friend, or at least my ally of convenience.”

Those regimes are at odds with the United States because of divergent strategic interests, as well as fundamentally conflicting values. But what differentiates them from other states which similar anti-U.S. interests and anti-Western values is their aggressive intentions to act on those differences — they are, in fact, aggressor states.

The National Defense Strategy (NDS) issued by the Department of Defense in 2018 declares that “China and Russia are now undermining the international order from within.”

But it noted that both powers also use traditional and nontraditional means to attack the system itself from without. “China is leveraging military modernization, influence operations, and predatory economics to coerce neighboring countries to reorder the Indo-Pacific region to [its] advantage.”

“Concurrently,” the NDS states, Russia has been making similar moves in its region. “Russia seeks veto authority over nations on its periphery in terms of their governmental, economic and diplomatic decisions, to shatter the North Atlantic Treaty Organization and change European and Middle East security and economic structures to its favor.”

The threats to global security go beyond those from the major “revisionist” powers. “Rogue regimes such as North Korea and Iran are destabilizing regions through their pursuit of nuclear weapons or sponsorship of terrorism.”

Compounding the menace each of these anti-Western sources poses individually, there is more than the semblance of a Beijing-Pyongyang-Moscow-Tehran axis. The evidence of their coordination of efforts is right before our eyes.

Communist China has been formally allied with North Korea at least since the outbreak of the Korea War in June 1950, and it has propped up the Pyongyang regime economically ever since.  Enabling and protecting its pursuit of nuclear weapons and ballistic missile systems to deliver them has encouraged North Korea’s defiance of both U.S. threats and inducements.

At the same time, an alliance with North Korea has been strategically profitable for Beijing, making it the indispensable player in the growing nuclear and missile threat and providing it with enormous leverage over the West on other issues across the board.

Second only to China in its diplomatic protection of the Kim regime and its undermining of U.S. and international sanctions has been North Korea’s other giant neighbor, Russia. Like China, it also has extracted Western concessions for its illusory cooperation — formally supporting just enough sanctions to gain credibility in Western eyes, but never enough to bring the Kim regime into actual compliance.

Parallel with their tandem moves emboldening North Korean recalcitrance, China and Russia have deepened and broadened their bilateral strategic cooperation against U.S. security interests through a series of joint military exercises.

Over the past week, the two powers expanded their separate contributions to Iran’s military capabilities into a three-party arrangement. China’s defense ministry announced that Russia and Iran will join the People’s Liberation Army Navy in joint naval drills in the Indian Ocean and Gulf of Oman just as regional tensions have increased with the growing U.S.-Iran confrontation.  Beijing and Moscow leave no doubt as to whose side they are on.

Meanwhile, a potential crisis looms across the Taiwan Strait as Taiwan’s presidential election approaches and Beijing strives to influence voters to reject President Tsai Ing-wen and her refusal to yield to Chinese pressure and accept its claims over the island’s democratic sovereignty.

The death of Taiwan’s top general and other military officials in a helicopter crash last week, reportedly in an equipment-related accident, has only aroused concerns of a nefarious Chinese role in the political campaign.

American officials undoubtedly are on the alert for the likelihood of simultaneous crises erupting from members of the quartet of evil-doers. In response to the U.S. strike that killed Iranian General Qassem Soleimani, the head of Iran’s military described an “axis of resistance” among Iran’s terrorist proxies and partners in Lebanon, Iraq, and Syria. But the China-Russia-North Korea-Iran linkages may be even more ominous and will require the sustained attention of America’s military and political leaders.