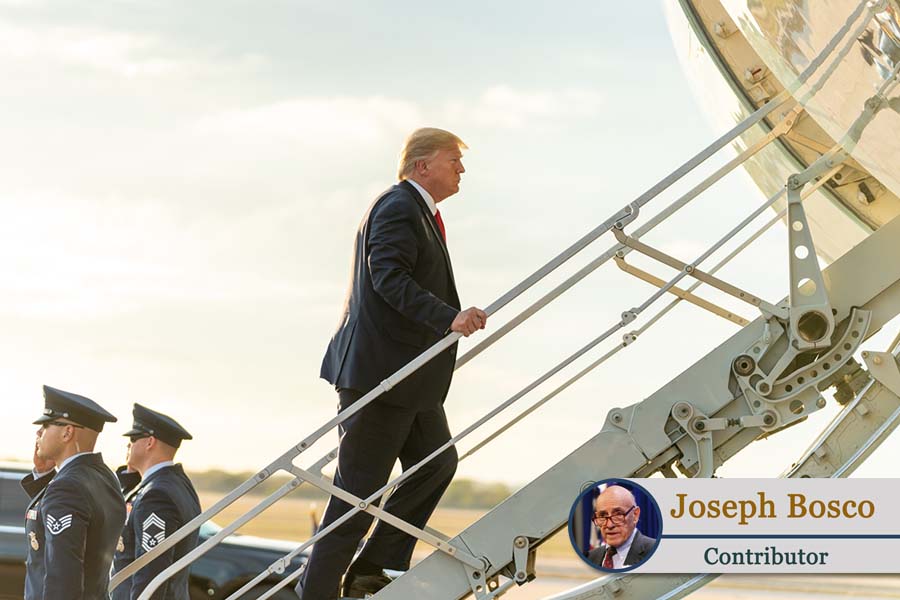 Trump Should Return to What Worked on North Korea, and in the Cold War

◎ President Donald Trump and North Korean leader Kim Jong Un are back to square one.

President Donald Trump and North Korean leader Kim Jong Un are back to square one, using the same personal insults and existential threats that launched their official communications two years ago.

Apparently gone now are the “beautiful letters” and professed reciprocal affection that characterized the relationship during the intervening period. It is worth examining what led to the policy shifts from antagonism to budding cooperation and back again to open hostility.

Beyond the initial “rocket man” rhetoric was a U.S. “maximum pressure” campaign that had three mutually-reinforcing components: sweeping economic sanctions, serious warnings of military action if North Korea expanded its security threat against America and/or its allies, and a regime-challenging frontal condemnation of Pyongyang’s atrocious human rights record.

The Trump administration’s tri-dimensional policy assault, together with the president’s forceful personal style, presented North Korea with the credible prospect, for the first time since the Korean War, that its hold on power was in mortal danger.

Pyongyang suddenly became receptive to Trump’s lavish overtures that promised a secure and economically beneficial future if it would agree to the end of its nuclear and ballistic missile programs. The regime’s rhetoric softened considerably and the pace of preparations quickened for a historic Trump-Kim summit in Singapore in June 2018.

At that point, Chinese leader Xi Jinping, who had never bothered to meet Kim during his five years in power, precipitously summoned his dependent North Korean ally to Beijing for a strategy session. It turned out to be the pivotal turning point in U.S.-North Korea nuclear negotiations in the Trump era. After that meeting, Pyongyang’s tone became notably harsher, reviving some of its earlier hostile anti-U.S. rhetoric.

While no one in the West knows how the conversation went, it is at least plausible to surmise that Xi, who by then had had several direct opportunities to assess Trump’s character and will, significantly stiffened Kim’s resistance. He likely delivered four distinct messages to Kim: 1) that Beijing still had his back and would provide an economic lifeline against U.S. regime-threatening sanctions; 2) that Trump was bluffing about either using force against North Korea or subverting and overthrowing the regime; 3) that Trump could be substantively separated from his hard-line aides; and 4) that China’s national security interests were so implicated in North Korea’s fate that no agreement could be reached without its involvement and consent.

Xi’s sudden proprietary interest in the outcome of U.S. talks with the Democratic People’s Republic of Korea (DPRK) was a dramatic departure from decades of Chinese dismissals of Washington’s entreaties for help, and its cavalier assertion that the nuclear issue was purely a bilateral U.S.-DPRK problem.

In fact, Communist China has prospered politically, diplomatically and strategically from the decades-long negotiating stalemate over North Korea’s burgeoning nuclear and missile programs. It has successfully played the West’s help-us-with-North Korea card over and over when challenged for its own misdeeds on trade, proliferation, human rights, Taiwan and aggression in the South and East China Seas.

The bottom-line lesson from Kim’s mandatory visit to the Chinese woodshed for a dose of geopolitical reality: China has no intention of allowing Pyongyang to trade away its ever-protective insurance policy and Beijing’s invaluable leverage over Western policymakers.

However the North Korean dictator may have been both intimidated by Trump’s threats and tempted by his offers, his economic master’s voice prevailed: Beijing has the veto. There has been no movement on denuclearization during the subsequent Trump-Kim meetings in Hanoi and Panmunjom or in the interminable lower-level talks. Meanwhile, Pyongyang has conducted 13 additional missile tests and ramped up its rhetoric, culminating in a Kim ultimatum: progress on sanctions relief before New Year’s Day or delivery of an unwelcome “Christmas gift.”

How should the Trump administration respond to the deteriorating situation? U.S. officials have called the escalating missile tests “deeply troubling” and warned that their continuation would be “deeply counterproductive.” Beyond the rhetoric of moral outrage, which Pyongyang and Beijing have heard and dismissed before, policymakers need to reach deeper into America’s toolkit and bring back the maximum pressure campaign.

Sanctions should be imposed on any North Korean entities or individuals not yet subject to them.  More importantly, it is long past time for sweeping sanctions on Chinese persons, banks and other institutions that are openly undermining existing sanctions on Pyongyang. The president should make clear to his transitory friend Xi that such violations are no longer “OK.”

The use of reactive or preemptive force against North Korea certainly can be discussed as a critical essential measure if it takes further threatening action against the United States or its allies. It should be made known that serious contingency talks with Japan and South Korea on this existential matter are under way — and that China cannot protect North Korea from the consequences if such action should prove necessary.

But kinetic measures are not yet necessary to solve the North Korea problem by removing the regime that is the root cause. The Western instrument that was key to peacefully bringing down the Soviet Union — information warfare, deployment of the truth weapon — is readily available.

Pyongyang is terrified at the prospect of its population learning how their neighbors in South Korea are living as compared to the North Korean “paradise” granted them by the rotund leader on the white horse. Or, how select members of Kim’s elite ruling class enjoy their special bounty and privileges. Or how the rest of the world has nothing but contempt and disgust for the regime’s inhumane treatment of its population, especially those held in the network of Nazi-like concentration camps.

President Trump touched those raw nerves in three important, but since abandoned, messages on the Kim regime’s depravity in speeches at the United Nations, the South Korean National Assembly, and the State of the Union. They should be revived, packaged into deliverable media instruments, both sophisticated and rudimentary, and gotten into the minds and hands of the long-oppressed North Korean people. As the Cold War demonstrated, moral actions can have strategic consequences. It’s time for Kim to go — or to submit to the will of the North Korean people in regular, contested, internationally-supervised elections. (Xi Jinping will take note.)

After all, George Washington, who also rode a white horse, rejected the opportunity to be made king for life and trusted the people to choose their leader. Surely the confident and beloved Kim could do no less.