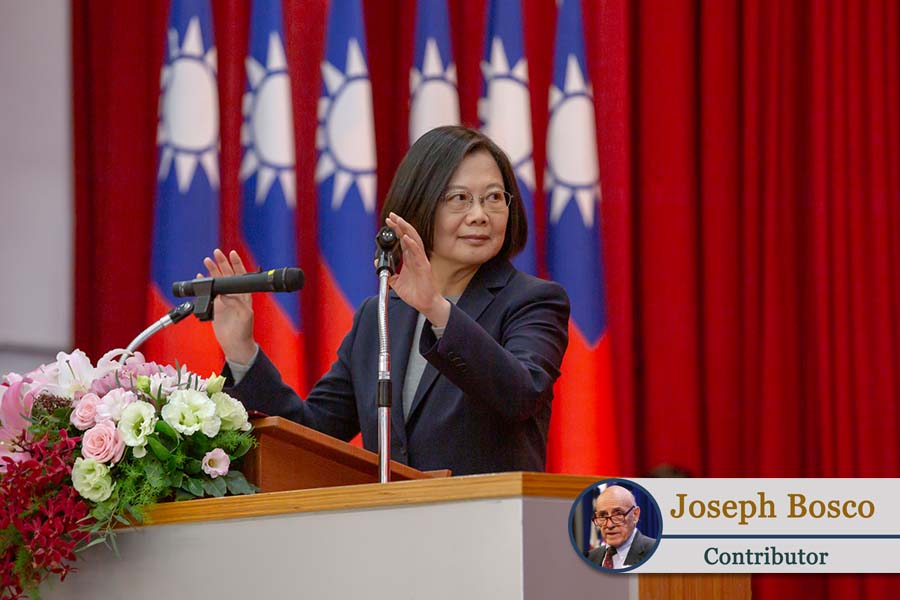 ◎ Washington’s view of its security partnership with Taiwan has evolved.

At a pre-election policy forum last week, Taiwan’s President Tsai Ing-wen delivered an important national security message not only for Taiwan but for the United States.

Focusing on “the tension rise between the U.S. and China,” she declared that, for Taiwan, “the possibility of relying on strategic ambiguity is declining.” She noted the geostrategic reality that “democracy and authoritarianism are in conflict” in the region and argued that Taiwan’s interests and values mandate that “we stand with the mainstream international society.”

Tsai took justifiable credit for her administration’s record in helping Taiwan “become recognized by the entire world as the most stable, most reliable democratic partner in Asia.”

But she astutely noted that Taiwan is more than just another member of the mainstream values community. Geographically and ideologically, “Taiwan is on the front line of the confrontation in the Western Pacific.”

That formulation meshes neatly with statements in the national security documents issued by the Department of Defense (DOD) under the Trump administration. The strategy documents reveal an evolving recognition of Taiwan’s importance in Washington’s own security planning.

DOD’s National Security Strategy, published in December 2017, declares minimally but essentially: “We will maintain our strong ties with Taiwan in accordance with our ‘One China’ policy, including our commitments under the Taiwan Relations Act [TRA] to provide for Taiwan’s legitimate defense needs and deter coercion.”

The unclassified version of the National Defense Policy, released in July 2018, states as one of America’s security objectives “defending allies from military aggression and bolstering partners against coercion.” It makes no specific reference to Taiwan or any other country, except for the two states that are generating the greatest security concerns:

“Russia and China are revisionist powers [that] want to shape a world consistent with their authoritarian model.” It accuses Beijing of “leveraging military modernization, influence operations, and predatory economics to coerce neighboring countries.”

The Indo-Pacific Strategy Report, promulgated in July 2019, names “the Indo-Pacific [as] the Department of Defense’s priority theater.” It describes China’s military threats in the region and sees Taiwan as a critical component. “The United States has a vital interest in upholding the rules-based international order, which includes a strong, prosperous, and democratic Taiwan.”

The statement is entirely consistent with Tsai’s declaration that “the leader of Taiwan must safeguard Taiwan’s sovereignty, democracy, and freedom” and is quite inconsistent with Beijing’s intentions toward Taiwan.

One section of the report is devoted to Taiwan as an important “security partner” and describes U.S. obligations under the TRA “as part of a broader commitment to the security and stability of the Indo-Pacific.“

Washington’s view of its security partnership with Taiwan has evolved from one of carrying out an obligation to support Taiwan’s self-defense, to seeing it as an integral part of U.S. security needs and interests in East Asia.

Taiwan is described in the report as one of “four countries — democracies — [that] are reliable, capable, and natural partners of the United States … contribute to U.S. missions around the world and are actively taking steps to uphold a free and open international order.”

Clearly, President Tsai, and Taiwanese generally, welcome America’s full recognition of Taiwan’s key role as a provider, not just a recipient, of regional and international security.

But she also offered a message of reassurance to those in the United States who fear that too explicit a U.S. commitment of support could encourage adventurous behavior, precipitate a crisis with China, and draw Washington into a conflict across the Taiwan Strait.

While advising China that, “We do not yield in the face of pressure,” Tsai also stated, “Nor do we engage in provocation when we receive support.” She expressed confidence that her government has found the right formula for “sustaining Taiwan’s sovereignty while stabilizing the cross-strait situation and gaining international affirmation.”

Finally, in a generous gesture to her political opponent, Han Kuo-yu, she asked him to “take special note” of the principles that should guide any Taiwanese leader in preserving Taiwan’s freedom and democracy: that China damages the status quo by “exploiting” [prior understandings] to “hollow out” Taiwan’s security, that sovereignty cannot be “traded away for short-term economic gain,” and that “China is presently penetrating and infiltrating Taiwan’s entire society.”

If Tsai is reelected, or if Han wins and commits to abide by the responsible approach she practices and advocates in cross-strait relations, Washington should finally reciprocate by discarding its own policy of strategic ambiguity and making clear to Beijing that America will defend Taiwan against any Communist Chinese aggression or coercion.

In addition to announcing that security commitment formally, President Trump should communicate it in a congratulatory telephone call to the winner of Taiwan’s election in January. Considering that such calls are made to the leaders of states that threaten America’s interests and seek to undermine our values, it’s the least that can be done for a valiant democracy that is contributing to U.S. national security. Brave leaders who share America’s values and interests should be at least as welcome in Washington as genocidal dictators who threaten them.

In America’s national and global interest, the president and Congress should come together and make it happen.