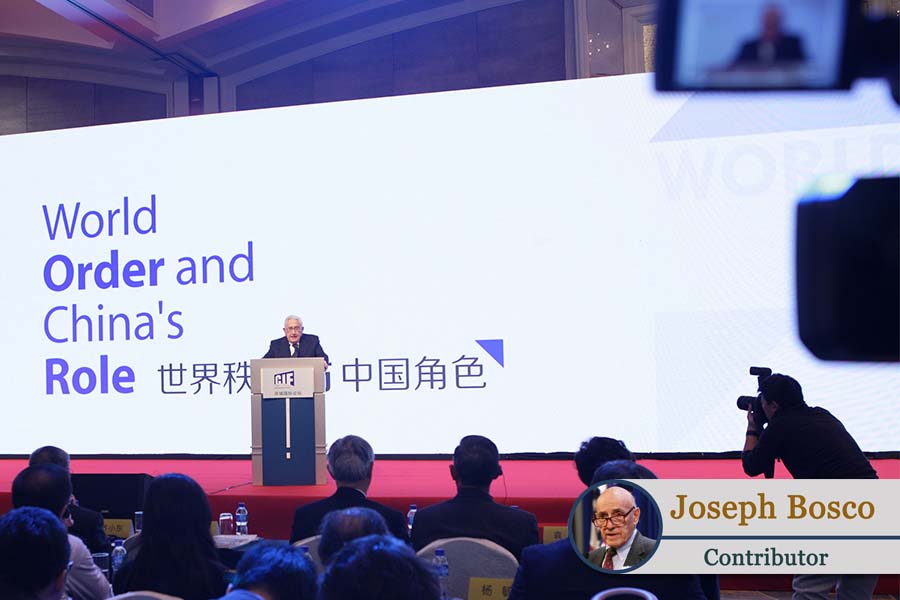 ◎ What distinguishes the Trump administration from its predecessors is the recognition that decades of U.S. engagement with China have utterly failed.

No living person has had a more profound influence on relations between the United States and the People’s Republic of China than Henry Kissinger. He served as President Richard Nixon’s national security adviser and collaborator in opening to China, then as secretary of State under Nixon and President Gerald Ford.

For the next 43 years, he advised every subsequent American president and, simultaneously, every Communist Chinese leader, on their respective policies toward each other. Generations of aspiring China scholars and national security thinkers devotedly followed Kissinger’s realpolitik engagement philosophy.

Many rationalized that policy as necessary to facilitate China’s economic development, followed inevitably, they assured us, by political reform and moderation of China’s view toward the world.  Nixon had warned the opening was critical lest China continue “to nurture its fantasies, cherish its hates and threaten its neighbors.”

Kissinger, however, never bothered with the political reform potential of engagement; he was concerned only with the geostrategic implications: balancing China against the Soviet Union to facilitate detente, and getting its help for a graceful exit from Vietnam. The first goal fell short, and China was content to see America’s humiliating abandonment of Vietnam.

In the purely economic realm, Henry Paulson played a pivotal role in the expanding intermingling of the American and Chinese systems in trade, financial markets and commercial transactions. He pursued the coupling of the U.S. and China economic and financial systems during his decades in investment banking, then as U.S. Treasury secretary, and finally, like Kissinger, as a prominent adviser to both American and Chinese government leaders.

Both the political guru and the financial wizard have been moved recently to view the results of their handiwork and have found reason to express concerns regarding the parlous state of U.S.-China relations.

In a speech last month before the U.S.-China Committee, Kissinger stated that in the present state of U.S.-China relations, the two countries are headed for a “catastrophic” confrontation even worse than the two world wars. He was apparently insouciant about his critical role for over 40 years in creating the conditions that brought the world to this point.

Still unwilling or unable to acknowledge that Communist China is the problem, Kissinger relied on his perception of what may be called amoral equivalence: “It’s no longer possible to think that one side can dominate the other. They have to get used to the fact that they have that kind of a rivalry.”

But if one side might be said to bear greater responsibility for the crisis of confidence, he suggests that the fault lies with Washington’s pique at having a near-peer competitor: “There is no doubt many aspects of the evolution of China are challenging to the U.S. It never happened before that two major countries in different parts of the universe were in similar positions.”

Paulson, in his keynote address to the 2019 New Economy Forum, said U.S.-China relations “are now headed in precisely the wrong direction.” He said his warning last year of “an economic iron curtain” is now more urgent because of the escalating tariff and trade disputes.

“Those of us who’ve spent our lives around markets, business, and economies have learned a basic truth: It is enduring and persistent competition that produces the very best long-term results for any company and country,” he said.

Paulson does acknowledge that “real competition requires a level playing field and a fair go for all players” and notes that “the Chinese state is enlarging, not shrinking, its direct role in companies that would compete better and more fairly if they were run on a commercial basis.”

That is his only reference to fairness and reciprocity, which are the central thrust of President Donald Trump’s challenge to China on trade. Instead, Paulson’s main emphasis is on the danger of decoupling — Trump’s strategy for applying leverage on China to make the structural reforms necessary for a level playing field in economic relations.

“Decoupling China from U.S. markets by delisting Chinese firms from U.S. exchanges is a terrible idea,” he said. “So is forcing Chinese equities out of the MSCI indexes.” This, despite the fact that Chinese companies are listed on the U.S. exchanges without meeting any of the accounting and transparency standards imposed on all American companies.

Paulson agrees we should “press” for those reforms, but not to the point of penalizing Chinese firms for refusing to comply. His rationale: “It is simply contrary to the foundations of successful capitalism for politicians and bureaucrats to instruct private American players how to deploy private capital for private ends.”

Yet, he fails to address the reality that Chinese companies, to one degree or another, are all subject to the control of the government ruled by the Chinese Communist Party and its strategic policies under Beijing’s system of “state capitalism.”

Not only do regime-connected Chinese entities compete in U.S. markets to the disadvantage of private American companies; they directly contribute to the security challenge China poses to the United States. Chinese companies generate wealth by engaging in the business of producing sophisticated weapons systems to be used in a future war against America, its allies and security partners such as Taiwan.

But Paulson sees an ulterior motive among those who oppose forcing U.S. pension funds to invest the retirement accounts of government employees and military personnel in Chinese companies: “Decoupling China from U.S. markets in this way would, of course, harm China. And perhaps that is the intent of those who advocate this idea.”

Paulson, like Kissinger, continues to ignore the multidimensional nature of China’s undeclared cold war against the United States and the West. For example, a U.S. Senate panel recently criticized U.S. science agencies for failing to respond to the threat posed by China’s talent-recruitment programs. Beijing’s involvement has allowed China to divert U.S. government funds and private-sector technology to advance its military and economic goals.

Lenin and Stalin had their “useful idiots” in the West. Mao Zedong, and his successors up to and including Xi Jinping, have what might be called their useful geniuses.

What distinguishes the Trump administration from its predecessors is the recognition that decades of U.S. engagement with China, in the hope it would become a responsible world power, have utterly failed. Beijing’s hostility toward the West, including Taiwan, and its increasingly oppressive policies against Uighurs, Tibetans and Hong Kongers, mandate a new and very different approach. Despite the protestations of the distinguished two Henrys, the Trump administration is on that course.