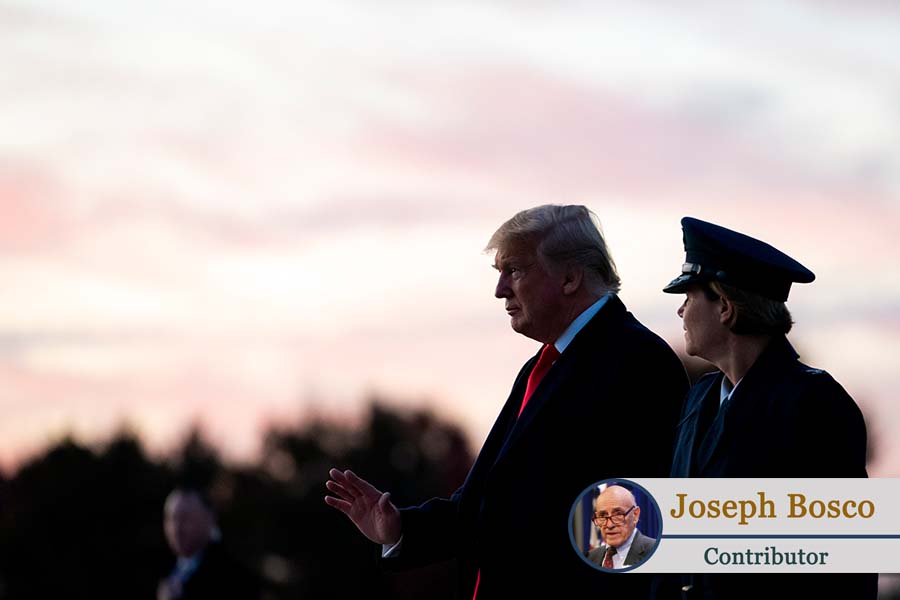 ◎ The course of action Trump chooses will have broad implications for the future of U.S.-China relations, and for the security and confidence of Taiwan.

President Donald Trump’s latest declaration on the Hong Kong protests seeks to reconcile his earlier conflicting statements. In June, he said Hong Kong, as part of China, is an internal matter for those parties to resolve.

In August, he recognized that Hong Kong is also an international human rights concern and called on Xi Jinping to “do the right thing.” He said Beijing’s handling of it would affect progress on the trade talks if China “works humanely with Hong Kong first.”

Last week, both houses of Congress — the Senate unanimously and the House with all but one vote — approved the Hong Kong Human Rights and Democracy Act, which would impose sanctions against officials who violate human rights in Hong Kong and could remove the territory’s special trade and financial status.

Predictably, Beijing strongly condemned Washington’s latest “interference in China’s internal affairs” and encouragement of political turmoil. But, since Chinese spokespersons have been alleging an American “black hand” virtually from the outset of the protests, the heavy-handed tactics finally have provoked a serious Western response. Congress might well have reasoned that if the United States will be accused of intervening anyway, we might as well do some good in the meantime.

On Friday, the president was asked whether he would sign or veto the legislation. His answer reflected the competing considerations he suggested he is weighing: human rights and support for democracy versus the need to negotiate an acceptable trade agreement with China.

It suggested a possible reversal of his earlier position that the Hong Kong outcome took priority over a trade deal. Now, he was cautioning that the U.S. position on Hong Kong should not be allowed to interfere with a good trade outcome.

But Trump hinted at a slightly different line of reasoning when he took credit for the Chinese government’s restraint so far in avoiding a Tiananmen-like massacre: “The only reason he’s not going in is because I’m saying it’s going to affect our trade deal.”

In the president’s mind, and possibly Xi’s, China might be seen as already having done its part on Hong Kong to facilitate the trade talks. Now, that argument might go, Washington must be prudent by not exacerbating the situation, which the Hong Kong Act could do by encouraging the protesters to persevere.

Yet, the absence of machine-gun fire and tanks in the streets is a very low hurdle to pass in judging official restraint. Police beatings with batons and metal rods, stomping downed protestors’ heads, shootings with beanbags and rubber bullets, spraying with toxic gases, and choke-holds, manhandling and bundling young people into police vans hardly qualify as “humane” treatment. The number of students loaded into trains and vans and incarcerated in unknown locations is now in the thousands, approaching the death and casualty figures for June 4, 1989. There have been reports of torture and “suicides.”

The fact that Chinese Communist brutality has not been even worse and more public hardly constitutes “doing the right thing” as Trump requested of Xi. Concessions to the student demands for release of detainees, police accountability, and guarantee of universal suffrage would have calmed the situation and would have been consistent with Beijing’s original “one country, two systems” promise. Xi’s failure to ensure that result provides more than enough reason to justify Trump signing the Hong Kong Act.

If China were to respond by indeed unleashing its army against Hong Kong, Trump should make clear that would immediately trigger the punitive actions provided in the act and would trigger severe international repercussions against China across the board. Along with the concentration camps in East Turkestan/Xinjiang, it would make Communist China the pariah regime it should have been after the Tiananmen Square massacre.

Far from weakening the U.S. position in the trade talks, where China needs a deal more than the United States, it would demonstrate an indomitable American will that Beijing has not previously encountered and which it must now accept in all its dealings.

The president has several options vis-à-vis the legislation, ranging from pro-Hong Kong to pro- Beijing actions. Trump could:

The course of action Trump chooses will have broad implications for the future of U.S.-China relations, and for the security and confidence of Taiwan, which Beijing also claims as part of China under the one country, two systems formula.

For Xi and China, it is an existential political moment, equal to the economic challenge Trump has created with his demand for internal structural reform and trade reciprocity. If the president does not shrink from pressing America’s and the West’s advantage in both confrontations, China will finally be on the way to true integration into Richard Nixon’s “family of nations” and Trump will find himself presiding over a historic moment every bit as monumental and positive for the world as Ronald Reagan’s success in ending the Cold War.

If President Trump joins with a virtually unanimous Congress in standing with Hong Kong, it will send a powerful message to America’s adversaries that domestic political rancor will not tie America’s hands in the global struggle between freedom and tyranny.