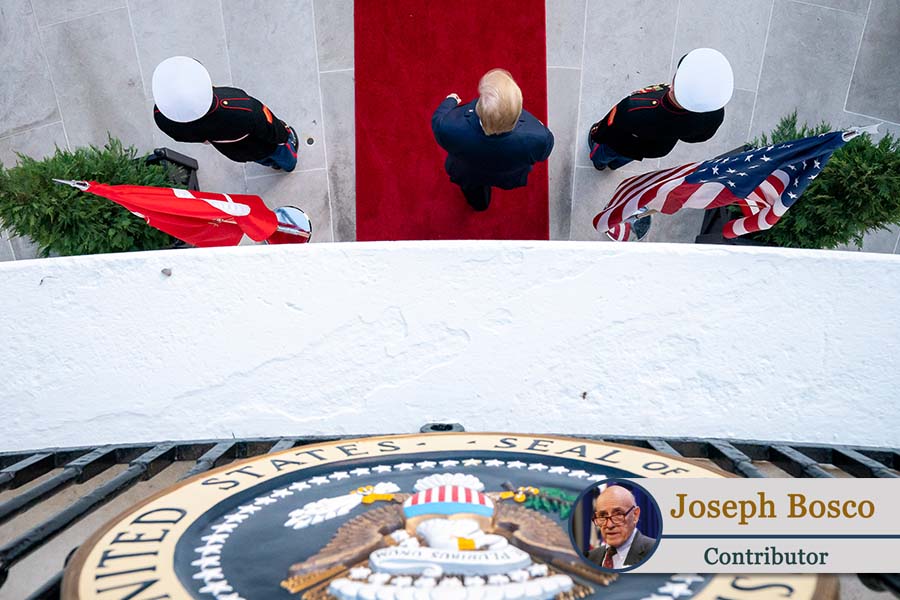 ◎ Whatever else happens in and to his presidency, a historic positive legacy awaits Trump if he re-grasps the opportunity he alone created.

Like no other American president since and including Richard Nixon, Donald Trump has taken bold initiatives to put Communist China and North Korea on the strategic defensive.

Trump insisted during his campaign that both China’s trade and economic offensive against the West and North Korea’s nuclear weapons program were long-festering threats that earlier administrations were too gullible or too timid to challenge. He said the solutions would be “very easy” and he would accomplish them “very fast.”

And he did it with a dramatic months-long condemnation of North Korea’s misgovernance and human rights violations that strongly implied the possibility of regime change in Pyongyang.  (Notably, he did not deploy that third weapon against Xi Jinping’s rule.)

For over a year, the hard-line Trump strategy seemed to be working. Both Xi and Kim Jong Un hastened to the negotiating table and to a series of high-profile summit meetings with Trump to preempt his taking even stronger measures in pursuance of his ambitious policy goals.

The president then quickly pivoted to a virtual love-fest with both communist leaders, cultivating personal relationships that he was confident would lead to policy breakthroughs in both Beijing and Pyongyang.

But Xi and Kim were using the summits and frequent high-level exchanges with Trump to gain time, to see how American politics would affect his power, and to take his measure. At their own summit in Beijing last year, they seem to have reached a strategic conclusion. They could play along with his bosom-buddy form of diplomacy without having to make substantive concessions: no fundamental structural change in China’s economy and no serious progress toward North Korean denuclearization.

They reverted to the traditional communist negotiating tactics — demand, delay, deceive, distract — while yielding very little to meet America’s policy objectives. Now, both regimes have pretty much discarded the false camaraderie they posed to cajole Trump into making his own concessions on trade (postponement of additional tariffs, reprieves for ZTE and Huawei) and on North Korea (suspension of military exercises with South Korea).

Xi has said there is no way Beijing will adopt the sweeping economic reforms Trump seeks as a condition for ending tariffs and defusing the trade war because, as Xi accurately notes, China’s communist system depends on those market distortions. Kim goes even further, rejecting Trump’s proposal for a fourth one-on-one meeting that he says “gives us nothing” and merely “gifts the U.S. president with something he can boast of.”

Both leaders apparently believe Trump is now on the psychological defensive because he has the pressure of a political campaign next year and the political/legal danger of impeachment.

Kim, with Xi’s collusion or at least concurrence, has even given the president an ultimatum: Lift sanctions in the next six weeks, or find yourself back in the days of pre-apocalyptic confrontation. The threat is an insulting rebuff to the American president and should be met with a firm substantive response.

Trump needs to acknowledge that the diplomatic love affair he thought he had with the two leaders was a mirage and the only thing that will get them to budge is the same thing that worked in the first stage of their relations with him: a campaign of no-nonsense maximum pressure in all its dimensions.

He should immediately roll back all the concessions and gestures of good faith he has made to Xi and Kim, expand tariffs and sanctions, resume joint exercises with South Korea, and crack down on ZTE and Huawei. He should make clear that resumption of North Korean nuclear and/or missile testing would present a clear and present danger to America and its allies and will require a forceful response.

The president also should immediately undertake two powerful but non-kinetic courses of action, one that has been readily available for American administrations but ignored for decades, and the other a measure that only recently has come under consideration.

For both China and North Korea, Trump should launch a Reagan-like strategic communications campaign to get the truth about their own countries and about the outside world to those heavily-propagandized populations. The moral force that helped bring down the Berlin Wall is the least this generation of the Free World can offer the people of Hong Kong and those trapped in Tibet and East Turkestan/Xinjiang.

Specifically for China, the president can direct his Treasury Department to block any participation in the U.S. securities markets by Chinese companies that don’t meet the same transparency and accounting standards imposed on all American entities. That will protect American investors, retirees and military personnel from being forced to finance Communist Chinese products used to oppress the Chinese people and weapons that threaten the United States, its allies and security partners or others in the region.

These measures will hasten the demise of two of the world’s most oppressive and dangerous regimes.

Whatever else happens in and to his presidency, a historic positive legacy awaits Trump if he re-grasps the opportunity he alone created.