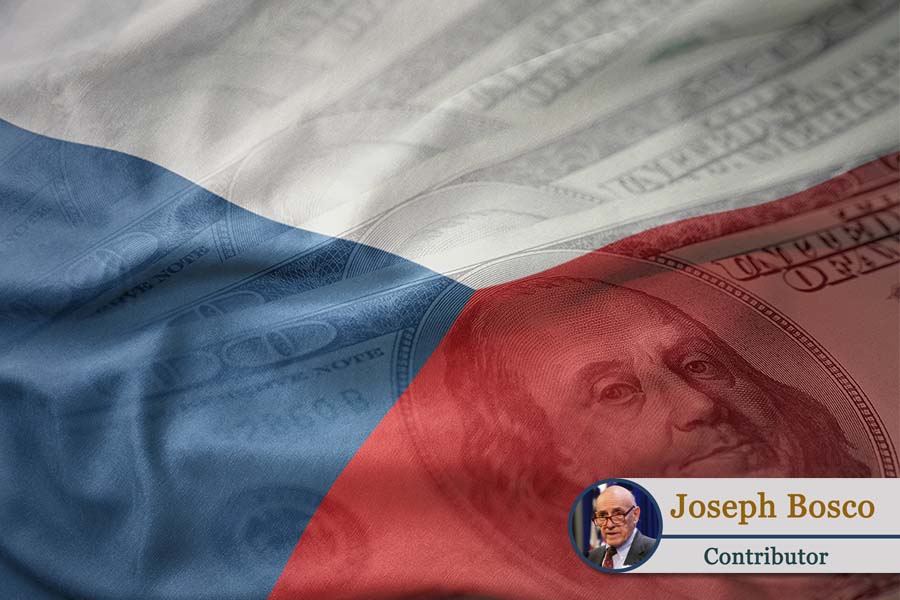 ◎ There are things the Czechs themselves still can do to teach China that it doesn’t hold all the cards.

Vaclav Havel, the brilliant playwright, heroic political dissident, and visionary first president of liberated Czechoslovakia, consistently emphasized the moral element in international relations. They were lessons he had learned from his country’s painful history of invasion and occupation first by Nazi Germany, then by the Soviet Union.

On Feb. 22, 1990,  he delivered an address to the United States Congress, which I was privileged to attend. He talked of the competing pressures, especially economic ones, that impede people and governments from doing the right thing, such as resisting tyranny: “Interests of all kinds — personal, selfish, state, nation, group and, if you like, company interests — still considerably outweigh genuinely common and global interests.”

His countrymen still wrestle with the moral quandary he described, and many, if not all, carry on the noble example he set. As National Public Radio (NPR) has reported, glorious Prague, the “City of 100 Spires,” presently is grappling with just such a moral challenge, this time from the People’s Republic of China.

When he was president, Havel, having lived through the brutality of Soviet Communism, was no admirer of the Chinese Communist system. He proudly supported those he considered moral and political soulmates: the Dalai Lama and Chinese dissidents, which earned him no credits in Beijing.

However, Milos Zeman, a populist new president who took office in 2013, easily succumbed to the lure of the economic opportunities Beijing offered and entered into a series of agreements with China. According to NPR, he envisioned the Czech Republic as “China’s gateway to Europe” and invited Xi Jinping for a state visit in 2016.

During that visit, Prague was named a “sister city” to Beijing and the agreement contained a provision endorsing the One China principle asserting that Taiwan is part of China. But, over the next few years, major projects failed under fraudulent management practices and relations with China began to sour.

Martin Hala, a China expert at Prague’s historic Charles University, told NPR: “There’s been this backlash building up slowly. People really feel cheated. A lot of things that have been happening in relation to China have been driven by local actors.”

A new mayor,  Zdenek Hrib, who once worked as a medical intern in Taiwan, demonstrated the professor’s point about local activism. On taking office, he immediately questioned the appropriateness of Prague’s involvement in the China-Taiwan dispute: “A sister-city agreement should not include things that are not related to the cities’ relationship.”

At a city assembly meeting, the mayor was accused by one member of meddling in the business of the Ministry of Foreign Affairs, who said: “Here you are, pulling Prague into a matter of such importance.”

Before the city government could vote to excise the anti-Taiwan language from the sister-city agreement, Beijing canceled it. For good measure, it also withdrew its permission for a 12-city visit to China by the Prague Philharmonic Orchestra, which had spent two-and-a-half years preparing for it in what its director called  “the biggest project we’ve ever had.”

Cancellation of the tour was a $200,000 loss for the orchestra, on top of the millions of dollars Prague already had lost from fraudulent transactions by Chinese entities when relations were good between Beijing and Prague.

Mayor Hrib told NPR the city was learning lessons about China: “It was quite obvious that the only thing that the Beijing side was focused on was their propaganda, and not the political or cultural exchange we were interested in.” He also said he “felt very badly; we have to do something because people are suffering from this.”

Given its past practices, Beijing is likely to impose additional punishment on Prague and the Czech Republic, both known for their “fortitude” under the Nazi and Soviet ordeals. The country’s president has tried to forestall further Chinese retaliation by appealing to Xi and distancing his office from the city’s action.

But, as the professor told NPR in defense of the mayor’s action, “There is a reason for the backlash, why the mayor has stood up. People have to.”

The question is what other local and national governments in Europe, and elsewhere, will do in the face of China’s economic and ideological onslaught — and whether they can manage to organize a collective response that will increase the strength of the individual.

If, for example, other musical ventures and performers would cancel their tours of China in artistic comradeship with Prague’s Philharmonic, Beijing may not find its heavy-handed retribution so useful or so welcome to the Chinese people. The example of the National Basketball Association and a host of major American companies is certainly not inspiring. It is time to turn Beijing’s instruments of intimidation against it through cultural, as well as economic, disentanglement until China gets the message of how civilized nations behave.

Within days of the NPR report, the Eastman Philharmonic Orchestra at the University of Rochester cancelled its own tour of China because Beijing denied visas to the South Korean members. The Orchestra previously had decided to make the tour without the Koreans, but better judgment and sounder ethics prevailed.

There are things the Czechs themselves still can do to teach China that it doesn’t hold all the cards, that retaliation can be a two-edged sword. Democratic Prague might wish to explore a sister-city relationship with democratic Taipei, with shared values that are deeper and more durable than the economic relations with Beijing proved to be. And, if China chooses to punish the Czechs even more severely, their national leaders, heirs to the Havel legacy, may decide that democratic Taiwan is a better long-term partner than Communist China. Other countries under pressure from Beijing may find it an example to follow.