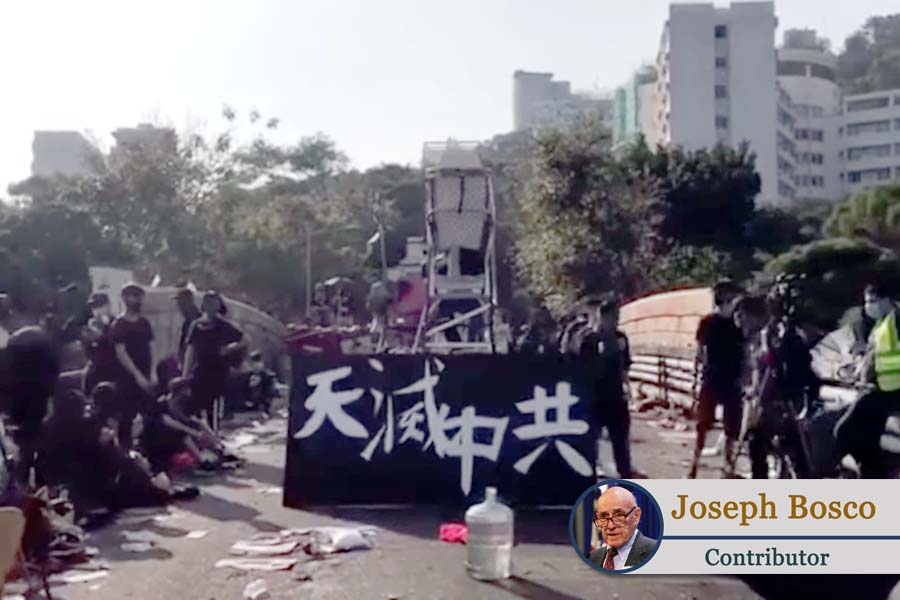 This past week marked the 30th anniversary of the fall of the Berlin Wall, the end of communism in Eastern Europe and, a couple of years later, the demise of the Soviet Union. While the Free World and those imprisoned behind the Iron Curtain celebrated with tears and exuberance when the wall came down in 1989, one individual was noticeably subdued at the news: the president of the United States, George H.W. Bush.

Asked in an Oval Office news conference that day why he did not seem “elated,” Bush replied, “I am not an emotional kind of guy.” In later remarks to his cabinet and staff, however, he revealed a deeper motive. He did not want any “dancing on the Wall” or “rubbing the Soviets’ noses” in their catastrophically historic defeat. Bush said his reticence came from his mother’s Yankee sense of modesty in social relations.

Five months earlier he had decorously saved the other communist power’s “face” when he downplayed the Tiananmen Square massacre, dispatching his national security adviser and deputy secretary of State to clink glasses with Chinese premier Deng Xiaoping and assure him of “business as usual” with the United States.

The men carrying out the mission of comfort to Beijing were Brent Scowcroft and Lawrence Eagleburger, two intimates of Henry Kissinger, who himself had virtually insulated Deng from international condemnation by declaring that no national leader would have tolerated the occupation of a capital city’s public square.

So, whether it was a communist “victory” or defeat, the constant theme of U.S. policy was to indulge the feelings of the oppressors’ leaders, not those of the liberated Eastern Europeans or the students and workers in China. As Bush’s secretary of State, James Baker, put it, we strived “not to be braggadocio or triumphalist in our comments. We still had a lot of work to do with the Soviet leaders.”

Yet, President Ronald Reagan, whose straightforward policies had helped start the peaceful Soviet unraveling in the first place, managed to eschew “braggadocio” when he talked about a “great wave of democracy sweeping the world.” Nor did he sound “triumphalist” when he said matter-of-factly that communism had been tried for several decades and, put simply, “It didn’t work.”

The Reagan-Kissinger divide on U.S. foreign policy dramatically erupted in 1976 when Reagan challenged President Gerald Ford for the Republican nomination, primarily because of Kissinger’s espousal of detente with the Soviet Union at the expense of concern for human rights and democracy.

Kissinger had persuaded Ford not to invite visiting Soviet dissident Alexander Solzhenitsyn to the White House in 1975 for fear of offending Moscow. Five years earlier, a Lithuanian sailor jumped from a Soviet trawler onto a U.S. Coast Guard cutter off Cape Cod and tried to defect.  Kissinger, then President Richard Nixon’s national security adviser, was reported to have directed that he be returned to the Soviets, who proceeded to drag him from the cutter and beat him into submission.

These historical incidents have their resonance today in the constant tension between prudence (or “accommodation”) and assertive morality (or “provocation”). Vice President Mike Pence and Secretary of State Mike Pompeo have made recent speeches focusing on Communist China’s multidimensional challenge to the West, including its egregious violations of universal human rights in East Turkestan/Xinjiang and Hong Kong.

But President Donald Trump has tried to soften his administration’s tone on both issues so as not to jeopardize prospects for a trade deal and Chinese cooperation on North Korean denuclearization. (On the latter security objective, Trump also has abandoned his earlier attention to Kim Jong Un’s criminal treatment of his own people, which seemed to suggest the need for regime change and contributed to Kim’s initial willingness to negotiate.)

While saving an adversary’s face sometimes can facilitate a relatively peaceful way out of a confrontational situation with a normal state, that civilized approach does not necessarily work when dealing with the face of evil.

Bush could argue then that low-key strategic patience enabled the peaceful demise of the Soviet system — but it is doubtful it would have happened without the previous years of internal and external pressure on what Reagan unapologetically called the “Evil Empire.”

Similarly, Trump’s demands for structural economic change in China, if actually implemented by Beijing, could finally bring the accompanying political reforms that were supposed to occur when the West allowed it to join the World Trade Organization.

That would be more likely if accompanied by a sustained information campaign to the Chinese people. The combined efforts — while maintaining a security shield on Taiwan and the South and East China Seas — could enable a relatively peaceful transition for the communist regime.  It would help if Trump could emulate Reagan and demand: “Mister Xi, tear down those concentration camps and stop the Hong Kong crackdown.”