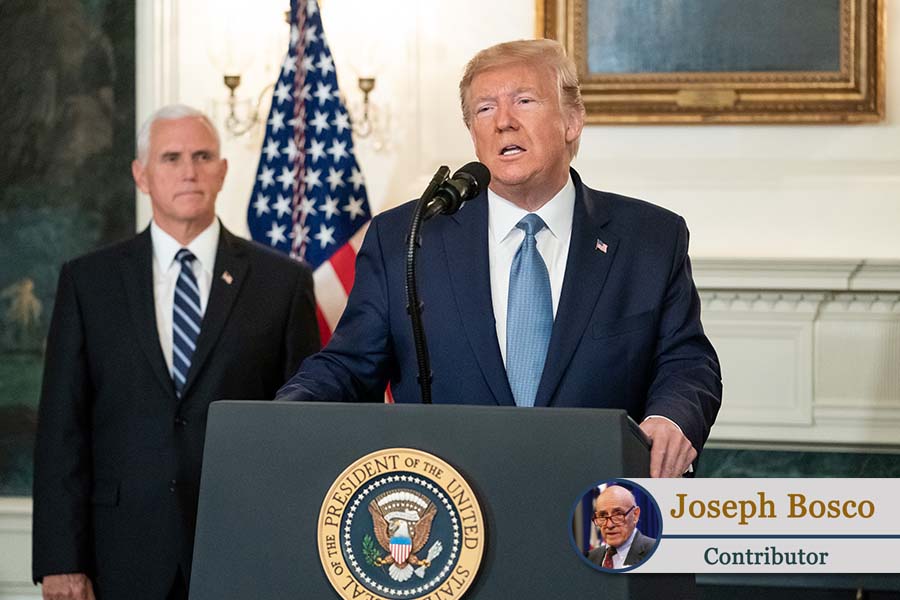 President Donald Trump’s guiding principle in United States-China relations is expressed by one of his favorite words: “reciprocal.” He also loves the noun form, “reciprocity,” and says there was “far too little” of it until he got to the White House.

The president has most prominently and effectively applied his operating philosophy in the area of trade. Sometimes, as he said, reciprocity means “they do it, so we do it”; other times it is necessarily asymmetrical, rather than pure tit-for-tat. We don’t respond to intellectual property theft, for example, by stealing China’s trade secrets and technological know-how. Instead, tariffs serve nicely to punish China’s malign behavior and potentially deter future offenses.

This week, the Trump administration extended its reciprocity doctrine to the realm of diplomacy. The State Department announced that, henceforth, the United States would not be as generous and open-handed as it has been in allowing the free movement of Chinese officials in this country. Now, Chinese diplomats must notify the State Department before they engage in contacts with representatives of state, local and municipal governments as well as visits to public and private educational and research institutions, including national laboratories in the U.S. and its territories.

State Department officials say the change is made to reciprocate for similar rules that U.S. diplomats face in China. But Washington’s new rules are still less onerous than China’s, which require not only notification but prior approval. (This is analogous to the exchange between Trump and Xi Jinping after the U.S. president held a telephone conversation with Taiwan’s President Tsai Ing-wen. Xi wanted veto power over any future such call, but the president agreed only to notify him before talking with Tsai again.)

So, for now, Washington is applying partial reciprocity on the matter of Chinese diplomats’ movements in the U.S., with the hope that China will relax its rules to allow greater access for Americans in China.

However, unless the U.S. imposes total reciprocity and tightens its own rules further, it will not solve the problem the FBI has warned about: massive intellectual property theft by Chinese researchers in this country, particularly at universities. But it is a modest step in the right direction.

A related State Department decision a few days earlier reflected an asymmetrical use of sanctions to achieve a human rights objective. Secretary Mike Pompeo announced that his department would deny visas to Chinese officials implicated in the repression and criminal treatment of the Uighur population in East Turkestan/Xinjiang.

A critical area where the United States is very far from reciprocity with China is in strategic communications and the information side of the bilateral competition. Beijing conducts extensive influence operations against Taiwan, the United States and other Western democracies, taking full advantage of our open societies and support for the free flow of ideas. It also uses that vast access to present a distorted picture of America and the West to its own population and to the rest of the world.

China systematically operates radio and television stations in this country, purchases space in American media, distributes English-language newspapers, and pays to run its own supplements in leading U.S. papers such as the New York Times and the Washington Post.

Government-controlled China Central Television operates a state-of-the-art broadcast bureau in Washington as part of a recent major overseas expansion aimed at boosting China’s international influence. CCTV America produces news programs in English for an American audience. At the same time, it transmits back to the Chinese people Beijing’s official version of news and information from and about the United States.

China’s official Xinhua News Agency has expanded its overseas television operations. Known as CNC, the station broadcasts Chinese and English-language channels to more than 60 countries in the West and Asia. The Associated Press in Beijing reports that “[t]he expansion aims to counter negative images of China, especially over issues such as human rights, one-party communist rule, and China’s policies in the restive western regions of Xinjiang and Tibet.”

By contrast, the United States has significantly cut back on its dissemination of news and information to Asia. The former Broadcasting Board of Governors, charged with managing and overseeing all U.S. civilian international broadcasting, reduced its radio transmissions to China and Tibet as well as Burma, Laos and Vietnam. It eliminated scores of personnel directly or indirectly involved in local language broadcasts to those countries.

This is a far cry from the Cold War period when the United States Information Agency ensured that America demonstrated its values by promulgating factual information and varied viewpoints to people trapped in repressive authoritarian societies with messages of truth and hope. Human rights heroes Vaclav Havel, Lech Walesa and Natan Sharansky all told of how the Voice of America and Radio Free Europe sustained them in their prison cells. Today, VOA and Radio Free Asia are severely constrained by both resources and timid U.S. policies from challenging China with the truth, the West’s greatest weapon against tyranny.

With 100,000 local protests a year, China spends more on internal security than on its military because it fears its own people more than any imagined external invader. It does not want the Chinese people to know what is happening in Hong Kong, or what it is doing to its Muslim population in western China. A revived and vigorous Western information campaign would achieve a measure of informational reciprocity, exploit this Chinese Communist vulnerability, and avoid a disastrous shooting war.

In so doing, the West would turn the strategic tables and achieve the ultimate success advocated both by the ancient Chinese strategist, Sun Tzu, and today’s Chinese Communists: winning without fighting. It was the way Ronald Reagan and the United States won the first Cold War.