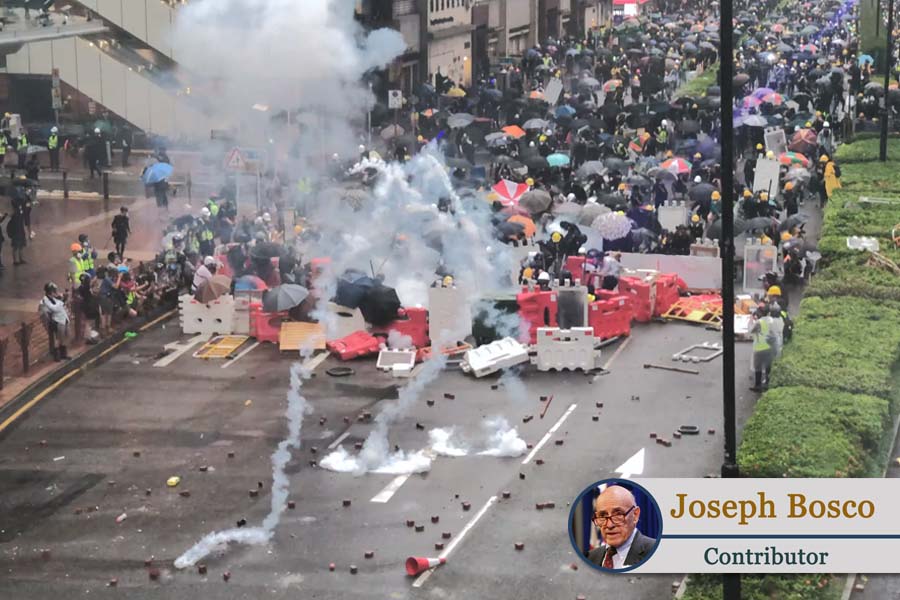 One Country, Two Systems Did Not Work for America — It Won’t Work for China

◎ China’s communist leaders know that freedom, democracy and the rule of law are political contagions that could infect the vast Chinese population.

This week, as they do every year, students across the nation observed Constitution Day and Citizenship Day — at least they are supposed to, pursuant to a congressional act in 2004.

The objective is to ensure that America’s young people acquire at least a rudimentary knowledge of the nation’s origins, its values and founding principles, as well as its initial failure fully to live up to those values and principles.

They will be educated that the Constitution was intended to establish a system of government informed by the revolutionary concept stated in the Declaration of Independence, that “all men are created equal and are endowed by their Creator with certain unalienable rights …  life, liberty and the pursuit of happiness.”

Yet, they also learn that women were denied the right to vote for the next century and a half, and that people dragged from Africa in chains were denied their God-given rights to life, liberty and the pursuit of happiness. They were slaves, owned like property by other human beings, and slavery was allowed to flourish as an institution in the southern half of the country for the next eight decades.

But, as Abraham Lincoln declared in 1858, the nation could not go on living half-slave and half-free: “A house divided against itself cannot stand.” It took a calamitous Civil War to resolve the internal conflict in favor of the unity of the nation based on human freedom. Three amendments to the Constitution and several acts of Congress and decisions of the Supreme Court also were required to flesh out that moral mandate.

Though the time and circumstances China faces today are quite different from those Americans have grappled with over the past two centuries, the core issue presented by “one country, two systems” is the same: Can a nation endure while it embraces two contrasting sets of values?

The tumult in Hong Kong is an existential moment for that proposition. Hong Kong’s Basic Law was drafted as part of the Sino-British Joint Declaration covering Hong Kong after its handover to China on July 1, 1997. The declaration stated that Hong Kong would be governed under the principle of “one country, two systems” and continue to enjoy its capitalist system and individual freedoms for 50 years after the handover. That meant that the 7 million people of Hong Kong would be an island of relative freedom within a nation of a billion Chinese denied those same rights and liberties. And the same status presumably would apply eventually to the 23 million people of Taiwan.

But China’s Communist Party decided early on that Lincoln was right about the incompatibility of two competing value systems, and they carried his principle to the nth degree: A nation cannot live 99.9 percent slave and 0.1 percent free. That one-tenth of 1 percent of relatively free Chinese would have to be brought to heel, and the elimination of those rare and special freedoms in any part of China could not wait until 2047.

So Beijing began a methodical campaign to erode the political rights Hong Kongers were promised under the Basic Law, starting with the direct election of the territory’s government.  Most recently, it tried to impose an extradition law that would subject Hong Kong citizens to the authoritarian prosecutorial and judicial system of mainland China, triggering three months of ongoing public protests.

China’s communist leaders know that freedom, democracy and the rule of law are political contagions that could infect the vast Chinese population — Tibetans, Uighurs, Falun Gong, Christians aspire to the same “unalienable rights” that the people of Hong Kong and Taiwan are determined to preserve for themselves. They saw in 1989 that the vast Chinese population harbors the same subversive impulses, so they mean to crush it anywhere it appears in the People’s Republic.

The question Xi Jinping and his communist comrades must face is whether the clash of value systems will end with another Chinese civil war rivaling America’s titanic struggle if they continue to resist the inextinguishable urge for freedom, or with a premeditated evolutionary plan that will bring China to a system of peaceful political reform.