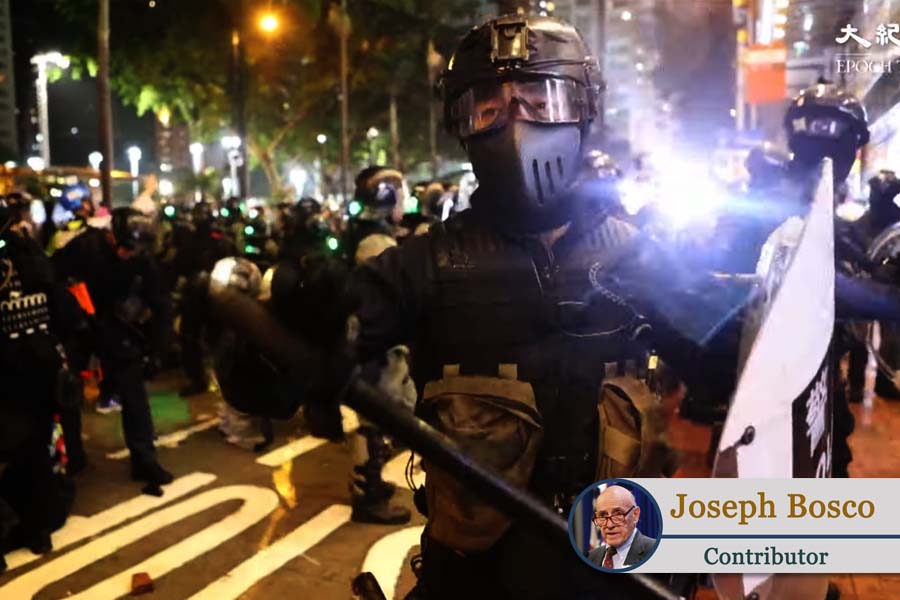 Moment of Truth for Hong Kong — and For China

◎ The Hong Kong crisis has expanded into a campaign in the information warfare conducted by China against the West.

The Hong Kong crisis is no longer simply a confrontation between pro-democracy protesters and the communist government in China and its subservient local administration. It has expanded into a campaign in the information warfare conducted by China against the West.

Beijing once again has accused the United States and other democratic countries of interfering in Hong Kong’s affairs, and thus in China’s, and fomenting the disturbances that have rocked the territory for more than three months.

The protests actually were triggered by the Hong Kong government’s attempt to adopt extradition legislation that would have sent its accused citizens to China for legal prosecution.  This occurred after years of Beijing’s reneging on the political freedoms enjoyed by Hong Kong under the “one country, two systems” formula guaranteed by the Basic Law of 1984.

The extent and intensity of the demonstrations escalated after the police used harsh measures to suppress the protesters and Hong Kong’s chief executive refused to withdraw the bill or meet the other demands for an investigation of police tactics, detainee releases, and universal suffrage. (No one knows what form of torture is being inflicted on the arrested protesters in dark cells at the hands of police who were willing to break hands, arms and legs before cameras in broad daylight.)

Beijing almost immediately began blaming a U.S. “black hand” for instigating the demonstrations, despite official U.S. government denials of involvement. At one point, Beijing even identified U.S. Embassy personnel and released personal information about them, causing the State Department to issue a strong protest about what it described as “dangerous” Chinese behavior.

But China’s renewal of its false claims now constitutes a challenge to the diplomatic integrity and credibility of the United States and other governments — and a test of Beijing’s success at blatant disinformation. That is so whether China’s complaints and accusations derive from genuine paranoia on the part of an insecure dictatorship, or from clever posturing to keep the West on the defensive.

In either case, it requires an appropriately firm response from Washington. The State Department should declare that Beijing’s persistence in falsely blaming the United States and other Western countries for the communist regime’s own governance failures is unacceptable. It should state that, henceforth, Washington will abandon its prior official reticence — despite protesters’ appeals for support — and now indeed will adopt a more active role.

The new proactive stance would mean immediately commencing an information campaign directed at the Chinese people — including Tibetans, Uighurs and Mongolians — to counter Beijing’s suppression of the truth about what is happening in Hong Kong.

Further, Washington should state that it will ask Britain, Canada, France, Germany, Italy and Japan — which Beijing also has accused of “harboring ulterior motives” and interfering in Hong Kong — to join in this international truth-telling effort.

The democratic countries, led by the United States, would thus finally be in the position of mounting a sustained response to the People’s Republic of China’s extensive disinformation campaign against the West on a range of international issues.

It will prove to be an important test of the democracies’ will and ability to meet the information challenge head-on and, if effective, it would be a game-changer in the war of ideas with Communist China. It would finally get the West off its back foot by confronting Beijing’s “win without fighting” strategy of undermining U.S. and Western interests and values.

Since China constantly accuses the West of interfering in its internal affairs whenever international rules and norms are invoked, some overt non-kinetic interference is long overdue. As the old political saw goes, we’ll stop telling the truth about Communist China when it stops telling lies about the West.

Finally, the United States should advise Beijing that any substantial use of force against Hong Kong by the People’s Liberation Army, the People’s Armed Police, or the regular police force, will trigger an immediate termination of the territory’s special status under the United States-Hong Kong Policy Act of 1992.

That would deprive Beijing of the immense economic benefits it derives from Hong Kong’s privileged place as a safe, reliable international banking center, unlike every other Chinese city. Again, reciprocity and honoring commitments should be the watchwords of American policy toward China. Hong Kong’s moment of truth must mean getting the truth into China.