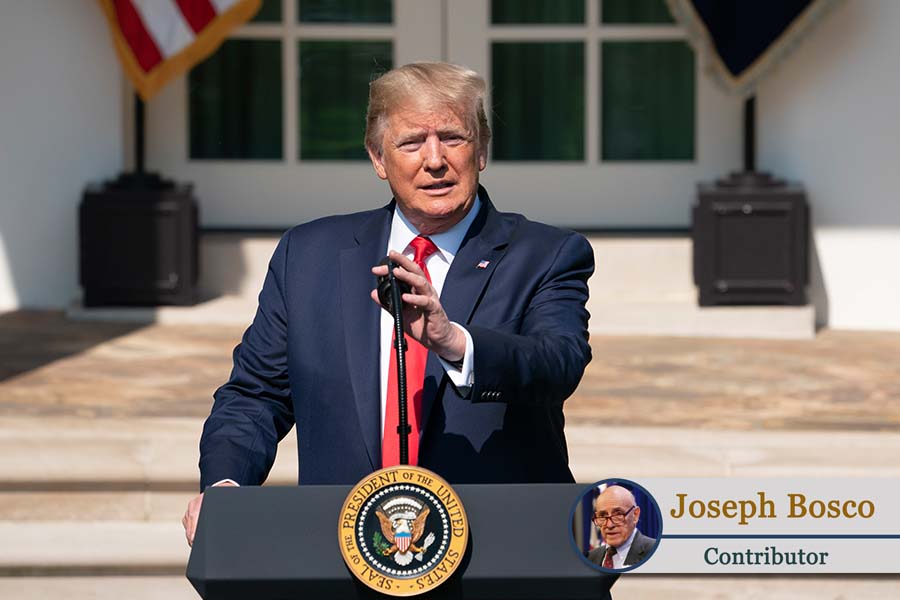 ◎ The most effective and underutilized weapon in the West’s arsenal is the truth.

Donald Trump does not see China as an enemy, according to an outside consultant who advises the president on how to think about China and prides himself on having “restrained” him from taking several actions that would displease Beijing.

The “China-is-not-an-enemy” refrain mirrors an urgent public plea to Trump from more than 100 China observers who consider this administration’s more confrontational approach as misguided and dangerous. This latest rhetorical assurance should provide some cheer.

Their open letter triggered a response from at least as many national security practitioners who contend that wrong-headed and naive China policies of previous administrations created the perilous situation the West now confronts. (I joined in signing that letter.)

For four decades, whatever malign behavior China was guilty of on trade, intellectual property theft, proliferation, human rights, Taiwan, aggression in the East and South China Seas and complicity in North Korea’s nuclear and missile programs — the advocates of open-ended engagement warned that “treating China as an enemy will make it an enemy.”

In fact, generous U.S. engagement policies took precisely the opposite approach, treating China as a strategic partner, an aspiring responsible stakeholder, and even as America’s good-faith geo-strategic colleague. (One high Obama administration official consistently referred to Beijing’s communist interlocutors as “our Chinese friends.”)

Yet, the China we face today is, at its core, the same resentful, hostile, oppressive communist regime that Richard Nixon thought he could change by “opening China to the world and opening the world to China” — except that now it is exponentially more powerful and menacing in every military, diplomatic and economic dimension.

Nixon thought engagement would help “detoxify the poison of Mao Zedong’s thought.” But it was embedded in the Chinese Communist Party DNA, which should have been evident in the advice to comrades even from Mao’s supposedly enlightened successor, Deng Xiaoping: “Hide your capabilities (and intentions); bide your time.”

Deng demonstrated his own Maoist instincts when he ordered the massacre of Chinese citizens in Tiananmen Square. Now, Xi Jinping finds this the right time to revive Maoism in both domestic and international areas, rooted in the concept that “political power grows out of the barrel of a gun.” He is applying that doctrine to Uighurs, Tibetans, Taiwanese, Falun Gong, Christians and dissidents, including the freedom-loving people of Hong Kong.

The intellectual debate over whether the United States sees China as an enemy is overwhelmed by the brutal reality that China’s Communist Party sees itself as America’s enemy, and always has.

While Washington has no intention of initiating military conflict to address China’s multiple expanding threats, the most effective and underutilized weapon in the West’s arsenal is the truth, sometimes known as strategic information. Reportedly, Beijing spends as much or more on internal security as it does on its military — because it fears the Chinese people more than it does any external enemy. That existential vulnerability should be exploited.

The West urgently needs a well-conceived, aggressive and sustained strategic communications program, such as we had in World War II and the Cold War, to give the Chinese people all the dangerous, subversive facts that Beijing strives mightily to keep from them — most recently, for example, the massive citizen protests in Hong Kong, and international commemoration of the Tiananmen massacre.

Such a robust and consistent truth campaign would be another indication that this administration recognizes we are in a new cold war with China, but it has been waged by only one side so far.  Some will call the approach unduly provocative, but as Secretary of State Mike Pompeo said recently: “With the indispensable support of President Ronald Reagan, a human rights revolution toppled the totalitarian regimes of the former Soviet Union.”

It was accomplished without a shooting war and it started when Reagan shocked the world with his moral condemnation of the Soviet Union as an “evil empire” and the foreign policy establishment finally let Reagan be Reagan.

A similar approach now would offer President Trump a lower-cost, lower-risk alternative than the devil’s dilemma of choosing between a new hot war or further submission to a malign communist dynasty.

Nixon’s “Red China” never changed and never went away. It is now more than four decades past time for the regime to change or to be changed by its people — with a little help from its friends.  Like the Soviet Union before it, the People’s Republic of China has reached its 70-year expiration date.

People should stop trying to prevent Trump from being Trump when it comes to dealing with China and North Korea, such as by reversing his initial sound ZTE and Huawei bans and acceding to Beijing’s pressure to ease up on North Korea. His unorthodox instincts have created more potential progress than all the sophisticated diplomacy of his predecessors. In fact, if there’s one former president who should be emulated, let Trump be Reagan, who knew an enemy when he saw one.