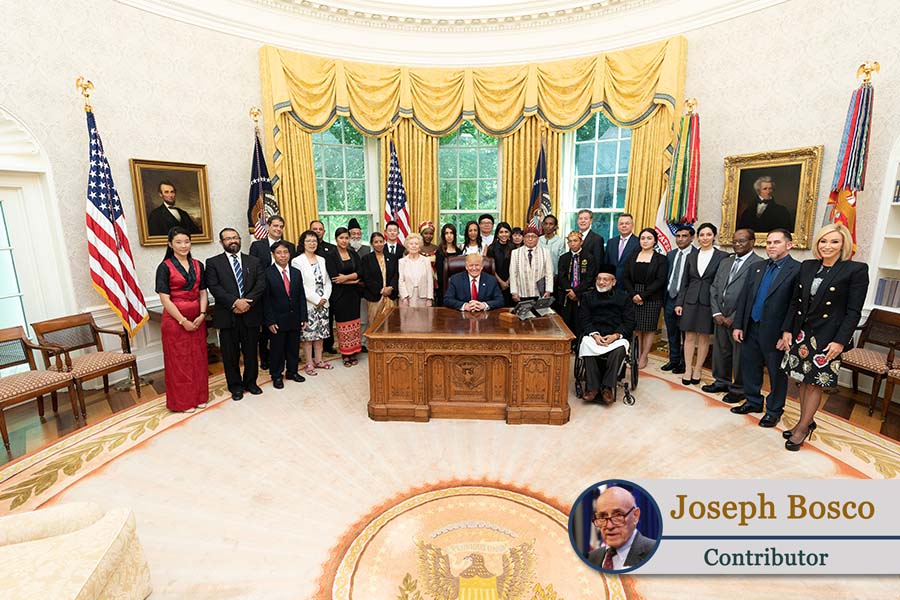 ◎ Like Reagan with the Soviet Union, Trump should launch a moral offensive against China and North Korea that will reap enormous strategic benefits as well.

To the surprise of many, President Donald Trump met in the Oval Office last week with a group of foreign victims of religious persecution.

Four of the 27 participants were from China: a Uighur Muslim, a Falun Gong practitioner, a Tibetan Buddhist and a Christian. Others were from North Korea and other countries with close China relations. A couple were from Western nations.

The meeting was held in connection with the administration’s religious freedom conference that featured addresses by Vice President Mike Pence and Secretary of State Mike Pompeo.

Contrary to the conventional wisdom that this president is not interested in human rights issues, this was far from the first time he has hosted victims of official mistreatment.

In January 2018, he welcomed to the White House a group of North Korean defectors who recounted in graphic detail the abuse they had suffered at the hands of the Kim regimes. That meeting followed Trump’s State of the Union address directing the world’s attention to the plight of a disabled North Korean escapee and recounting the horrors of life under the communist regime.

Months before, he had given separate speeches at the United Nations General Assembly and at South Korea’s National Assembly, again describing in some detail the numerous crimes against humanity perpetrated by the government in Pyongyang and explicitly questioning its legitimacy to rule.

As president-elect, Trump accepted a congratulatory telephone call from President Tsai Ing-wen of Taiwan. Since 24 million Taiwanese are under constant and growing threat from Beijing to lose their democratic rights, that president-to-president conversation also qualifies as a human rights commitment.

Cynics will argue that the U.S. president makes these gestures to human rights simply to gain leverage over North Korea and China. And, in the case of Kim Jong Un, the president’s declaratory indictment of his despotic governance did appear to be an important component of the maximum pressure campaign to persuade the regime to give up its nuclear weapons program. (The other elements were economic sanctions and the credible use of force.)

But, even if the skeptics are right and the president is acting not out of deeply-felt compassion or high-minded idealism, but for hard-headed strategic reasons, that in itself is a good thing — both for the human rights victims and for the U.S. negotiating position on trade and other issues.

In fact, given the deep vulnerability of both the Chinese and North Korean regimes to popular unrest, the lesson for not only the Trump administration but other Western governments is that emphasis on human rights is both a moral and strategic imperative.

The Soviet Union collapsed for a number of reasons, not the least of which was its moral bankruptcy before its oppressed populations, aided by an information campaign from the West.

Human rights heroes such as Czech statesman Vaclav Havel, Israeli human rights activist Natan Sharansky and Poland’s labor activist Lech Walesa all told of how messages of support from Ronald Reagan and others, transmitted by the Voice of America and Radio Free Europe, sustained their morale and encouraged their perseverance throughout their ordeals.

A well-planned, aggressive and consistent messaging campaign of truth-telling from VOA and Radio Free Asia can provide spiritual uplift for the more than a billion people enduring crushed lives in China and North Korea.

Those regimes already spend as much or more on internal security as they do in preparing to deal with external “aggressors” — or, more likely, external victims of their own aggression.

This kind of informational pressure would be a non-kinetic way of diverting the two tyrannies’ resources from dangerous external adventures. At the same time, they would be incentivized to improve the lot of their populations and to make concessions in other areas of confrontation with the West.

The cumulative effects of incremental Chinese and North Korean concessions would advance the cause of democratic change in both systems. As Xi Jinping and his colleagues are fond of telling Western governments when offering deals, it would be a win-win proposition.

Like Reagan with the Soviet Union, Trump should launch a moral offensive against China and North Korea that will reap enormous strategic benefits as well.