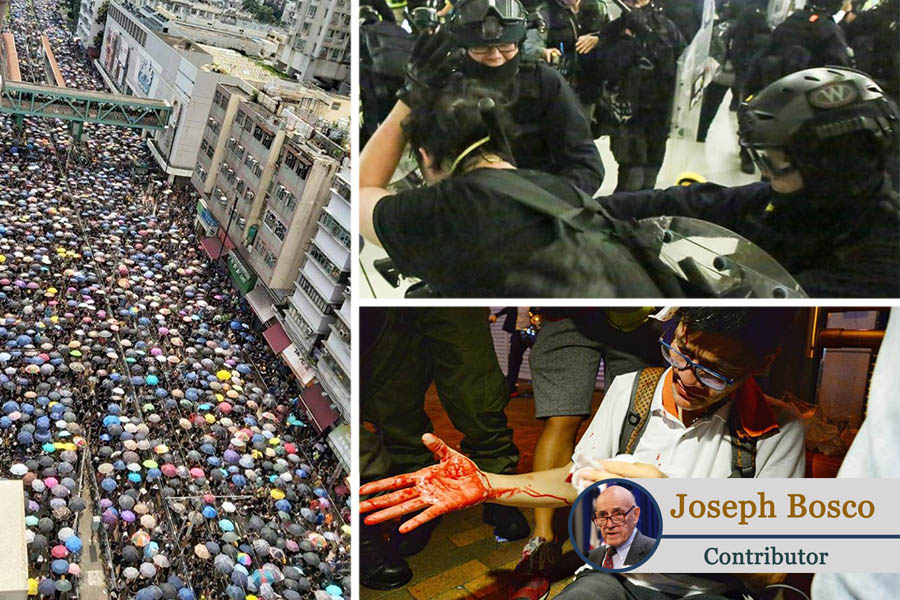 Hong Kong Protesters Show Wit and Courage; US Should, Too

◎ The people of Hong Kong are leading the way in the first major ideological confrontation of the new cold war that the People’s Republic of China has launched against the West.

The people of Hong Kong are leading the way in the first major ideological confrontation of the new cold war that the People’s Republic of China has launched against the West.

They are conducting their struggle astutely, recognizing two operating imperatives:

The Chinese government refrained from overt interference as long as the protests were confined to downtown government and police buildings, where they could derogate them as the work of local troublemakers and vandals.

At the same time, Beijing used its finely-honed instruments of information suppression to keep news of the demonstrations away from the Chinese people, just as it does with the thousands of local protests throughout China. Its greatest fear is the coalescing of myriad demonstrations into a national movement against the central communist government.

At first, the demonstrators had no way to break through the bamboo curtain of news blackout to reach the Chinese people. But they soon recognized they had a ready-made audience in the thousands of Chinese tourists who come to Hong Kong every day.

Once infected with the unofficial version of the truth, they would carry the message of the uprising back to the general Chinese populace in ways the ultimate nemesis in Beijing could not control.

They shifted the locus of the protests from the center city to the high-speed train station connecting Hong Kong to China. “We want to show tourists, including mainland China tourists what is happening in Hong Kong and we hope they can take this concept back to China,” said one student.

The Chinese authorities saw the danger and, to send a message to all train passengers, unleashed “triad” thugs, armed with sticks and metal rods, to attack the demonstrators in the Mass Transit Railway station in Yuen Long, seriously injuring many.

In a coordinated responsive action that escalated the strategic communications campaign, the demonstrations leap-frogged on Friday from rail transit facilities to Hong Kong International Airport where they could influence a broader audience of global visitors.  Flight attendants and airport staff launched an 11-hour protest against the government for tolerating, if not instigating, the violent transit attacks at the subway station. They were joined by the original downtown protesters who staged a sit-down in the airport terminal greeting airline travelers from around the world with their chants of “Free Hong Kong.”

Some students held signs in English, Japanese and Korean appealing to “international friends for help standing up to the Hong Kong government.” Others held signs with the words: “Tourist warning: do not trust the police or the government.”

The protesters have accomplished their initial purpose in bringing Hong Kong’s plight to the world’s attention. They hope it will gain international support for the cause of restoring and maintaining their political freedoms.

They also rely on world public opinion to dissuade Beijing from employing military force in Hong Kong and replicating its 1989 massacre of students and workers in Tiananmen Square and other cities.

There are disquieting signs that Chinese leaders are considering precisely those extreme measures.

The Ministry of National Defense warned that the protests were challenging China’s sovereignty over Hong Kong and said, “That absolutely cannot be tolerated.” That hint of military intervention was reinforced by reports of troop mobilization in Shenzhen, a potential launching point for an assault on Hong Kong.

The State Department had already expressed America’s “grave concern” over the extradition legislation at the root of the protests, and as the confrontations escalated, President Trump and Secretary of State Mike Pompeo issued veiled warnings to Beijing.

“The president, I think, captured it right when he said that we need China to do the right thing. We hope that they’ll do that, we hope that the protests will remain peaceful,” Pompeo said in an interview.

Hong Kong’s protesters have adroitly pulled off a minor strategic communications coup and exposed the Communist Party’s deep vulnerability to truthful messages directed at the Chinese people and the international community.

The United States and other Western governments, with far more sophisticated instruments of communications at their disposal, should follow the Hong Kong protesters’ lead and prepare an unapologetic name-and-shame campaign against Chinese leaders.

Beijing should be under no illusion that if it uses force, this administration will return to “business as usual” as its predecessors did after Tiananmen. In addition, former statesmen and other pro-engagement figures should refrain from giving China cover for any outrage it may commit against Hong Kong.