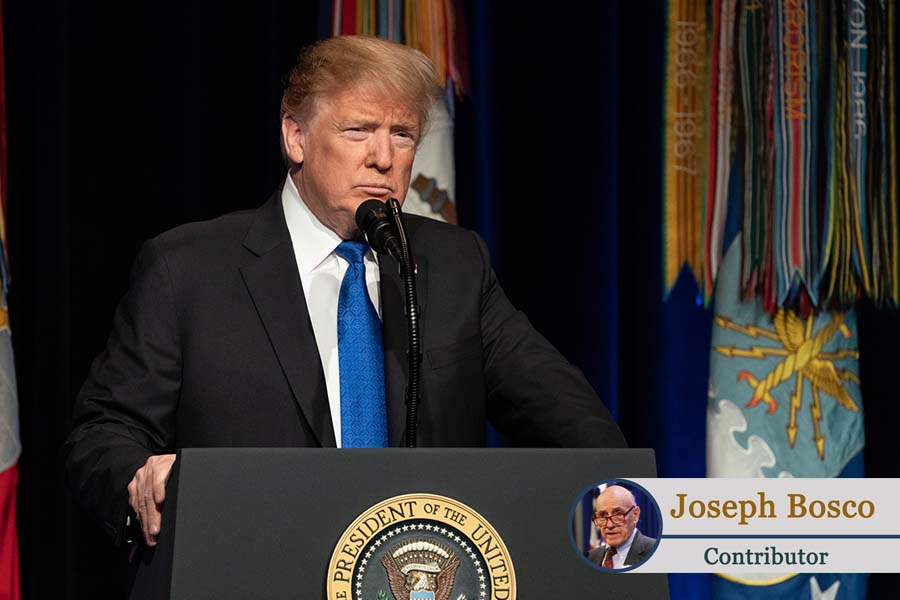 ◎ If Trump and Xi can make the tough decisions, they can avoid military confrontation that hardliners on both sides see as inevitable and even necessary.

President Donald Trump needs to give Xi Jinping a tough-love message when they next meet at Mar-a-Lago, or perhaps in a quasi-affectionate letter such as the ones he exchanges with Kim Jong Un.

He would address him as President Xi, rather than using one of his Communist Party titles, because Chinese leaders seem to prefer the Western usage. It carries an aura associated with national leaders chosen by their people through democratic process and not by whim, violence or the power machinations of a small, unelected clique.

There are heads of regimes who don’t pretend to have genuine popular legitimacy, such as Chairman Mao Zedong (“political power comes from the barrel of a gun”) or North Korea’s Kim, who inherited the job from his father and grandfather.

After the issue of trade, North Korea will be high on Trump’s agenda with Xi, and he may want to recap the history of their respective relations with the North Korean leader. Unlike Trump, Xi didn’t bother to meet Kim until each had been in power for several years. But when Trump and Kim began to talk about North Korea’s denuclearization, Xi suddenly summoned Kim to Beijing.

For decades, as North Korea mounted its threat against America and its allies, Chinese leaders dismissed U.S. appeals for support; North Korea’s nuclear weapons and missile programs were Washington’s problem. Despite Chinese leaders’ disclaimers, Western leaders knew that Beijing had more leverage over Pyongyang than it let on. Chinese officials played on that knowledge by promising to be more helpful regarding North Korea — if only the West would be tolerant of malign Chinese behavior on trade, currency, Taiwan’s independence, human rights, and control of the East and South China Seas. For years, Western leaders accepted Beijing’s special pleading.

Determined to prove he is different from, and more astute than, his predecessors, Trump launched a campaign of “maximum pressure” that quickly got Kim’s and Xi’s attention, and both seemed to pay him wary respect.

His policy approach consisted of three mutually-reinforcing elements: a credible use-of-force threat against North Korea; escalating economic sanctions on Pyongyang, as well as some on China; and a dramatic calling-out of North Korea’s horrible human rights record in speeches to the United Nations, South Korea’s National Assembly and U.S. Congress. The hidden message: the Kim dynasty is unfit to govern. No previous White House occupant has dared to hint at regime change for North Korea.

All those components of Trump’s pressure campaign were starting to pay off — until Xi met several times with Kim to put a damper on their progress. China clearly does not want to give up the North Korea “get-out-of-jail card” that it successfully has used to distract the West from its own actions. Trump must warn Xi that if he continues with that game, the three-way dynamic will revert to square one.

North Korea is far from the only volatile issue between the United States and China. For decades, Beijing has reneged on commitments to economic and political reform. Since Xi became head of the Chinese Communist Party, its aggressive regional and global policies increasingly threaten world peace. China’s actions in the South China Sea, East China Sea, Yellow Sea, and against Taiwan are putting China and the West on a path to conflict.

Trump’s early personal rapport with Xi may yet pay dividends if he backs it up with a strong demonstration of U.S. will. Trump has made it clear he intends to change the U.S.-China relationship and with as capable and pragmatic a partner as Xi, he could well achieve a historic breakthrough — but it will not be easy.

If these two leaders can make the tough decisions — Trump to stand firm across the board, Xi to lead the Communist Party out of the dead end it is creating for itself — they can avoid military confrontation that hardliners on both sides see as inevitable and even necessary. If either fails in his task, the doomsday voices could be proved right.

The tough-love part of Trump’s message is that China must make most of the concessions and policy changes needed to establish genuine cooperation, not the phony “win-win” and “strategic partners” rhetoric that largely has served only Beijing’s interests. China is violating virtually every international norm to pursue its stated goal of upending the international order — the very global system that has enabled its remarkable economic success.

Chinese leaders have obsessed about a “century of humiliation” at the hands of the West, but that debt has been more than paid by a half-century of massive Western investment, technical support and forbearance in the face of Chinese misdeeds.

They also rehearse the argument made by Henry Kissinger and others that the existing world order was put into place after World War II without China’s participation. Yet, the Republic of China was a founding member of the United Nations and made a permanent member of the U.N. Security Council, a position of special power and prestige that Beijing relishes. China participated fully in the Dumbarton Oaks and Bretton Woods conferences and other international meetings that established the post-war political and economic systems.

China ignores that history but has no problem demanding certain positions such as the absurd claim that the entire South China Sea belongs to it, or the obsolete notion that now-democratic Taiwan is, or has ever been, part of Communist China. Trump can tell Xi that his government needs to stop complaining about having been left out — the self-pity has worn thin and is not worthy of a rising great power, especially one not at all reluctant to bully smaller parties such as Taiwan and Southeast Asian countries.

It would advance the cause of peace and stability in the region if Trump would state unequivocally to Xi that Washington will defend Taiwan against any aggression from China. It also would be the best way to preserve the two leaders’ personal friendship and make Nobel-caliber history together.