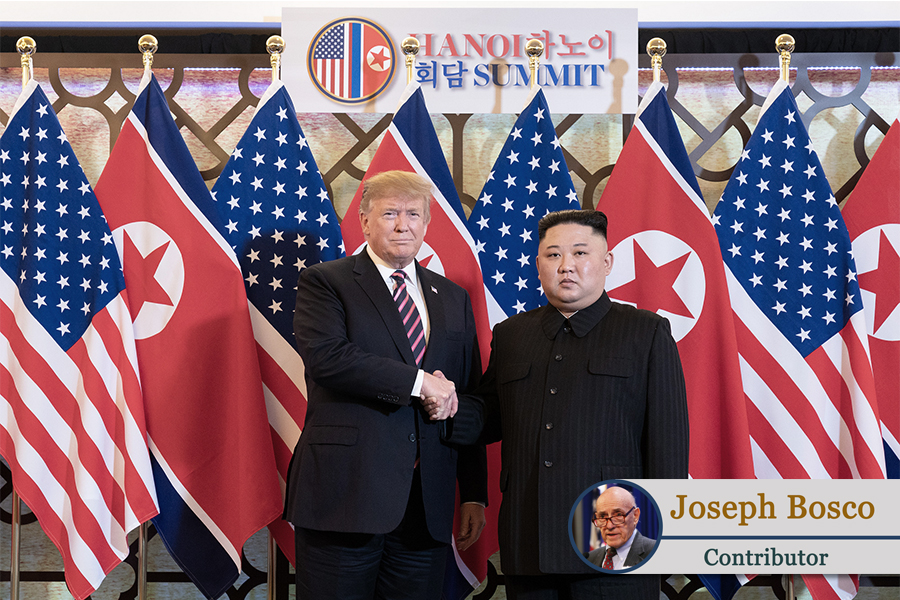 ◎ How did the failure to secure a declaration of all North Korea’s nuclear and missile capabilities, let alone a specific commitment to destroy them, somehow move the ball forward?

Yet, despite those dire assessments of the immediate outcome, the meeting between President Trump and Kim Jong Un, in fact, greatly strengthened Washington’s longer-term negotiating position and advanced the prospect of North Korea’s denuclearization, either peacefully or by a return to the maximum pressure campaign.

Even the president’s regrettable response to a question on the death of American student Otto Warmbier perversely opened the door to renewed emphasis on North Korea’s human rights record, one of the three elements of leverage over Pyongyang, and Beijing.  (The others were the sanctionsand the “fire and fury” threats of force.)

How did the failure to secure a declaration of all North Korea’s nuclear and missile capabilities, let alone a specific commitment to destroy them, somehow move the ball forward?

First, Kim offered to meet Washington’s goal of complete, verifiable and irreversible dismantlement of at least the major nuclear complex at Yongbyon with its 300 different facilities.  It is not nearly enough to justify lifting all or a major share of economic sanctions, but it is also not nothing, and at minimum provides a starting point for the next phase of negotiations.

Second, there will be further negotiations because Kim’s very refusal to commit at this time to a wider dismantlement showed his seriousness and relative candor far more than another empty promise would have. It also showed a measure of respect for the American president.

Third, Trump showed the ability to fight back in a test of wills after what had been widely seen as a humiliating defeat at the hands of Speaker Nancy Pelosi (D-Calif.) and Congressional Democrats. His capitulation on funding for the southern border wall and the government shutdownprobably encouraged Kim, and his senior advisor, China’s Xi Jinping, to believe he could not withstand the pressure of another strategic showdown.

Fourth, the fresh challenge from explosive congressional hearings during the Hanoi trip created extreme new duress and made him eager for a foreign policy victory and openly covetous of a Nobel Peace Prize. Kim and his colleagues surely had added confidence going into the meeting, as did much of the U.S. media, that Trump was vulnerable to the temptation of a quick but flawed deal. Offered precisely that, he instead walked away and demonstrated a sense of presidential responsibility to get this historic opportunity right.

For all those reasons, the North Koreans now know better than ever that they cannot flatter, deceive or intimidate this president into accepting anything less than what U.S. policy has demanded for decades and what international law requires.

While the negotiation itself was handled with competence and courage by Trump and his foreign policy and national security team, two topics in the press conference afterward raised questions regarding the path ahead.

When a reporter asked whether the president had confronted his “friend” Kim about the circumstances of Warmbier’s imprisonment, torture and death, Trump said: “He tells me he didn’t know about it and I will take him at his word. … I don’t believe he knew about it.”

The grieving Warmbier family was shocked, as were most Americans. For months they had been consoled and comforted by Trump’s sympathy and humanity on a personal level, even as he publicly touted his “love letters” with Kim. The Warmbiers issued this statement: “We have been respectful during this summit process. Now we must speak out. Kim and his evil regime are responsible for the death of our son Otto. Kim and his evil regime are responsible for unimaginable cruelty and inhumanity. No excuse or lavish praise can change that.”

The president has taken a moral and public relations bullet for Kim, who now owes him big-time. Trump should collect on that exoneration debt by asking Kim — who, he said, “felt very badly about it” — to issue his own honest statement of responsibility and regret. Further, Kim should give meaning to Trump’s pledge that the young Warmbier “will not have died in vain” by committing in his memory to close the mass detention campswhere thousands of North Koreans suffer and die as he did.

The president owes that as well to the North Korean defector who tearfully waved his crutches at the State of the Union address and to the score of other victims he hosted and brandished in the Oval Office as symbols of the Kim regime’s moral depravity. At the United Nations and before the Korean National Assembly as well, Trump condemned the regime as unfit to govern. That got the attention of the Xi-Kim strategic partnership.

Speaking of Xi, Trump also gave him a pass when he said he has been “very helpful” on North Korea. Nevertheless, he said he “could be a little more helpful” and had previously noted that both China and Russia were working to undermine the U.N. and U.S. sanctions. That element of the maximum pressure campaign — secondary sanctions on China — also needs to be revived.

After the second summit, Trump now has the upper hand with both North Korea and China. He should not let this historic opportunity slip through his fingers.