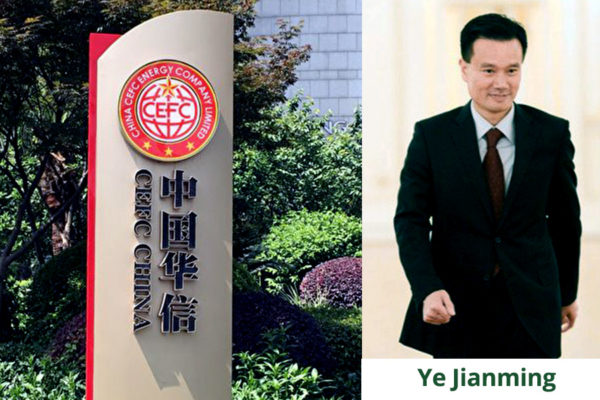 ◎ Behind Ye Jianming’s business success is a complex and mysterious web of government, business, military, and mafia connections.

Ye’s detention has not been officially announced.

Behind Ye Jianming’s business success is a complex and mysterious web of government, business, military, and mafia connections.

The backdrop on CEFC:
1. CEFC is the largest private energy company outside the three biggest state-owned oil conglomerates in mainland China. Ye Jianming’s company is also the only private enterprise among the eight Shanghai companies on the Fortune 500 list. In recent years, Ye has been acquiring assets both in mainland China and abroad, and nearly all the deals involve companies in the financial sector.

2. In the aftermath of the notorious Xiamen Yuanhua smuggling incident in the late 1990s, a then 29-year-old Ye Jianming won an auction for Xiamen China Airlines Petroleum Co., one of the firms involved in the Xiamen Yuanhua case. Later, Ye founded CEFC and entered the energy industry.

The CEFC Foundation’s executive chairman is Li Guangjin, a former political commissar of the Shanghai Garrison. Li had retired a year before the foundation was founded. Wang Hongyuan, a former bureau chief overseeing financial affairs and construction works in the Central Military Commission General Office, served as CEFC Foundation’s executive director. Meanwhile, the China Energy Foundation was headed by He Zhiping, the former chief of Hong Kong’s Home Affairs Bureau.

On Nov. 21, 2017, He Zhiping was arrested in New York on charges of bribing African government officials through financial institutions in the United States. He was reportedly in charge of a “China Energy Foundation” think-tank, an institution that derived all its fundings from Ye Jianming’s CEFC.

5. Ye Jianming reportedly said at an internal conference: “We at CEFC adopt the strategy of utilizing overseas resources to serve our country. So our entire set up, from strategic arrangements to diplomatic arrangements, must prioritize the country’s interests.”

Our take:
1. The Chinese regime has a monopoly over China’s energy sector, and energy operations are part of national strategy. Yet CEFC, a private company, is second only to state giants PetroChina, Sinopec, and China National Offshore Oil Corporation, and is also able to handle international petroleum and gas upstream and downstream components. Without official backing, CEFC would not be able to run such a large scale operation.

2. From CEFC’s overseas acquisitions and united front activities, we believe that Ye Jianming is a “white glove,” or money launderer for the CCP’s military and national security departments. In fact, CEFC’s rise coincided with a period where the Jiang faction controlled the military and the intelligence apparatus.

Xi Jinping is presently cleaning out Jiang faction elements in the intelligence apparatus, and Ye was likely targeted as part of the breakthrough process. Tomorrow Group’s Xiao Jianhua, fugitive tycoon Guo Wengui, and Anbang’s Wu Xiaohui were likely also targeted as part of Xi’s clean up.

3. Like Anbang, CEFC morphed into a financial conglomerate through mergers and acquisitions, and hence the Xi administration is targeting the company to mitigate financial risks.

4. We believe that the Chinese authorities could either directly or indirectly takeover CEFC, and the company could be split or transferred. However, CEFC should remain a private company.