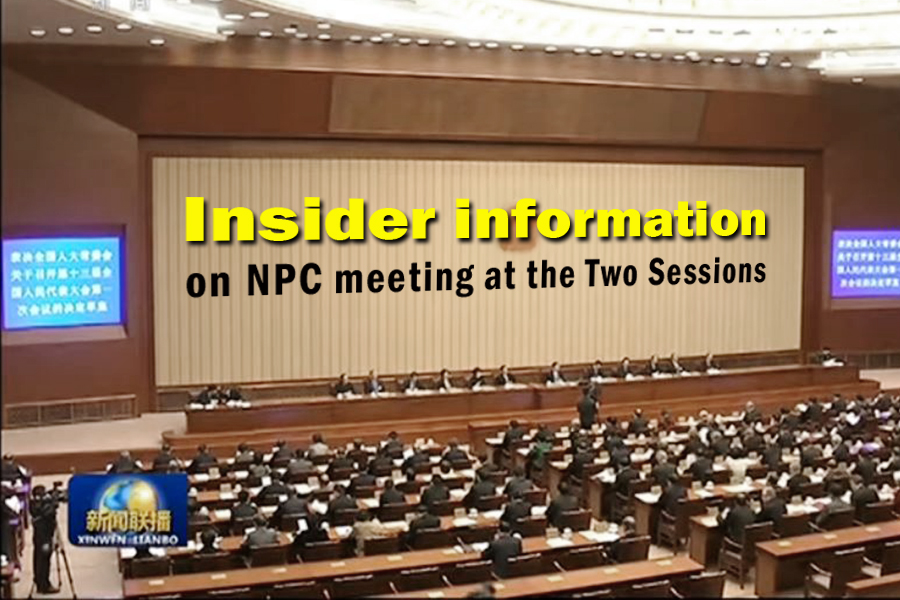 ◎ We believe that the NPC meeting this year is extended by three days for its members to deliberate the draft resolution proposed at the Third Plenum.

We recently learned from sources inside the Chinese Communist Party (CCP) about two changes to the first session of the new National People’s Congress (NPC) at the Two Sessions:

1. On the agenda are “exploratory discussions” (“yun niang”) about personnel issues.

2. According to the 19th Central Committee Third Plenum communique released on Feb. 28, the NPC will deliberate a draft resolution on deepening reform of Party and state institutions.

1. We believe that the NPC meeting this year is extended by three days for its members to deliberate the draft resolution proposed at the Third Plenum, and discuss personnel arrangements for the new state institutions.

The description of personnel talks as “exploratory discussions” suggests that the structure of the State Council should remain unchanged after the Two Sessions. The session could count as preliminary discussions for future personnel movement.

2. This round of reforms to state institutions should see the merging of Party and state institutions with overlapping functions, and the sharing of Party and state personnel. For instance, the Central Commission for Discipline Inspection and the new National Supervision Commission could share offices and duties. The reforms can be interpreted as the Party strengthening its control over the state government, or a transition of sorts where the Party’s authority is being handed over to the state government.

Also, state agencies and commissions with similar functions could merge, such as a shift from a “central bank and three commissions” financial oversight structure to a “central bank plus one commission” model. (See “Why China’s Financial Oversight Agencies May be Merging”)

3. Xi Jinping’s state institutions reform and power rebalancing could serve a similar function as his military modernization reforms, which is to clean out the Jiang faction’s remaining presence. Xi will likely focus on cleaning up the national security and intelligence apparatus, the united front apparatus, the propaganda apparatus, and the diplomatic apparatus.