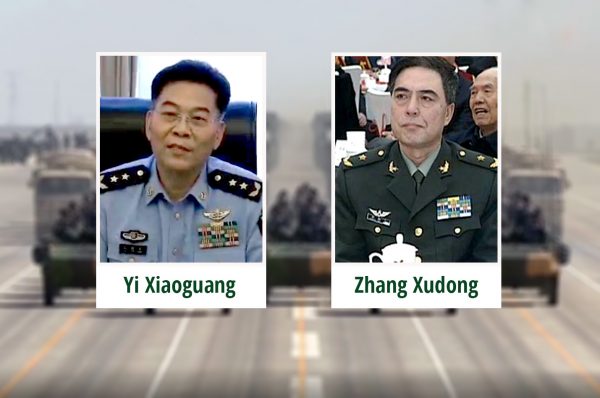 ◎ The appointment of Zhang Xudong and Yi Xiaoguang as deputy and commander of the CTC is revealing of Xi’s handling of military personnel reshuffling.

Zhang Xudong, the former ground force commander of the Central Theater Command (CTC), is now the CTC’s deputy commander, according to a Feb. 13 report on Beijing’s Shijingshan District government website.

The government website article also noted that air force general Yi Xiaoguang, the ex-deputy chief of general staff of the old General Staff Department, is now commander of the CTC, the first time Yi’s appointment was made public.

The backdrop:
1. Yi Xiaoguang’s appointment as CTC commander appeared to be confirmed as early as Oct. 18, 2017 when he attended a 19th Party Congress delegate meeting wearing a CTC unit patch and seated beside CTC political commissar Yin Fanglong, a scene aired by China Central Television.

Yi is the first Chinese air force general to head a theater command. He enlisted with the People’s Liberation Army Air Force in 1974, and was appointed Deputy Chief of Joint Staff under Xi Jinping. Yi was promoted to full general in July 2016.

2. Zhang Xudong was the 79th Group Army (formerly 39th Group Army) commander and deputy Party secretary before Xi Jinping announced military reforms in 2015. The 79th Group Army is part of the Northern Theater Command (previously Shenyang Military Region). In March 2017, he was transferred to the CTC to serve as ground force commander.

Zhang was promoted to major general in July 2012, a period when purged Central Military Commission (CMC) vice chairs Xu Caihou and Guo Boxiong were still in charge of the military.

Our take:
1. The appointment of Zhang Xudong and Yi Xiaoguang as deputy and commander of the CTC is revealing of Xi Jinping’s handling of military personnel reshuffling.

Currently, many senior generals in the PLA rose up the ranks during Jiang Zemin’s era of dominance (1997 to 2012), a period where Jiang faction members Xu Caihou and Guo Boxiong oversaw military promotions. To break up existing power networks in the military, Xi has resorted to shifting personnel to different regions and even across military branches. Xi then reevaluates the loyalty of the generals in their new positions.

2. We noted in our article on the downsized CMC that Xi needs at least five years to groom a new batch of generals that he trusts. The mass promotion of major generals in recent years is an indication of Xi’s personnel strategy.