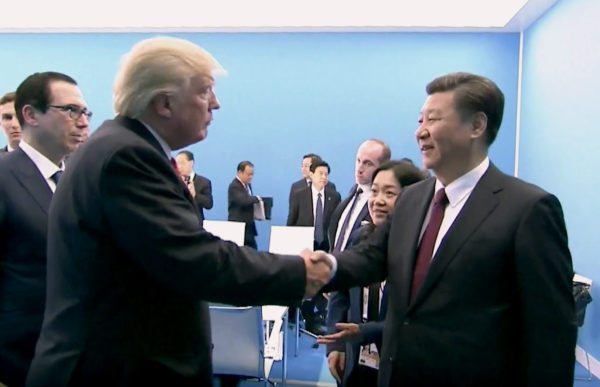 When talking about China, President Donald Trump usually brings up his cordial friendship with Xi Jinping. “People say we have the best relationship of any president-president. I happen to think he’s a very good person,” Trump said in an interview with Fox News.

Trump’s confidants have expressed similar sentiments about Xi. After leaving the White House and returning to Breitbart, Steve Bannon said that Trump respects Xi the most of all the world leaders. Mike Pompeo, director of the Central Intelligence Agency, told Bloomberg that Xi’s power consolidation at the 19th Party Congress puts him in a “dominant position with incredible capacity to do good around the world.”

In contrast, the Trump administration has adopted a hawkish attitude towards China, particularly on trade. White House insiders familiar with Trump’s national security strategy say that he plans to accuse China of “economic aggression” and will be harder on China than past administrations.

Why it matters: Some observers seem to equate Trump’s friendliness with Xi after their April meeting in Florida as Trump backtracking from his combative approach to China as a presidential candidate. But developments to date suggest that the only thing Trump changed was being nice to Xi.

Our take: We believe that Trump’s contrasting treatment of Xi and China may be an important U.S. national strategy. Based on our observation, America seems to be betting that Xi’s rule would have significant and far-reaching consequences for the world.

Check out our full report in Real Clear Defense for detailed analysis.