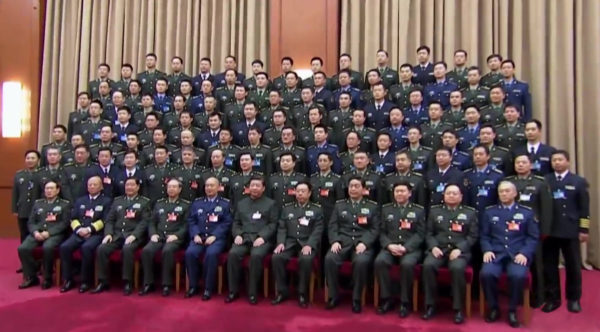 ◎ The spike in senior military official suicides suggests that they are afraid of being punished for their past offenses.

In consolidating reports from overseas Chinese media, at least 15 high-ranking officers (colonels and generals) in the People’s Liberation Army (PLA) have committed suicide since Xi Jinping took office in 2012 and launched the anti-corruption campaign.

By contrast, only one Chinese Communist Party (CCP) general was killed by troops from a foreign country. General Zuo Quan, a senior staff officer of the Eighth Route Army, was hit by Japanese artillery in 1942 and succumbed to his wounds. Two other generals died during the Second Sino-Japanese War period (1937-1945), but not while fighting the Japanese. Peng Xuefeng was killed in action in 1944 while engaging Kuomintang troops, while Gao Jingting was executed by his troops in 1939 for ignoring Mao Zedong’s Party line on not aggressively attacking the Japanese. Meanwhile, over 200 Kuomintang generals were killed fighting the Japanese.

Some notable suicide cases since the start of the anti-corruption drive include (in order of date):

Early July 2016: Major General Zhang Ming, formerly the chief of staff of the Jinan Provincial Military District, jumped off a building after he was investigated and found to be involved in the Xu Caihou corruption case.

A military official in charge of propaganda in the Nanjing Military District jumped off the Fourth Nanjing Yangtze Bridge and drowned in the Yangtze River.

Sept. 13, 2016: Major general Qu Rui, the deputy director of the CMC Joint Staff Department’s operations bureau, hanged himself during the period where he was investigated.

Nov. 23, 2017: General Zhang Yang, the CMC Political Work Department director, hanged himself at home. He had been investigated since Aug. 28. (See our Nov. 28 article.)

Why it matters: Jiang Zemin dominance over the military reduced Hu Jintao to a figurehead during his tenure as CCP leader. Jiang bought the loyalty of top generals by overseeing their promotion, while his cronies Guo Boxiong and Xu Caihou fostered corruption in the military by getting senior officers to pay exorbitant cash sums to advance in rank.

The spike in senior military official suicides suggests that they are afraid of being punished for their past offenses.