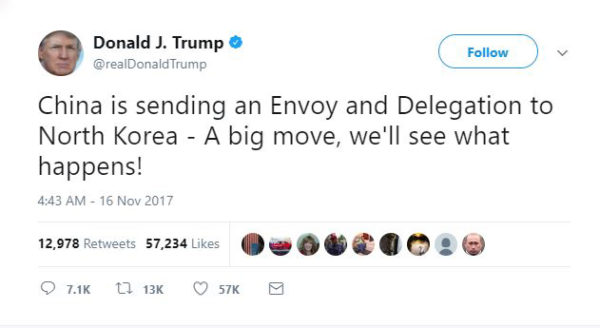 ◎ Based on our research, Song Tao may be a Xi protégé.

President Donald Trump tweeted on Nov. 16 that China is making a “big move” in dispatching an “Envoy and Delegation” to North Korea. “We’ll see what happens,” he added.

A day earlier, Trump responded to The New York Times’s criticism of his rapport with Xi Jinping by tweeting that “these relationships are a good thing, not a bad thing,” and added that the Times’s view on foreign policy is “naive (or dumb).”

The backdrop: In a scathing Nov. 14 editorial, the Times accused Trump of getting close to “authoritarian leaders” like Xi and Russia’s Vladimir Putin to advance national interests. The Times also indicated that Trump’s relationships with Xi and Putin have thus far shown limited results.

Meanwhile, Beijing announced on Nov. 15 that the Chinese Communist Party’s (CCP) international affairs department chief Song Tao would be visiting North Korea on Nov. 17 to brief Pyongyang on the outcome of the 19th Party Congress.