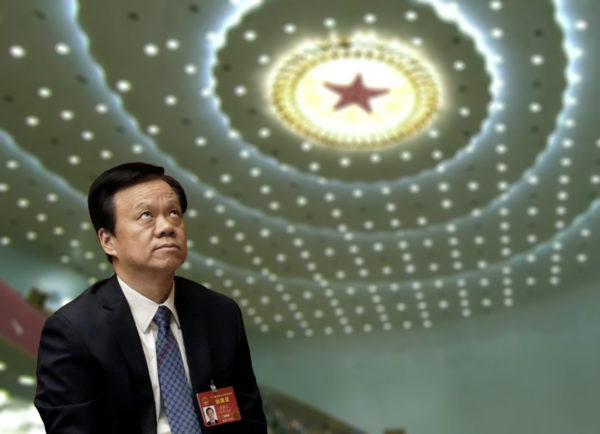 ◎ Xi and Chen were never mentor and protégé.

Like his two predecessors, Chongqing’s Party Secretary Chen Min’er is widely regarded as Xi’s successor. Mainstream views believed that Chen would receive an exceptional promotion to the powerful Politburo Standing Committee in the two months leading up to the 19th Party Congress. Likely anticipating Chen’s rising prospects, over 20 global businesses (including Microsoft and Ford) pledged to invest over $10 billion in Chongqing on Sept. 24, according to Nikkei Asian Review.

We noted in our Sept. 16 brief that Chen’s questionable political background and his incidental rise up the ranks of the Chinese Communist Party (CCP) is unlikely to warrant him succeeding Xi. Chen’s failure to make the 19th Congress Standing Committee confirms our analysis.

Owing to his position as Chongqing chief, Chen’s entry into the Politburo falls within expectations. However, if Chen fails to meet Xi’s expectations in the coming years, he may be prematurely ousted like his predecessors Bo Xilai and Sun Zhengcai.

Not Xi’s Protégé: Mentor-protégé relationships in the CCP are cultivated through the mentor overseeing their protégé’s promotion. Going by this benchmark, Xi and Chen were never mentor and protégé.

Xi and Chen had a working relationship in Zhejiang Province from 2002 to 2007. However, Chen was promoted to Zhejiang propaganda chief before Xi headed Zhejiang. In addition, provincial-level appointments are made by the CCP Organization Department, and Xi couldn’t have influenced Chen’s promotion even if he wanted to.

Chen’s promotion during Xi’s time as CCP General Secretary is the result of circumstance rather than the establishing of a mentor-protégé relationship. After Xi moved Zhao Kezhi to replace purged Hebei chief Zhou Benshun in 2015, there were very few candidates left to fill the vacancy. As a result, Chen became Guizhou chief. A similar scenario brought about Chen’s promotion in July when Sun Zhengcai was purged by Xi.

Guizhou’s achievements: Guizhou became one of China’s fastest growing regions in recent years owing to its competitive big data industry, an area that Chen Min’er oversaw but did not engineer.

In May 2017, Xi promoted then technocrat chief of Guiyang, Chen Gang (no relation to Chen Min’er), to deputy mayor of Hebei and Party secretary of the Xiong’an New Area. Xi then tasked Chen with growing the region’s big data industry. Even though Chen Min’er headed Guizhou’s big data decision-making body, it was Chen Gang who made the most contribution to the development of the industry.

Not grooming a successor: Xi’s successful power consolidation at the 19th Congress is prime proof that he is seeking at least a third term in office. There is little reason for Xi to be nurturing future challengers to his authority.

‘Bo Xilai 3.0’: SinoInsider believes Chen’s political background is not fully clear to Xi, and he is one of several officials whom Xi Jinping is keeping a watchful eye on.

In 2016, Chen and several other officials openly declared their loyalty to Xi (Chen, however, was among the last to do so), but how he governs Chongqing may eventually reveal a different factional allegiance. His political prospects will hinge on whether or not he cleans out Chongqing of the “malignant” influence of former Chongqing elite and Jiang faction members Bo Xilai and Wang Lijun.

Sun Zhengcai, Chen’s immediate predecessor, was accused of not scrubbing Chongqing of Bo and Wang’s influence and was duly purged. Should Chen fail to carry out Xi’s orders, Xi may mark him as “Bo Xilai 3.0,” or yet another candidate the Jiang faction has chosen to displace Xi in a coup.