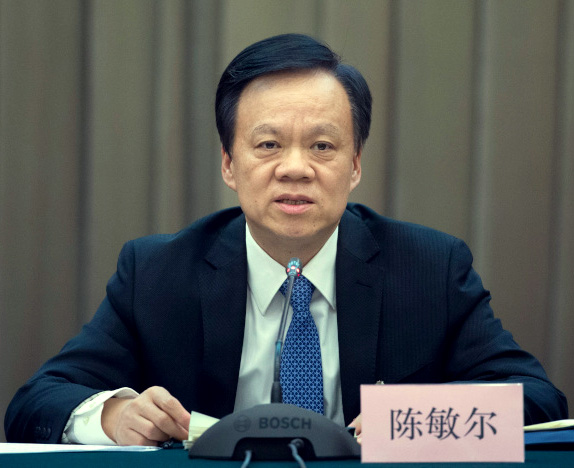 ◎ Chen Min’er is unlikely to succeed Xi due to his questionable and circumstantial rise through the ranks of the CCP.

Newly appointed Chongqing chief Chen Min’er is tipped for a very bright political future, according to a Sept. 12 profile by The New York Times.

The Times reports that it is “nearly certain” that Chen will end up on the Politburo this Oct and that he is a “potential candidate to one day succeed Mr. Xi ” as head of the Chinese Communist Party (CCP).

Xi or Jiang protégé? The claim that Chen is Xi’s protégé by virtue of them having worked together in Zhejiang Province is an incomplete understanding of how mentor-protégé relationships work in the CCP.

A typical telltale sign of a mentor-protégé relationship is the promotion of the protégé through the ranks by his mentor. When Xi headed Zhejiang from 2002 to 2007, he never promoted Chen, who was then provincial propaganda chief. Chen, however, rose rather quickly through Zhejiang’s propaganda apparatus before Xi became provincial chief.

In December 1999, Chen was put in charge of the official newspaper of Zhejiang, and after only two years, he was promoted to Zhejiang’s propaganda chief. Since the Party’s propaganda and domestic security apparatus was firmly under the control of CCP head Jiang Zemin and his political faction at the time, Chen could only have secured rapid career advancement if he had diligently pushed Jiang’s “stability maintenance” directive, i.e. attack Falun Gong and underground Christians in all of Zhenjiang’s propaganda outlets to justify sweeping and brutal persecution.

In 2015, Chen Min’er’s swift promotion from governor of Guizhou to provincial chief is more likely due to circumstance than a mentor-protégé relationship with Xi. Chen’s predecessor Zhao Kezhi was promoted to head Hebei Province after the incumbent Zhou Benshun was purged by Xi. Zhou was the Secretary General of the Political and Legal Affairs Commission and top secretary (mishu) of disgraced security czar Zhou Yongkang, who is now serving a life sentence in prison.

In July this year, Chen was promoted to head of Chongqing but it is unclear if Xi promoted Chen because he was impressed by Chen’s efforts at poverty alleviation in Guizhou or something else — even in the Times article, a retired rural policy officer admits that Chen’s policies were “designed to show quick results but could backfire.”

Chen could have been promoted because he publicly declared loyalty to Xi in February 2016. Chen was one of the early provincial chiefs to hail Xi as “core” leader of the CCP, a title that implies paramount status.

While it’s possible that Xi considers public declarations of loyalty when promoting officials, the declarations themselves do not grant political immunity. For instance, Huang Xingguo, the former mayor and acting Party secretary of Tianjin, was purged on Sept. 10, 2016 despite having pledged loyalty to Xi earlier in the year. Huang is close to Politburo Standing Committee and Jiang faction member Zhang Gaoli.

In sum, Chen is publicly supportive of Xi in recent months, but we suspect he has closer ties with the Jiang faction based on his early career progression in Zhejiang Province. Xi doesn’t have many supporters to choose from to fill up senior positions, and has to make do with the current pool of available officials who come from various political backgrounds. Whether or not Chen gets promoted to higher office is dependent on his future work performance and loyalty to Xi.

Why Xi ran as Guizhou delegate: We believe Xi Jinping chose to participate in the 19th Party Congress as a delegate of Guizhou to avoid Jiang faction sabotage, not to show support for Chen.

In 2012, Xi joined the 18th Party Congress as a delegate of Shanghai, Jiang’s longtime home base, at a time before he essentially declared war against Jiang’s circle of influence. Running as a Shanghai delegate this time, however, would be politically foolhardy because Jiang’s faction still holds considerable sway there.

Meanwhile, Guizhou is the political base of former Party leader Hu Jintao, an ally of Xi’s against the Jiang faction. Xi’s key supporters such as General Office director Li Zhanshu and Hebei chief Zhao Kezhi also once headed Guizhou and groomed the local officials. Thus by running in Guizhou, Xi has a better chance of securing a spot in the Congress.

Xi’s successor? While Xi Jinping has hinted at reforming the CCP, his overall political direction is currently still unclear. What we do know, however, is that Chen Min’er is unlikely to succeed Xi due to his questionable and circumstantial rise through the ranks of the CCP. Chen lacks the political experience required to be seriously considered a potential successor.