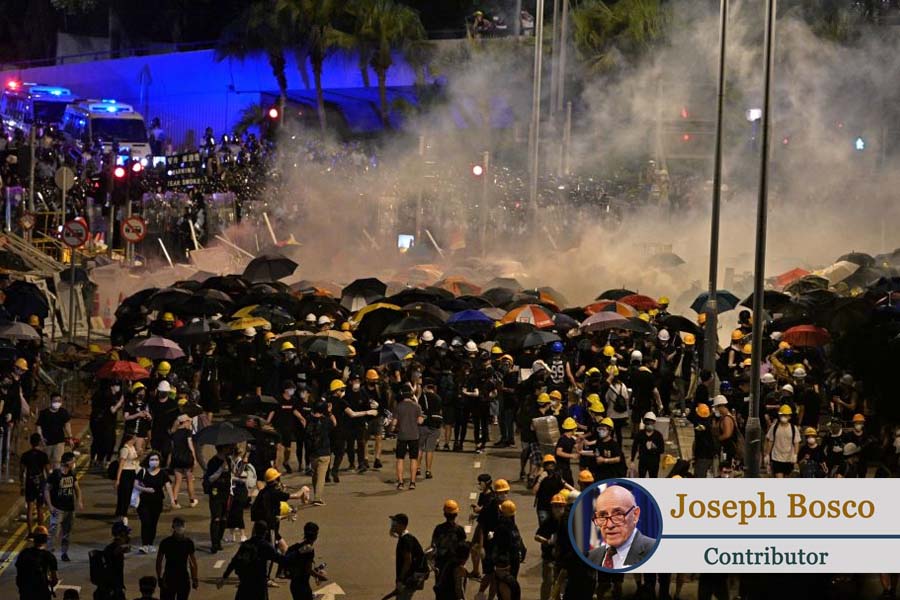 ◎ Now it is time for Beijing to advance its thinking and face reality.

The people of Hong Kong have demonstrated dramatically — and until Monday, nonviolently — that they reject Beijing’s heavy-handed tactics in eroding the territory’s autonomy guaranteed in the political handover of the British crown colony to the People’s Republic of China. Over the years, the Chinese Communist Party (CCP) has engaged in a creeping reneging of those arrangements. When it changed the election laws in 2014, it triggered a citizen protest culminating in the Umbrella Movement.

Since Deng Xiaoping announced the “one country, two systems” concept in 1984 as the model for Hong Kong and Taiwan, the people of Taiwan have taken an avid interest in what has been happening in the autonomous polity.

Already turned off by Beijing’s treatment of the Chinese people under its direct control, Taiwanese aversion to communist rule only deepened by what they saw happening in Hong Kong. They sympathized with the plight of the population and were impressed by their spirit of resistance. In a kind of whip-sawing of democratic assertiveness, the people of Hong Kong were reciprocally inspired by Taiwan’s stand against China’s economic, diplomatic and military pressures as expressed in the 2014 Sunflower Movement.

Taiwanese public opinion had been gradually turning against China ever since the Tiananmen Square massacre exposed in the bloodiest way the despotic nature of that government. The fact that it was carried out by Deng, the leader who promised fair and decent treatment for the people of Hong Kong and Taiwan, undermined any potential attractiveness of the “one country, two systems” formula.

On the contrary, for older Taiwanese, it revived painful memories of their own encounter with murderous government brutality in the White Terror and February 28 events. Having rid themselves of an anti-communist dictatorship, they had no intention of throwing themselves into the arms of a communist one.

As the years rolled by, the numbers of people on Taiwan with ties to China steadily diminished as Taiwanese citizens were born. Public opinion polls reflected the changing demographics and the evolving attitudes — decreasing percentages identified themselves as Chinese, with more opting instead for either Taiwanese/Chinese or just Taiwanese identity.

The anti-Beijing attitudes of the Hong Kong and Taiwan populations now are set in stone and there is no way the communist government can win back hearts and minds in either place, short of fundamentally changing its own anti-democratic mindset and behavior.

As for the views of the mainland Chinese, that was demonstrated in the most vivid way by the tens of millions who protested for reform in over a hundred Chinese cities in 1988 and 1989, as well as in the thousands of civil protests that occur each year over local or national issues.

But now another factor is emerging, running directly counter to Beijing’s decades of internal and external posturing and weakening one of its primary nationalist rallying-cries — the status of Taiwan. Since Mao Zedong, China’s leaders have religiously proclaimed Taiwan as an integral part of China and declared it a “core” issue for the Chinese people.

Official propaganda has sought to stir popular passions on the issue, and Western scholars simply accepted unquestioningly that nationalist fervor left Beijing no room to maneuver on the question of Taiwan. According to that widely-accepted argument, any reduction in the constant pressure for unification (Taiwan never had been part of the People’s Republic) would be considered a betrayal of Chinese sovereignty and create such a popular outcry that the regime’s hold on power would be threatened.

Given those existential stakes, so the mythology goes, the CCP has no choice but to keep pressing Taiwan, even at the risk of war with the United States.

Yet, something about the conventional wisdom always seemed a bit hollow. Anecdotally, conversations with young Chinese, in China and the United States, evidenced no particular interest in the Taiwan question, and now a recent poll with a professional sampling confirms that general indifference: “[O]nly 22 percent of respondents selected … reunification with Taiwan … as among their top five issues.” If Taiwan ever truly was a core interest for the Chinese people, it is a core that clearly is melting away.

China’s leaders need to make a fundamental reassessment of their Taiwan and Hong Kong policies and determine whether it is in their long-term interest to continue their futile efforts to disturb the status quo and stifle the democratic aspirations of populations that have tasted freedom’s benefits.

Renouncing the use of force against Taiwan and of political interference in Hong Kong would accept the reality that Chinese societies are as capable as any other people to conduct their own affairs — as Deng himself said about Hong Kong when he announced “one country, two systems.”

Now it is time for Beijing to advance its thinking and face reality. Of course, it fears that tolerating an independent Taiwan and a democratic virtual city-state in Hong Kong might give dangerous ideas to the Tibetans and Uighurs, let alone the Chinese people themselves. But such is the precarious fate, self-imposed, of regimes that presume to rule others against their will.