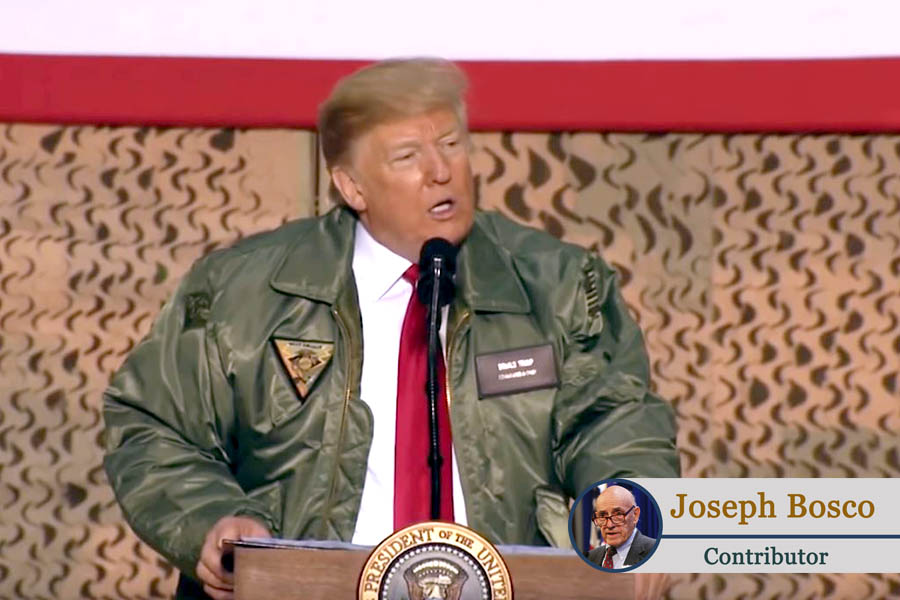 Is China About to Give America a ‘Bloody Nose’?

◎ The real challenge will be America’s response to China’s first-level retaliation, and whether Washington is prepared to move up the escalatory ladder.

China is likely planning to give the United States a “bloody nose” in Asia — economically and militarily.

This would be a turnabout of the tactic Washington openly considered in late 2017: launching a limited military strike to give the Kim Jong Un regime a taste of the consequences it would suffer if it persisted in its nuclear and missile testing and threats.

Aside from the kinetic component of the Trump administration’s “maximum pressure” campaign, the other two elements were economic sanctions and moral and political delegitimization of Pyongyang’s rule over the North Korean people.

The combination worked to get Kim’s attention and initially put him on the theoretical path to denuclearization — until China’s Xi Jinping intervenedbefore the Trump-Kim summit in Singapore to remind his junior anti-American partner of who is calling the geostrategic shots in East Asia.

Now Beijing seems to have decided that President Trump and his national security team also need a more tangible warning of where their confrontational approach to China is leading America, and potentially the world. It is signaling dire outcomes on trade, the South China Sea, Taiwan and the old standby threat, North Korea.

In the trade war, Beijing’s boycott of U.S. soybeans was its first retaliation against Trump’s tariffs but it has failed to deter the president, who has provided some compensation for American farmers’ financial losses.

China now has threatened to curtail the export of rare earths, the minerals essential for the production of advanced batteries and other technological products. The United States and other countries are seeking alternative sources and ways of reducing dependency on China’s control of those elements.

Whether Xi will consider dumping U.S. treasury bonds as a financial weapon remains to be seen, but, like many measures in the tangled economic relationship, China’s economy would pay a very high price for the devaluation that would follow. But its spokespersons are telling Washington that it is willing to pay whatever price is necessary to block U.S. pressures, using a line they have rolled out before — just prior to initiating military conflicts with India in 1962 and Vietnam in 1979 — “Don’t say we didn’t warn you.”

On the South China Sea, which Philippines President Rodrigo Duterte described this week as a “flashpoint for trouble,” moves and countermoves by the Chinese and American navies have increased dramatically the potential for conflict. “[They are] not testing water temperature, my God, [but who] fires the first shot.”

Unlike the Obama administration, the Trump team is responding in a serious, sustained way to Beijing’s claim to most of the waters and land features of the South China Sea. As Duterte put it: “Is it right for a country to claim the whole ocean?” The United Nations arbitral tribunal, ruling on the Philippines challenge, declared China’s claim to be both ahistorical and illegal.

But Beijing scorned the decision and continued building artificial islands on isolated outcroppings, while dredging and destroying natural coral reefs. It then proceeded to construct military facilities there, contrary to Xi’s explicit promise to President Obama during their 2016 Palm Springs meeting.

Given the further flouting of both international law and personal commitments, it is left to the United States as the ultimate guarantor of freedom of the seas to use its indispensable capabilities to block Beijing’s maritime aggression. Fortunately, British, French, Australian and other allies are joining in the U.S. Navy’s Freedom of Navigation Operations.

China wants to stop this multinational “ganging up” and probably is weighing whether to cause an incident directly against a U.S. Navy ship or aircraft, as one of its fighter jets did against an EP-3 reconnaissance aircraft in 2001, or to choose an allied target instead and complicate a U.S. response.

The Taiwan Strait provides another arena for Beijing to defy Western “containment’ and “violations of Chinese sovereignty.” After years of the U.S. Navy avoiding the Strait for fear of antagonizing China, the Trump administration has removed the restriction and allowed frequent routine transits. Now, allied navies also are making their presence known, incurring the ire of Beijing. An incident there is a real possibility, against an American or allied unit, or against a Taiwanese ship or plane.

Finally, there is China’s go-to crisis creator, the Kim regime in North Korea. Apparently having miscalculated the Trump administration’s seriousness on denuclearization, and encouraged by Beijing to test the U.S. president’s resolve, possibly because of all his flattering words about both communist dictators, Kim went for a full American back-down on sanctions and came away from Hanoi empty-handed.

Kim has expressed his frustration by doing some limited missile testing, spewing insults at Secretary of State Mike Pompeo and national security adviser John Bolton for carrying out the president’s stated policy, and by executing members of his own nuclear negotiating team. It is possible he is calling on Trump to rid himself of his advisers, even if not in as drastic a fashion. Or, equally possible, the North Koreans killed at the airportfollowing the failed Hanoi talks were in the process of defecting to the West.

On all these flashpoints, the crucial test for the Trump administration will be not simply its initial response to some violent action by a Chinese naval or coast guard commander or pilot, or a “civilian” vessel of some kind.

The real challenge will be America’s response to China’s first-level retaliation, and whether Washington is prepared to move up the escalatory ladder. There will be universal calls for restraint, talks, off-ramps, allowing the Chinese to save face, etc. The assumption in all these suggestions will be that the West can be counted on to be reasonable and moderate, whereas the Chinese — and the North Koreans, to the extent there is a coordinated provocation — are unpredictable.

The only way for the United States to escape this escalation trap is to inform Beijing, and Pyongyang, privately and publicly, that we will not be providing them a graceful exit.  Washington’s message should be loud and clear: Don’t say we didn’t warn you.