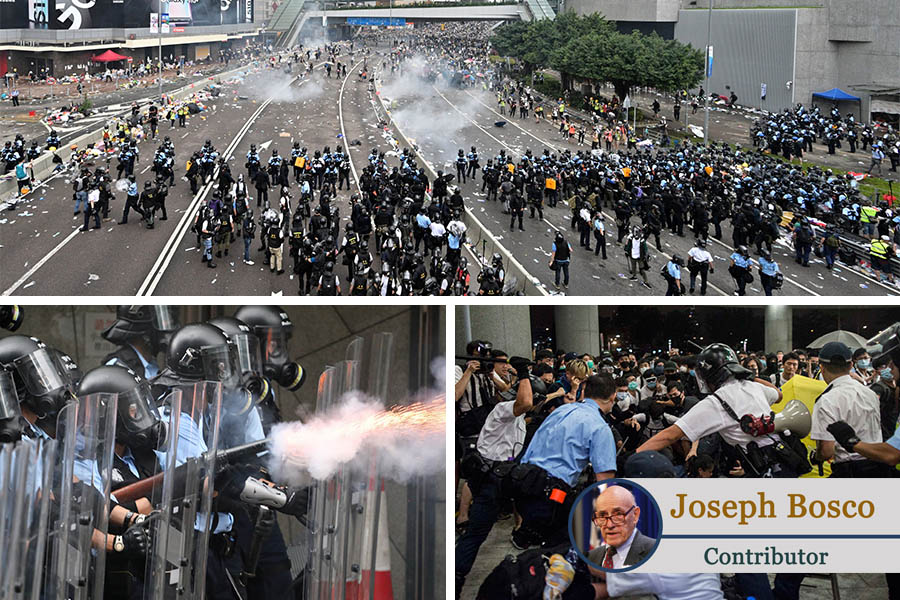 As Hong Kong Stands Up to China, US Should Do the Right Thing — This Time

◎ President Trump, still addressing the consequences of the earlier unconsummated events, faces a new situation as the people of Hong Kong defy Beijing’s further erosion of their guaranteed rights of limited self-government.

At least four times in recent decades, a U.S. president has been presented with opportunities and risks from a popular uprising against an oppressive foreign adversary that threatens American interests. Now President Trump, still addressing the consequences of the earlier unconsummated events, faces a new situation as the people of Hong Kong defy Beijing’s further erosion of their guaranteed rights of limited self-government.

Last week, we observed the 30th anniversary of the Tiananmen Square massacre. In 1989, thousands were killed or wounded when millions of Chinese demonstrated peacefully in Beijing and other Chinese cities for political reform of the ruling Communist Party and were met by the guns and tanks of the People’s Liberation Army.

President George H.W. Bush kept an unseemly low profile during the horrific events that shocked the world, but sent his national security adviser to assure China’s leader, Deng Xiaoping, that U.S.-China relations would not change. Henry Kissinger, an informal Bush adviser and paramount U.S.-China hand, said Deng had acted to keep order in the nation’s most important public space as any leader would.

In 2009, Iran’s population rose up against the tyrannical Islamist regime that, for 30 years, had been crushing their aspirations for freedom and modernity while also spreading terrorism in the region and threatening the United States and its citizens. Despite desperate pleas for help from the Iranian people, President Obama refused to provide either material or moral support and the revolt was crushed. Meanwhile, the ayatollahs proceeded with their anti-Western campaign of terrorism, provocation and nuclear weapons development.

In 2014, the people of Hong Kong demonstrated peacefully against Beijing’s violation of its commitments to autonomous local elections under the “one country, two systems” arrangement promised both Hong Kong and Taiwan by Deng in the early 1980s. The Obama administration again decided that interfering in another country’s domestic affairs — even with words of encouragement for people who shared America’s values — would further endanger already tense relations with a despotic regime that did not wish America well. Hong Kong’s “umbrella movement” petered out and the People’s Republic again stifled the Chinese people’s wishes.

In Venezuela, the Russian- and Cuban-supported dictatorship of Hugo Chávez, followed upon his death by his protege Nicolás Maduro, so corrupted and destroyed the economy that the population is on the verge of starvation. As a candidate, and then as president-elect, Trump warned that he would take action against the anti-U.S. despot.

After Maduro’s challengers refused to recognize the results of the 2018 Venezuelan election, claiming irregularities, the Trump administration led the international community in declaring his rule illegal and recognized Juan Guaidó as the legitimate interim president pending a new election. The U.S. worked with Guaidó and the political opposition to arrange a peaceful transfer of power, but Secretary of State Mike Pompeo said Russia’s intervention foiled the plan.

The Iran and Venezuela crises remain unresolved, and now the Trump administration must decide whether to throw at least its moral support behind the million Hong Kongers who rallied against Beijing’s plan to change the autonomous region’s extradition laws so that China can get its hands on Chinese living abroad who express views at variance with the Chinese Communist Party line.

With all the pressing foreign policy challenges already on its plate, it would be easy for the Trump administration to look the other way on Hong Kong’s plight, especially given the fraught relations with China on trade, Taiwan, the South China Sea and more. But, aside from the moral and legal reasons for supporting the Hong Kong people’s cause, there are strategic considerations as well.

The fates of Hong Kong and Taiwan have been inextricably linked ever since Deng promulgated his “one country, two systems” formula for both.

The Taiwanese people long ago decided they are not interested in surrendering their democratic system for a communist dictatorship. The horrific events at Tiananmen in 1989 and all that has happened under Beijing’s rule since, especially under Xi Jinping, have deepened Taiwan’s resolve to remain free and democratic. That is clearly in synch with America’s values and interests.

Taking a strong stand in support of Hong Kong’s people, even without a formal legal obligation, would greatly reaffirm Washington’s commitment to Taiwan under the Taiwan Relations Act and other congressional declarations of deep U.S. ties with Taiwan. And it is surely the right thing to do for Hong Kong.